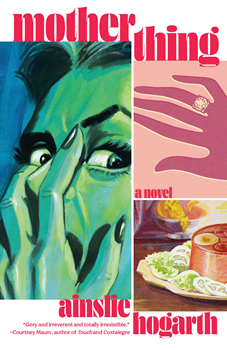 Of all the potential horrors in the realm of the dreaded mother-in-law, our fears tend to go toward “Will she like me?” or “Arm yourself for this family holiday, folks, we’re in for a showdown.” Rarely—hopefully never—will it veer toward “If she dies, will she come back as an evil spirit and haunt my husband and me for the rest of our lives?” (Note to my mother-in-law, Barb: Please don’t do this. I adore you. There is no need for haunting. Please.)

Unfortunately for Abby Lamb, her mother-in-law is very much in the “demonic haunting” category when it comes to her son and his wife. Yes, you read that right—in Ainslie Hogath’s novel MOTHERTHING, we are treated to the worst mother-in-law experience of all time: aggressive, vengeful haunting.

But when Laura’s inability to care for herself became too pronounced, Abby and Ralph moved in to help. Laura was thrilled by Ralph’s presence. Abby’s? Not so much—and Laura made that known every day.

This unpleasantness could have gone on for years, but soon Laura slit her wrists in the basement—ruining the carpet in the process. More relieved than anything at Laura’s passing, Abby felt that life could now move on. She and Ralph would clean up the house, sell it, move into a suburb, and finally have a kid. 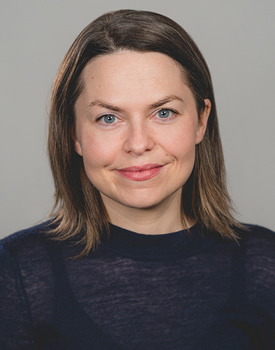 Unfortunately, Ghost Laura had a different plan—one that involved an insidious emotional component that would render Ralph unable to fight back, stuck in the jaws of a psychotic depression, leaving Abby to watch her husband be slowly sucked dry by his not-so-dead mother, powerless.

Powerless until she turned to her worn copy of Secrets of a Famous Chef.

A note to readers: Hogarth’s MOTHERTHING is sharp and uncomfortable. These characters will leave your guts churning and your head swimming. It’s a haunting book, but not the gothic romance or the gory jumpscare kind. This haunting is deliberate, unsettling, and reads like the sensation you get after licking a battery—sharp and bitter but intriguing. Turn to it when you want something different, when you’re done with the traditional ghost story and need something unusual to sink your teeth into.

In this exclusive interview with The Big Thrill, author Ainslie Hogarth talks with us about traditional gender roles, the dual nature of toxic masculinity, and yogurt.

Let’s start with the basics and expand outward. What inspired this book?

It’s funny because these are the questions that I find hard to answer. I don’t know. It feels like it just came to me one day, but probably it was knowing that helpless feeling of loving somebody with a mental illness. It’s terrible, obviously, for the person with the illness, but caring for a person with mental illness is also awful. In the context of a traditional marriage where the woman is tasked with being responsible for her husband’s health in every way, shape, and form… being up against something like major depression is horror to me. It’s horrible.

After I finished it, I was trying to figure out what time period MOTHERTHING was set in and couldn’t quite place it. When is this story taking place?

It’s funny because I have never thought of it as being ambiguous to what time period it was, but there were several Goodreads reviews that were basically, “I don’t know what era this was set in.”

I think part of it is the amazing cover design that Mark Abrams did. It purposefully looks more vintage. But also, Abby constantly references this old book and her ideas about being a wife and mother, which are archaic. But it is set in this time period. There is one instance of a cell phone—a coworker is scrolling through maternity clothes on her phone.

Yes! The book! The Secrets of a Famous Chef! Is that a real book?

It is a real book! It’s Canadian. I don’t know if my grandma got it from her church, but it’s this crappy Canadian cookbook from like 1930. The jellied salmon that Abby makes is a real recipe, and it’s revolting.

Being that this novel is set in modern times, to what do you attribute Abby’s very traditional and conservative mindset on the role of a wife? 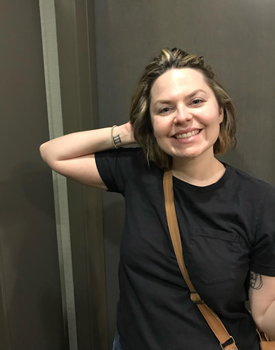 In a lot of ways, I don’t think the idea of traditional wifely duties is gone.

I think we see them acted out frequently but don’t notice when it happens. Like when your friends take care of their husbands. I was at a friend’s house, and another person had brought this huge tin of cookies. My friend’s husband sat down and was going to town on the cookies and my friend, without even thinking about it, just took them away from him. It was like, “Oh, this idiot’s eating too much, I have to take it away from him.” You know what I mean?

There’s this sense that once men get married, they get to offload the problems of their physical and mental health onto their wives. Those issues become the wife’s responsibility. She has to take care of him.

Abby definitely has an extremely archaic mindset about being a wife, which is shown by the Secrets of a Great Chef book. But I don’t think the way she acts is something that’s not present in relationships now—and in unexpected people too.

There was a moment where Abby was thinking about her relationship with Ralph and made the comment that you have to be real for a man to love you, that a man loving a woman legitimized her as a person. She was frequently going back to the worry that, without the existence of Ralph in her life, she would no longer be a real person.

Abby’s mom was chaotic unless she was with a man, and then she would straighten him out. She would start to cook and clean the house and become a real person, instead of a chaos person. That’s where Abby received that message that a person is made real by the love and recognition of another person. On your own, you’re nothing. But then you’re made real by intimate relationships. That’s where you’re real. Does that make sense?

Yes, that makes sense. But it also felt like Abby believed that Ralph was real on his own, without the love of another person. So is it Abby who is not real without love, or is it all women?

I do think that there’s a sense of women feeling more validated by a man loving them than men feeling validated by a woman’s love. Just look at the classic rom-com story or any romances or comedies for women throughout history. The ultimate end is getting married. That’s your goal, that’s your achievement badge. You feel bona fide when you achieve marriage. And obviously that’s not true. But we’re trained to believe it is.

So Abby is a little velveteen rabbit, and if Ralph loves her enough she’s going to be a real rabbit. In this situation, what is the definition of being “real” as a woman? What is a “real” woman for Abby? 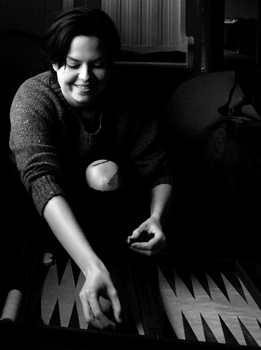 Can you explain to our readers the context of a “yogurt type” and how that comes into play in the book?

The wires have not been crossed; everything is working properly there. The yogurt types have received the message, and they really feel it. Whereas it’s a lot of work for Abby to be like that.

The primary conflict in the book is about Ralph: Ralph’s attention and Ralph’s love and being made real by Ralph. Both Abby and Laura—Ralph’s mom—can’t be real women without his love. They can’t exist without him.

That’s what makes Abby’s head her head. It’s her center, her only motivation, her everything. Everything is Ralph and keeping Ralph and making sure Ralph’s happy. That’s her voice in a lot of ways too, that’s what makes the character.

So Abby is meaningless without Ralph, at least in her mind, and Laura is detached from life without Ralph. Both of these relationships make women’s relation to men and paying attention to men a major feature of MOTHERTHING. Can you talk about that decision?

Toxic masculinity is a topic I’m really interested in at the moment. My next book is about this as well. I love men. Men are fine. I just cranked this toxic aspect of relationships to 11 in this book. Like my friend with her husband and the cookies; that’s a scenario that—after noticing it—I realized, oh my god, I see that a lot, these minor ways that women take over things for their husbands. So it is about men, but more about that: these things that are taken for granted in heterosexual relationships that are actually very weird and not okay.

Most of the time when we think of toxic masculinity, we think of the harm caused by male privilege. But there’s a different side to it, one we see in MOTHERTHING. Ralph is a loving husband, but he puts all the weight of his care onto Abby, which is its own form of toxic masculinity. He spends almost the entire book in a major depressive episode but never seeks professional help. 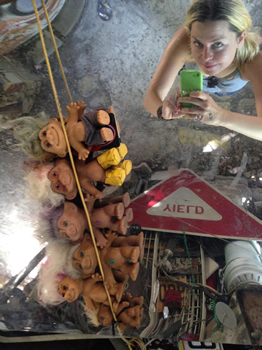 Hogarth with an assembly of troll dolls, much like the ones that will creep you out in MOTHERTHING

So his depression allows Abby’s extent of response, allows her to do all of the stuff that has been working on her throughout her life. In a way, Ralph could be anyone for that stuff to come into play. She could have applied her brand of insanity to any man.

But, yes, it is toxic to be ill like that and have other people take care of it for you, and it’s a thing that you do see in real relationships. It’s sad how common it is. Men will just shoulder serious depressive episodes with no real help except for the woman they live with and, much as it’s sad, it’s also like a very shitty thing to do to your significant other.

So in this case, toxic masculinity isn’t based in privilege, but in social expectations. Expectations that are toxic to men in regards to what is considered desired masculine behavior.

That’s exactly right. There is that part of toxic masculinity where you’re not supposed to be in touch with your emotions and things along those lines. That is part of the conversation as well.  It’s the thing that we know but don’t often associate with the idea of toxic masculinity—that it is harmful to men as well as women.

Ghostly trappings aside, what would you say this story is about “for real”?

That’s a good one. Ultimately, if you were going to boil it down to one thing, this is a book about depression. That’s what it’s about.

What would you like to shout out into the depths of the Internet, what are you working on?

I finished another novel that’s going to be coming out in either 2023 or 2024, I’m not completely sure yet. It’s about a new mom who is a stay-at-home. She doesn’t have much of a career and starts to become extremely scared of something happening to her husband. She realizes that she’s allowed herself to become financially vulnerable and decides to do something about it.