Thirteen Years and Tons of Rejections 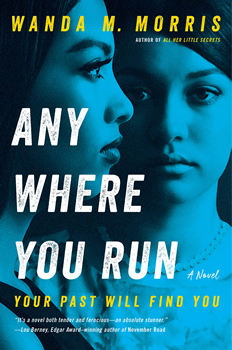 It’s what every writer dreams of but few achieve—a novel that hits the shelves like a tornado, scooping up accolades and awards with the power of a thousand winds. Georgia author and practicing attorney Wanda M. Morris is one of the few to ride that tornado. Her debut, All Her Little Secrets, blew up the crime writing world. Not only was it critically acclaimed by the major reviewers, it was named one of the “Best Books of 2021” by Hudson Booksellers, selected as a Book Buzz Pick by Good Morning America, and serialized in Entertainment Weekly. It won the 2022 Lefty Award for Best Debut Mystery Novel and the 2022 Georgia Author of the Year for Best First Novel and was nominated for an Anthony, the Macavity, and the Strand Critics Award. It was clear this was a woman on the rise—but it wasn’t always that way. Asked how she reached such an unexpected level of success, Morris replies, “The hard way—13 years and tons of rejections!”

Morris has always enjoyed writing. “In fact,” she says, “I decided being a lawyer would be a good fit because lawyers must read and write so much. But it’s a different type of writing. So even while practicing law, I still yearned to create original stories.” She started a draft of All Her Little Secrets and wrote approximately 75 percent of it. Then she put it away—for seven years. “I convinced myself that nobody would want to read about a 40-ish Black woman who worked with really awful people. I think people want an escape when they read a book and who would want to escape to the world I had created in this book?”

But the characters in All Her Little Secrets would not stay out of her head. Stuck in traffic? Their voices came creeping in. Trapped in an overlong meeting? She’d find herself musing about their lives. Then she had a health scare that changed the way she looked at her own life. 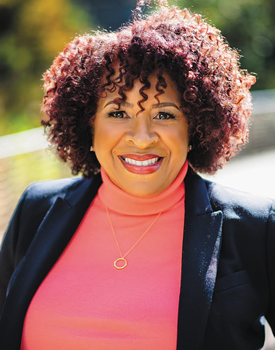 She says, “As the late poet Mary Oliver wrote, what would I do with my ‘one wild and precious life’? I pulled out the manuscript. When I read it again, I knew it was awful, but that was okay. All first drafts are bad. So I went about making a bad manuscript better. I enrolled in online and in-person writing courses. I attended workshops and entered contests. And most importantly, I made friends with other writers and built a community of support through groups like Crime Writers of Color and Sisters in Crime. I did everything I could to learn the craft. And every time I got a rejection or a setback, I reflected on the lyrics of a gospel song that had become my mantra. The lyrics state, ‘I almost gave up. I was right at the edge of a breakthrough but couldn’t see it.’ I didn’t want to give up before I saw my breakthrough.”

She still finds it hard to believe the enthusiasm with which the book was received. It changed her life. “Not just because it was successful, but because it was a book that taught me that I could do the thing I was most afraid of. For years, I believed that writing a book was something beyond my reach. But I stepped out on faith and took a chance on ME, and it paid off. Now I get to do the thing I love—write books.”

Of course, as a ragingly successful debut novelist, she now faced an even greater challenge. She had to do it again.

Morris delivers a talk on writing thrillers to the Atlanta Writers Club.

Her second novel, ANYWHERE YOU RUN, is a prequel to All Her Little Secrets. Asked what led her to take her story back in time, Morris says, “I had just finished writing All Her Little Secrets. The country had just come through the aftermath of the 2020 election. States like Georgia and Texas began to enact state laws that made it much more difficult to vote, particularly for the disenfranchised, the working class, and the elderly. It reminded me of the times my mother told me she was unable to vote when she lived in Birmingham, Alabama. I had a character from All Her Little Secrets that continued to ramble around in my head long after I finished writing that book. I thought it might be interesting to put a face on an aspect of the civil rights movement that still continues to plague us to this day—equity at the voting polls and what that means for full and fair equal rights in this country.” 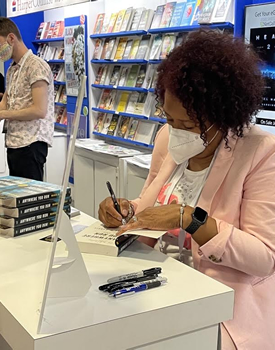 Morris signs books at the ALA Conference held in Washington, DC.

Morris describes ANYWHERE YOU RUN as a coming-of-age story of two young Black women in the South and how their lives are impacted by the emerging civil rights movement of the early 1960s. “The book opens with the murder of three civil rights workers in Mississippi—two white and one Black. Against this backdrop, Violet Richards is brutally attacked. She kills her attacker and flees before anyone can find the body. Her older sister, Marigold, is in trouble too, but of a different sort. She is unmarried and pregnant. When the police come to her door looking for Violet, she decides that it is better for her to flee too and that in doing so, it might solve her problems. But what the women don’t realize is that their problems will only get worse, because a man from Mississippi is hot on their trail, and he has some dark secrets and a very unique motive for finding the two young women.”

Morris hopes ANYWHERE YOU RUN will spark conversation in our badly divided country. “I hope people will see the unfortunate parallels between what happened in 1964 and what is occurring today in 2022. The unabashed whittling away of a woman’s right to govern her own body, a slow eradication of voting rights, incessant police brutality, society’s problem with queer people, and of course, the unending racism and inequality in this country.”

Despite its focus on serious subjects, ANYWHERE YOU RUN is an entertaining read. It’s also exceptionally well researched. “I owe a huge debt to the Auburn Avenue Research Library on African-American Culture and History located here in Atlanta,” Morris says. “I spent hours there culling through books and documents on the civil rights movement of the early 1960s. Researching things like Medgar Evers’s work to secure voting rights for Black Mississippians and the murders of James Chaney, Andrew Goodman, and Michael Schwerner, three Freedom Riders who were trying to help Black Mississippians get the right to vote.”

Morris speaks at the One Book, One City event with Julia Davis, owner of the Book Worm independent bookstore in Georgia.

Some of the research was emotionally grueling, she explains, particularly pictures and first-hand accounts of the lynchings and beatings of Black people and civil rights activists. “Something that surprised me, but it shouldn’t have—women were not allowed to obtain credit in their own name without a cosigner. Married women were required to get their husband’s permission and his cosign to obtain credit. Also, there were no rape shield laws, so women were often blamed for being attacked because of their clothing or their background. It was tough to be a woman in the early 1960s, especially a Black woman in the South.”

As one might imagine, between her law practice, her family, and her writing career, Morris keeps a busy schedule. Her morning prayer and meditation ground her, clear her head, and free her creative energy so she can get back on the tornado. “Right now, I am writing a contemporary novel about a young woman who must rise above her personal insecurities to save a Black landowner in Georgia’s low country when she uncovers an illegal scheme that threatens to undo the legacy and generational wealth of disenfranchised families, including her own. The story explores what it means to have a home and how difficult it is for disenfranchised families to build a legacy of generational wealth for those they leave behind.”