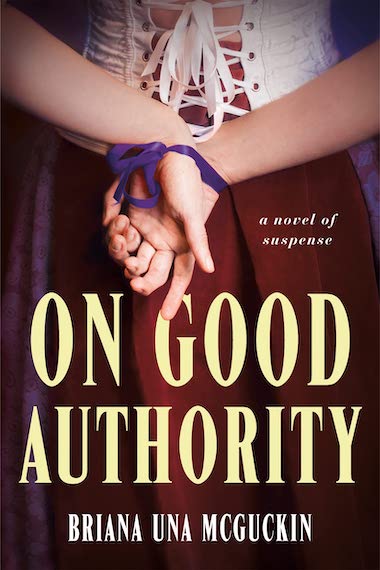 When lady’s maid Marian Osley and footman Valentine Hobbs assume their positions at the clifftop estate of Valor Rise, they already share a history. Raised together as paupers in a London workhouse, they escaped through games of imaginary crimes and sublime punishment. Now they’ve been unexpectedly reunited—in subservience to the brooding Wythe Bornholdt and his frail wife, Diana. A master and mistress with their own dark secrets.

“Don’t stop ’till you get enough…which you won’t.” ―P. J. Vernon, award-nominated author of Bath Haus

“McGuckin pens the kind of book that draws all attention and then ambushes with deadly secrets. Delicious, seductive, dangerous, ON GOOD AUTHORITY keeps us bound tight to the page. Wouldn’t have it any other way.”- Hailey Piper, Bram Stoker Award-winning author of Queen of Teeth

Character. Everything flowed out from one scene I could not get out of my mind, of these two adolescent workhouse inmates pretending—acting out the arrest of their respective parents. I knew they’d snuck off, that they were hiding behind hanging laundry, and that they were getting something out of the power play that they didn’t understand. They had no control over their lives except when they were together, and that made the game—and the bond of these two characters into their adulthood—precious to them. 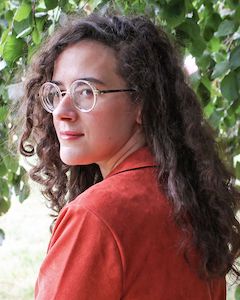 The biggest challenge was treating the protagonist fairly as she discovers this alternative sexuality in the repressive Victorian era. Marian meets with both BDSM and abuse in the book because I wanted to draw the line between them for a society that sometimes conflates the two. I show her having a positive reaction to being submissive, and a negative reaction to being subjugated against her will, which confuses her very much. But I want the difference consent makes to be very clear to the reader, meanwhile. That’s the biggest opportunity, as well as the biggest challenge: drawing that line as clearly as I could.

One of the characters sort of turned into my stepmother as I was drafting. She died over a decade ago, but I found myself grieving her again on the page—and not just her, but the relationship we could have had if I had understood her situation a little better when I was young. No spoilers, but there’s a thread of the story that is my apology to her, for what she went through alone when I could’ve been there.

Two-thirds of the way through reading it, my mother called me to ask how I sleep at night, then cackled. I’m not sure if that tells you more about the book or my mom. I think it’s a wonderful endorsement of both of them.

I didn’t know what to call the sorts of stories I wrote before I read Rebecca. That beautiful, haunting book showed me where to begin searching for my place in publishing. Meanwhile, Thomas Hardy showed me how to take society to task with fiction, all the while writing in a heartfelt, gentle way for the wronged individuals living in it. I have a lot of Socratic dialogues echoing in my head, too, reminding me that complex philosophical ideas can be expressed in simple, often humorous, discussion.

What sort of research did you do for this book?

Tons—I’m an academic research librarian by day, so I’ll look for any excuse! I dug up a handbook for footmen and a handbook for ladies’ maids, which—on top of giving me lots of specifics about servants’ day-to-day-lives—put in sharp relief some tragicomic gender differences. The lady’s maid handbook advises women to keep themselves clean, well dressed, and always well behaved because God will treat them better for clearly caring about themselves. It’s written as if the woman servant’s job is holy. Meanwhile, the footman’s handbook is a bit gruffer and advises things like (I’m copying from my paraphrased notes, not quoting the text), “Don’t go into the pub saying you’ll just have one, mate. You won’t, and you know it.”

Briana Una McGuckin lives in a charmingly strange old house in Connecticut. She has an MFA in creative writing from Western Connecticut State University and an MLS from Long Island University. Among other places, her work appears in the Bram Stoker Award–nominated horror anthology Not All Monsters, the modern gothic horror anthology In Somnio, and The Lost Librarian’s Grave anthology. McGuckin has spastic diplegic cerebral palsy, a perhaps concerningly large collection of perfume oils, and a fascination with all things Victorian. For more information visit www.brianaunamcguckin.com.