Protecting the World’s Most Famous Woman 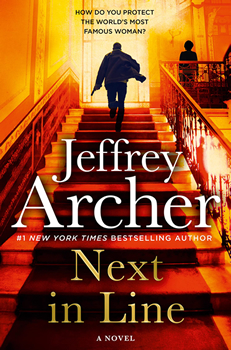 At the same time, rival art collectors vie for control of a multimillion-dollar collection. While Warwick’s wife, Beth, an art expert, tries to thwart a criminal, Warwick and Hogan, along with the rest of their team, uncover a far greater danger to Princess Diana and the nation. If they fail to stop this threat, many lives—and the Crown itself—could be at risk.

NEXT IN LINE, fifth in acclaimed author Jeffrey Archer’s William Warwick series, launched last week. The Duchess of York calls it “another fantastic read” and adds, “His portrayal of Diana captures her essence from the first page.”

Archer is the New York Times bestselling author of more than 29 novels, as well as screenplays, plays, and nonfiction, with sales of more than 275 million copies in 97 countries.

Archer shares how this popular series came to life. “After the Clifton Chronicles, [Editor’s note: his last series] I’d always intended to write about Harry Clifton’s eponymous hero, William Warwick, a young man who, when he leaves school, wants to join the Metropolitan Police Force rather than read law and join his father in chambers. 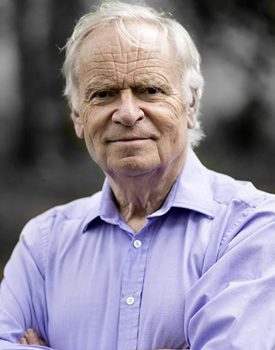 “Like all authors, I wanted to be a little different, so I decided I would take William from a constable on the beat right through to ending his career as commissioner of the Met, which I currently think will take eight books—I’m writing the sixth at the moment,” Archer says. “I also wanted each book to be an individual story in its own right, where William would be moved to a different department as he rises through the ranks. So having tackled art fraud, drugs, police corruption, and murder, he’s now heading up the royalty protection team. I had the privilege of working for Princess Diana as a charity auctioneer and got to know her well over many years, and I hope readers will agree that I captured her warmth and humor.”

Warwick is an intriguing hero.

“William, unlike his close friend, Inspector Ross Hogan, is nicknamed the ‘choir boy,’ which tells you everything you need to know,” Archer says. “He’s a thoroughly upright, decent man, whose single purpose is to imprison any evil people he comes across. However, as the years pass, he becomes less naïve and a little more cynical, but never loses his quest for justice.” 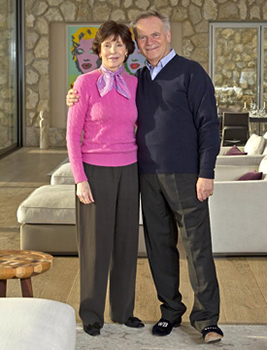 Archer and his wife, Mary, at their home in Mallorca, Spain

“William’s wife is based on my wife Mary, who is currently chair of the Science Museum Group,” he says. “Once again, I was able to draw on Mary’s fascinating and successful career and put it into a book, but then I’ve always enjoyed writing about strong women. My mother was a [member of a local town council] 70 years ago, when it wasn’t fashionable for a woman to be involved in politics. I had the privilege of working for Margaret Thatcher for 11 years. So the inspiration for the strong women in my books comes from having known these three.”

Besides Ross Hogan, some of the more checkered characters in the Warwick series include Beth’s friend, Christina Faulkner, and her husband, Miles, who is serving a prison term. What inspired these characters? “I’ve had a privileged and interesting life in politics, art, business, and charity,” Archer says, “and indeed, met some fascinating people from these different worlds. I confess I steal real characters and put them into my books. Not only the good ones.”

Archer didn’t begin writing fiction until the age of 34. His debut novel, Not a Penny More, Not a Penny Less, was turned down by 15 publishers before being picked up, he says. He believes his first two books enjoyed moderate success, but his third, Kane and Abel, sold 150 million copies worldwide. Its success came as a “massive surprise.”

Archer at the Jaipur Literature Festival in Rajasthan, India

Known as a master storyteller, Archer begins with a loose outline, but “invariably a new idea will take me in a completely new direction. I usually know only a couple of pages ahead, certainly not more than a chapter, because I can never be sure where the story or the characters will take me. You have to keep the reader guessing and wanting to turn the page, so I’ve always felt that if I don’t know what will happen next, then how can the reader know?”

Twists happen organically, and NEXT IN LINE is full of them. “I’ve always considered myself very lucky that the ideas never stop coming. An idea for a plot twist might suddenly come to me in the middle of the night,” he says. “If they surprise me, they’ll surprise the reader.”

“The idea for the incident that happens with Princess Diana on a yacht came fairly late, because I was looking for one big surprise on which the book could hang,” Archer says. 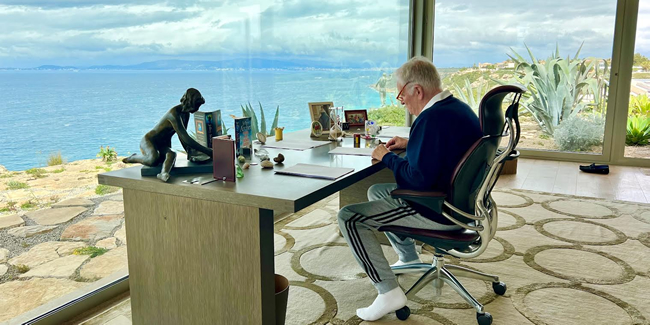 Archer in his writing room in Mallorca

After writing 70 pages, he sought the advice of a retired Special Air Service (SAS) general, “to make sure I hadn’t made any mistakes. Of course, it was littered with errors that he was able to correct immediately. But it’s the story that matters—the errors can always be corrected.”

“I always tell aspiring authors to write what you know, and your readers will feel at ease and believe you’re writing from experience,” he says. “Don’t write a vampire novel just because you think it’s fashionable. I’ve never considered myself fashionable but am grateful that millions of readers want me to continue to be the simple storyteller I am.”

A major influence on his work is that of the German author Stefan Zweig, who immigrated to Brazil prior to World War II. “I think he is the greatest storyteller of the past 100 years and consider Beware of Pity his masterpiece. I also admire Hardy, Dickens, and Austen, but in the end, I’ve decided when I grow up, I want to be Stefan Zweig.”

There’s still plenty of time—and stories—for that. Archer is full of ideas. 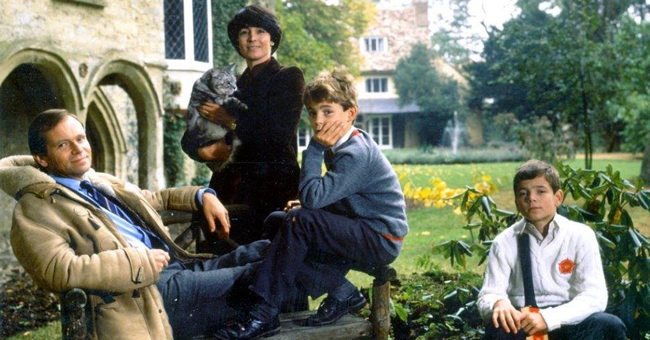 Archive photo of Archer, his wife Mary, and their two children, William and James, in the garden of their Cambridge home (around 1980)

“William will continue as the senior officer in royalty protection with a situation arising concerning the 1937 Imperial State Crown which Her Majesty wore at her coronation…but I won’t tell you more,” he says. “As for going forward, I can see the book after next being about a man who’s wrongly arrested for murder. While I know what William will do as commander, I’m not willing to reveal it yet. Heaven knows what he’ll get up to when he becomes commissioner.”

Beth, Ross, Christina, and the devious Miles also will be back. “I don’t yet know what will happen to them, but I can tell you a large part of the story will center on Thomas Jefferson, Benjamin Franklin, and the ‘Fair Copy’ of the Declaration of Independence.” [The ‘Fair Copy’ of the Declaration is a markup considered to be the first official copy; however, it is not known whether it still exists.]

Archer divides his time among London, Cambridge, and the Spanish island of Mallorca, where he drafts his stories in pen. He writes for six weeks in January and February, five weeks in March and April, and two or three weeks in June. His assistant later transcribes his work.

“I need complete silence, so I have a specially built study—no phone and away from the main house, with a beautiful view overlooking the Bay of Palma. I’m also very disciplined, doing four two-hour sessions each day, seven days a week.

“I’m now 82 years old and still enjoy writing. When I don’t, I’ll stop. But I can’t do that at the moment because I have to live long enough to make sure William Warwick becomes commissioner. Though he’ll have to face one or two problems on the way…”