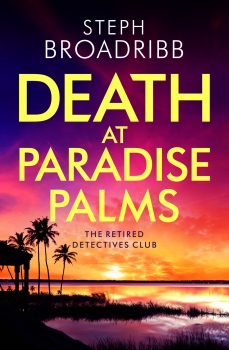 When movie producer Cody Ziegler goes missing from The Homestead’s Millionaires’ Row, his wife, retired actress Olivia, immediately claims there’s foul play afoot. A million-dollar ransom demand soon follows, with clear instructions not to involve the cops. In desperation, she enlists the help of Moira, Rick, Philip, and Lizzie, aka the Retired Detectives Club. Racing against the clock, the four retirees set to work. Sure, Cody had enemies—there’s a disgruntled employee, a jilted filmmaker, and a hundred other people who know how much he’s worth. But when it emerges that Cody’s apparently perfect marriage isn’t what it seems, even Olivia isn’t above suspicion. When Cody’s car turns up in a nearby lake with a shocking surprise inside, the case becomes even more complicated. Can Moira and the gang find Cody before it’s too late? Or will this case see them lose in more ways than one?

I got the idea for the Retired Detectives Series when I was out in Florida staying with my stepmom, Donna, after my dad died. She was thinking about moving to one of the 55+ retirement communities nearby, and so we went on a tour visiting them. I was fascinated by them and in awe of all the amenities they offered—pools, tennis, pickleball, golf (a lot of golf), dance classes, arts and crafts classes, yoga, and a lot of restaurants. It felt as if living there would be like being permanently on a luxury holiday but almost too wonderful to be “real life.” It got me thinking What if there was a shadow side to living in a place like that?—and that’s where my fictional “The Homestead” luxury over-55s community setting and the series idea came from. 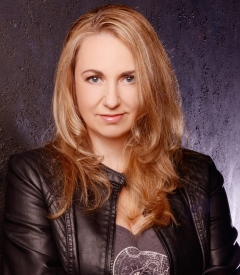 I really wanted my characters to be older (my four main characters range from mid-50s to early-70s in age) but still showing their skill at solving cases and being right in the middle of the action. After all, 60 is the new 40! I love the amateur sleuth and small-town elements of cozy mysteries and felt that my fictional luxury retirement resort and four retired law enforcement characters would be a good fit for the genre as they put their skills to work within their close-knit community.

I like to put a nod to one of my writing heroes in each of the books in this series by having a character reading one of their books. In the first book in the series, Death in the Sunshine, one of the guards in the security hut had a Lee Child novel open face-down on their desk. In DEATH AT PARADISE PALMS, one of the main characters, Lizzie Sweetman, is sitting in her kitchen reading a book by Michael Connelly when she receives the call to join a new investigation.

Steph Broadribb was born in Birmingham and grew up in Buckinghamshire, England. A prolific reader, she adored crime fiction from the moment she first read Sherlock Holmes as a child. She’s worked in the US and the UK, has an MA in creative writing, and trained as a bounty hunter in California.

Her other novels include Death in the Sunshine (book one in the Retired Detectives Club series), along with the Lori Anderson Bounty Hunter Series and the Starke & Bell psychological police procedural books (writing as Stephanie Marland). Her books have been shortlisted for the International Thriller Writers Best First Novel award, the Dead Good Reader Awards, and the eDunnit eBook of the Year. She provides coaching and mentoring for new writers via www.crimefictioncoach.com.