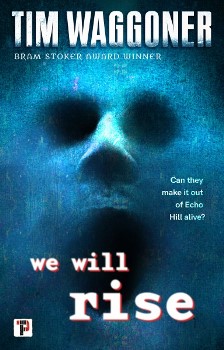 In Echo Hill, Ohio, the dead begin to reappear, manifesting in various forms, from classic ghosts and poltergeists to physical undead and bizarre apparitions for which there is no name. These malign spirits attack the living, tormenting and ultimately killing them in order to add more recruits to their spectral ranks. A group of survivors come together after the initial attack, all plagued by different ghostly apparitions of their own. Can they make it out of Echo Hill alive? And if so, will they still be sane? Or will they die and join the ranks of the vengeful dead?

Tim Waggoner recently spent some time with The Big Thrill discussing his latest thriller, WE WILL RISE:

I’ve been a horror fan all my life, and I love the genre in all its forms. Nothing stimulates my imagination like horror. Anything can be in the dark, anything at all. 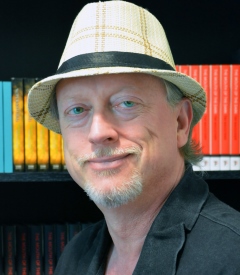 I love playing with tropes in horror, subverting them, combining them, and seeing what kind of stories result—ones that (hopefully) are unlike any people have read before. I hope that WE WILL RISE will be a unique addition to the canon of ghost stories.

Ever since I was a child, I’ve wondered what was so scary about ghosts. They never seem to be able to affect the material world very much, and even if they could, so what? They’re proof of life after death. If they kill you, you become a ghost too, and then you’re on an equal playing field with them. With WE WILL RISE, I wanted to come up with a different rationale and motivation for ghosts and make them into a serious, deadly threat, while also doing something original with them.

I was originally inspired to write this book by driving past a street named Resurrection Road. My first thought was to write a story about a ghost invasion on a single street, but eventually I decided it would be a lot more fun to write about a ghost apocalypse, where ghosts appear throughout the world and start attacking people. Why destroy a single street when you can destroy the world?

There are so many! Stephen King for his characterization and sense of place. Dennis Etchison for his use of atmosphere. Ramsey Campbell for his unique spins on horror tropes. Shirley Jackson for the psychological depth in her fiction. Bentley Little for his surreal story concepts. Thomas Ligotti for his writing style and bleak nihilism, Lovecraft for his expansive imagination. David Lynch for his unconventional dreamlike narratives and his slowly mounting sense of dread. Clive Barker for his fusion of horror and fantasy.

Q: What do you feel are defining traits of your horror fiction?

A: I balance bizarre and surreal events with in-depth characterization to make the unbelievable believable and more grounded. At its core, my horror fiction is psychological, with the inner world made outer, and vice versa.

Critically acclaimed author Tim Waggoner has published over fifty novels and seven collections of short stories. He writes original dark fantasy and horror, as well as media tie-ins, and his articles on writing have appeared in numerous publications. He’s a three-time winner of the Bram Stoker Award, has won the HWA’s Mentor of the Year Award, and been a finalist for the Shirley Jackson Award, the Scribe Award, and the Splatterpunk Award. He’s also a full-time tenured professor who teaches creative writing and composition at Sinclair College in Dayton, Ohio.