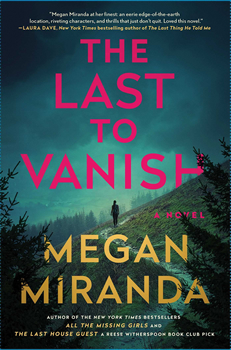 Megan Miranda, author of the New York Times bestselling novel, All the Missing Girls, and Reece Witherspoon Book Club pick The Last House Guest, is back with another breath-stopping novel of suspense, THE LAST TO VANISH.

In her new novel, Miranda takes us to Cutter’s Pass, an outdoorsy tourist town adjacent to the Appalachian trail where, even though Abby Lovett has been living and working at The Passage Inn for ten years, she’s still considered a newcomer.

Cutter’s Pass should be a bucolic setting nestled into the wilderness of North Carolina; however, it’s known as The Most Dangerous Town in the State. In the last 25 years, six hikers have disappeared on the trails outside the town. Vanished. Without a trace.

The latest missing person is Landon West, a journalist who’d been asking questions about the disappearances. When Landon’s brother, Trey, appears in The Passage Inn on a stormy night, Abby takes pity on him and lets him stay in the room Landon had rented before he vanished. But Trey’s arrival revives Abby’s own questions about the missing hikers, and she begins to attract dangerous attention as she unearths long-buried secrets.

The Big Thrill was delighted to sit down with Miranda to hear all about her journey into writing, having characters with so many secrets, and using the woods as inspiration.

Your characters like to spend quality time in the woods. The woods in this novel and Cutter’s Pass, the little town next to it, oscillates between being a place of peace and a place of sinister intentions. What is it about the woods that inspires you to craft worlds where both peace and violence can coexist? 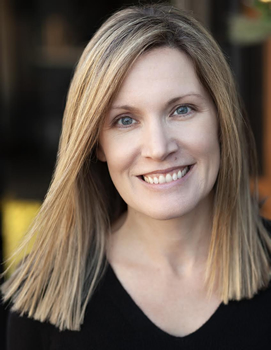 The heart of where I’m starting [in my writing] is the duality within a setting. I’m fascinated that a place can be both a place of safety and a place of danger at the same time, and that really depends on my character’s perspective. When a character’s afraid, everything takes on an element of danger. My grandparents had a cabin in the Poconos in the woods, and it was totally off the grid—no phone line and before cell phones—and my cousins and I used to go there in the summer all the time. It was something we looked forward to. There was a lake there, and it was a lot of fun. But then at night my overactive imagination would be like, “what’s out there right now?”

My parents were big hikers, so we spent a lot of time hiking in the woods. I have so many wonderful family memories related to this, but I love this idea that anything can happen out there. There is something really core about the woods where there’s this idea that the legends are so close to being real.

The woods and hiking were very much an escape for Abby away from her job at The Passage Inn, but as the investigation goes on, she begins to doubt her relationship with those woods. How were you able to write that transition from trust to danger?

I feel like every character I write is drawn to the setting [of a novel] because it’s a place they love or a place they feel safe. Whether that’s a close-knit neighborhood, or whether it’s a house alone in the woods, for them, it’s this place of safety. In the process of these stories, you’re stripping away those feelings of safety, and they’re seeing another side to this place that they didn’t know existed.

We have to know—plotter or pantster?

Pantster! I have the structure [this novel is cleverly divided into sections featuring Abby’s investigation into each missing hiker] which I like to think of as almost working like a trail itself. One disappearance leads to the next—a trail she is following leading backwards to the beginning of the mystery. But I don’t have the scenes planned out.

Miranda on a hike

Given that you’re a pantster, when you’re writing your books, how do you decide when and where to reveal the secrets everyone in town seems to be harboring? Because everyone in Cutter’s Pass has a secret in their past worth hiding.

It’s very gradual. You first see the setting and the characters through your main character’s eyes. And then I think of the story not really in the big Ah-Ha twists, but in the little reveals along the way. Each reveal almost changes [your main character’s] perspective. What they thought about a character might not be true and what they thought about the past might not be true. The first domino falls and suddenly the character starts to see if this wasn’t true then what about that? What else isn’t true?

Abby is an outsider in Cutter’s Pass even though she’s been there for a decade. How does her status as a permanent outsider help her in solving the mystery of the hikers disappearing on Shallow Falls Trail?

I think first I try to approach setting like I approach character, where every setting has its own unique history, and everyone has their own relationship with the setting. This town in particular, Cutter’s Pass, is such a small, insular town, and they really own their past, but they also keep their secrets. It’s almost this agreement people enter into to be a part of this world. “This is your home, but you promise not to dig too deeply” because everyone’s pasts and secrets are woven together. So it takes Abby a little while, and she is fortunate to have the backing of Celeste, the owner of The Passage Inn, who says, “This is Abby, she’s trustworthy.”  It allows her to see [the disappearances] from the outside in, in a way that maybe other people can’t because it was maybe them, or their parents, or their grandparents who were under suspicion when these people went missing.

Abby seems content with her routine at The Passage Inn. She’s been there for ten years after seemingly stumbling into the hotel after becoming untethered from her former life when her mother dies. But then Trey West arrives and starts asking questions that send her life into a spiral. What was it about Trey to get Abby to start questioning whether these disappearances were only tragic accidents? 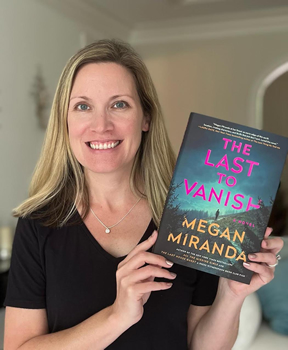 Miranda shows off a copy of THE LAST TO VANISH.

Abby walks this line within the community because she’s not fully an insider. She’s been there ten years, but she hasn’t been there for every disappearance, and she hasn’t had it be a fabric of her upbringing like a lot of the other people do. But she’s not like a visitor to the inn either, who are just coming to hear the stories, so she has this unique perspective right in the middle. I feel like Trey almost does as well because he has some information, and he’s coming to track down his brother.

This disappearance was the closest to her because he was staying at the inn, and she feels a responsibility toward everyone [staying] at this inn. At first, she pushes against that, but she doesn’t want to leave him alone either. She thinks there’s a danger out there, and even if she doesn’t want to face it head-on, she doesn’t want him out in the woods alone trying to find what happened. She wants to keep him safe.

One of the themes in your novel is that sometimes the truth set you free and sometimes it creates an even deeper hurt. Which one is it for Abby? Or is it both?

There’s always that duality. At some point, Abby has to make that decision. Which is the stronger urge? Do I need to know, or do I need to not know? And then accept that what comes with it is something she might not want to find out.

Many authors have journeyed away from their original fields of studies to mystery and thriller writing. Your degree is in biology from MIT. What was your journey like, and how do you use what you learned in your biology course work in your writing?

I feel like in hindsight it looks like there are big leaps within my journey, but it really didn’t feel that way. I grew up devouring books. I grew up loving thrillers, loving mysteries. I loved to write, but I didn’t pursue that first. I also loved biology. I worked in biotech, and then when I moved to North Carolina, I became a high school science teacher. I feel like both of those experiences inform the books I first started writing or maybe sparked the inspiration for them because my first books were YA suspense set in the world of high school and were inspired by the “What If” science idea. So, it felt like more of a natural progression, using questions I’d had in the past to inspire these thriller ideas.

Fans of Miranda’s will be able to attend in-person book events in South Carolina, Houston, Arizona, New York, New Jersey, and Rhode Island this summer and fall. Megan has big plans on the horizon—but nothing she can talk about yet. However, if you sign up for her newsletter at www.meganmiranda.com, you can be among the first to hear what’s next for her.