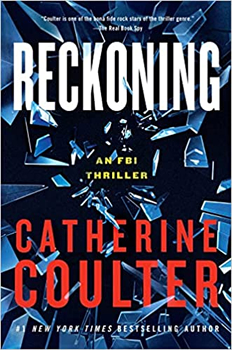 Texas transplant and prolific bestselling author Catherine Coulter, whose sanity saver is a tub of guac and an endless bag of tortilla chips, is back with RECKONING, book 25 in her FBI Suspense Thriller series.

Someone murdered twelve-year-old Allison Rendahl’s parents fourteen years ago and also tried to kill her—but she escaped. After being adopted by her Uncle Leo Mandarian in Australia, Allison became a new person, changing her name to Kirra Mandarian and assisting Uncle Leo with his Extreme Australian Adventure business. She’s an expert in survival and martial arts.

Now, Kirra lives in her hometown of Porte Franklyn, Virginia and works as an assistant prosecutor in the Porte Franklyn Commonwealth Attorney’s Office, with a private mission to find and prosecute her parents’ killers. But to do this, she’s got to break the law with vigilante justice—using the moniker Eliot Ness—and she just might lose her life in the process. 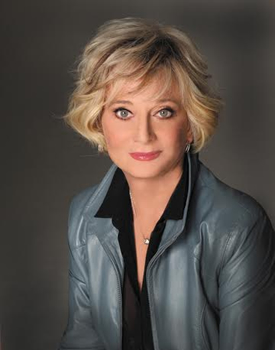 Emma Hunt is a twelve-year-old musical prodigy. Six years ago, a Las Vegas mob boss ordered her kidnapping, and now, someone tries to kidnap her again. But Chicago criminal kingpin Mason Lord—Emma’s grandfather—and her parents will not let that happen.

FBI Agents Savich and Sherlock must investigate clues given to the FBI by the mysterious Eliot Ness and prevent another attempted kidnapping of Emma. But who will win and who will lose?

Below, Coulter talks with The Big Thrill about how the plot for her latest thriller came about through a “brain invasion,” her joy of reading, and her love of Mexican food.

What was your inspiration for the story in RECKONING?

There really wasn’t any “inspiration” per se. Many times, an idea simply invades my brain, and in this case, Emma Hunt, the piano prodigy, already the star in The Target and Backfire, appeared again in full bloom, telling me a new trouble was brewing. Oh my, what could this be about?

As for Kirra Mandarian, I saw a painting of a large yacht on the Potomac. There were three men on the deck, talking, and yet again, the idea invaded my brain—what if they’re drug dealers and someone sees them, recognizes a criminal? What would happen to that someone if/when the bad guys found out they’d been seen? So we’re talking brain invasion here, not any sort of cosmic inspiration. 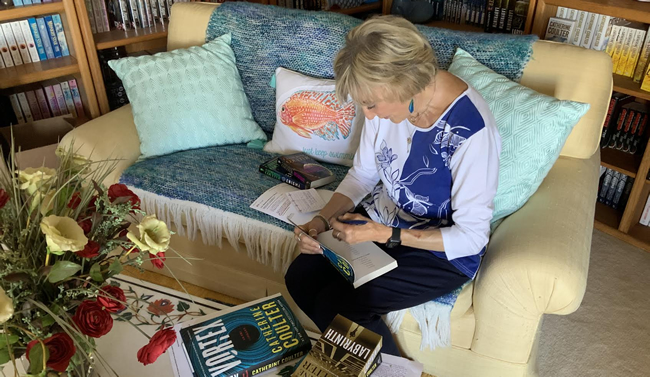 Coulter signs books for her readers.

All I want to do is distract and entertain readers, not send them messages. What I want them to wish for is more pages to read. I make two promises—justice will always be served, and I’ll never knock off any major characters.

Your bio states that at one point you were reading ten books a week. Are you still an avid reader?

When my husband was in medical school, I usually saw him thirty minutes a night, over spaghetti. I read ten to fifteen books a week. Now? I’d say I read three or four books a week, all genres, doesn’t matter. I always hope for magic and many times find it.

Since you’re a Texan, what is your favorite Mexican food? Do you have any plans to set a future book in Texas? 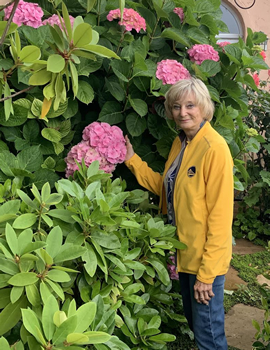 As Will Rogers would have said if he’d thought of it, “I’ve never met a taco I didn’t like.” Wait, I need to amend that—please leave fish tacos in Japan where they serve them with cabbage.

Setting a book in Texas would be tough since Savich and Sherlock are based in Washington, DC. Interacting with other characters is unwieldy when there are time zones and great distances involved. I had to deal with this in RECKONING, and let me tell you, it was difficult, demanded lots of mental gymnastics, so as of this minute, I have no plans to send Savich and Sherlock to Texas.