Features, Latest Books, Up Close
1 week ago
by Jaden Terrell
0

A Double Identity in Fiction and Real Life 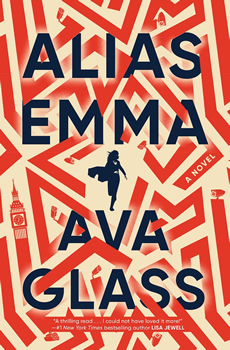 The cover copy for Ava Glass’s new spy thriller, ALIAS EMMA, begins, “Nothing about Emma Makepeace is real. Not even her name.” The same could be said for Glass. Well, at least the part about her name.

Ava Glass is the pen name of a bestselling author whose books have sold more than two and a half million copies. Translated into 25 languages, they’ve been bestsellers in multiple countries. But ALIAS EMMA is a very different book, aimed at a very different audience. As such, the series needed a separate identity—which meant its author needed one as well.

Like her alter-ego, Glass has led an interesting life. She began her professional career as a crime journalist, and at the age of 21, covered her first homicide. Asked what led her to a career as a novelist, she says, “I feel like my writing journey has been less like a series of carefully planned stops and more like an out-of-control train careening from place to place. The only thing I ever wanted to be was a journalist. And after I reached the point that I didn’t love being a reporter anymore, I was quite lost.”

For a while, she became an editor with a publishing house in London. She later took a job working for the government—specifically, for the Home Office, which oversees security and counterterrorism. “My area was communications,” she says, “so I was there to help intelligence agencies communicate better. It was tricky, as the last thing any of them wanted to do was communicate. It was mostly a series of negotiations.”

Rubbing elbows with so many intelligence officers, it was inevitable that she should develop friendships with some. “I suppose I was fascinated by all the things they would never tell me,” Glass says. “In ALIAS EMMA, I get to imagine everything I couldn’t know.”

That personal association with real-life spies may be what makes the spy-craft in ALIAS EMMA so credible. But that came later. Her first novel, written during the author’s tenure at the Home Office, was a “darkly romantic” young adult thriller about a rebellious teenager shipped to a mysterious boarding school. Glass says, “To my astonishment, that series became something of an international hit, which allowed me to write other books.”

That first book, Night School, led to seven more YA novels, three mysteries about a crime reporter, and two co-written young adult fantasies. But through it all, her stint working with intelligence agents niggled at her mind. “I’ve wanted to write about spies ever since my time as a civil servant,” Glass says, “but I didn’t have the right hook for the story. Besides, I was always told that women didn’t read spy novels, so it wasn’t a hot trend for publishers. And yet the story wouldn’t go away. Some stories insist on being written, and for me, this was one of them.”

The seed of the story came to her one evening when she noticed a CCTV camera mounted and pointed in her direction. In an interview with Publishers Weekly, Glass recalls, “When I moved, it moved with me and tracked my progress until I turned the corner. I’ve always wondered what would happen if those cameras were hacked by an enemy state.”

She had her hook. In ALIAS EMMA, London’s 500,000-plus CCTV cameras are hijacked by Russian spies. Emma Makepeace, a fledgling intelligence agent, is charged with delivering the handsome-but-reluctant son of Russian dissidents targeted for assassination into protective custody. But with digital eyes on every alley, street, and gutter, that’s no easy task. Especially when her handler has vanished, and she has no idea who she can trust.

Emma is an intriguing mix of toughness and vulnerability. She’s highly capable but not bullet-proof. While she’s been described as “a female James Bond,” one of the most appealing things about her is that she seems authentically female—a strong, courageous woman who doesn’t come across as a man in heels.

Asked how she developed the character, Glass says, “Emma is loosely based on an actual spy I met when I worked for the government. She was in her twenties but seemed much older than that. She remains one of the most confident and cool people I’ve ever met. She appeared fearless. I knew this person really existed, so I thought if I could build a character loosely based on her, then it would be only inches from reality. In that way, I felt I could write a spy who felt real to readers even while she did things most of us could not imagine doing. If Emma feels real, it’s because reality was my inspiration.”

ALIAS EMMA is full of other memorable characters as well. Among them are Michael, the idealistic young doctor Emma is tasked with saving; Ripley, Emma’s enigmatic mentor and handler; and—Glass’s favorite—Martha, the disguise specialist at the Agency where Emma works. Glass says, “I’m a little in love with Martha. She is reflective of the spies I met, who were so charming and such a pleasure to spend time with but who always revealed little of themselves. Charm is an under-rated attribute, by the way. I rarely met spies who were not charming. Espionage is always a form of seduction. The more relaxed someone feels, the more they will reveal.”

In light of recent events, the re-emergence of the Russian spy as villain seems especially apropos—and especially believable. “I live in the south of England,” Glass explains, “only a few miles from where Sergei and Yulia Skripal were poisoned with a nerve agent left on their door handle by Russian GRU assassins in 2018. It’s hard to explain how extraordinary that attack was. The killers dropped a perfume bottle containing enough nerve agent to kill 10,000 people on the street in a leafy, quiet town in the middle of the English countryside. This was after Alexander Litvinenko was assassinated with radioactive polonium dropped in a teapot in an upscale London hotel where I have had lunch on more than one occasion. These things keep happening on my doorstep. An invisible war is underway all around us. It was begging to be written about.”

Asked if there’s another Emma Makepeace novel in the works, Glass says, “Definitely! In fact, I’ve already written it. In Alias Emma 2, Emma Makepeace is on the trail of Russian billionaires suspected of killing an MI6 analyst. To find the truth, she goes undercover on an oligarch’s superyacht in the Mediterranean. The action takes her to Nice, St Tropez, and Barcelona, but the true danger may lie much closer to home.”