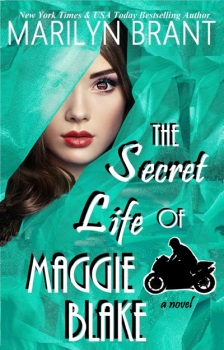 In an affluent Chicago suburb, Maggie Santori Blake, a clever stay-at-home mom with vivid daydreams of a more exciting life, is caught up in a dangerous game of espionage when an elusive motorcycle-riding hero returns to town.

The Motorcycle Maverick’s top-secret government mission puts Maggie’s life, her family’s safety, and her marriage at risk…especially when she discovers that the sexy, highly skilled, and masked special agent is none other than Preston A. Blake III—her seemingly mild-mannered CEO husband.

To protect those she loves, Maggie must not only confront the man she thought she knew and the decade of lies between them, but she’s also forced to put aside her fantasies and become the heroic woman of her imagination.

Marilyn Brant recently spent some time with The Big Thrill discussing her latest thriller, THE SECRET LIFE OF MAGGIE BLAKE:

It was, in fact, an odd combination of all three, but for me, character is usually the clearest part of a new project. I’d had the idea of combining a story featuring a female protagonist who had fantasies of being exceptional and heroic (much like the main character in The Secret Life of Walter Mitty), with a man like her secretive husband (a hero in disguise, similar to a modern-day Zorro or Scarlet Pimpernel), and setting the story in the Chicago area, which is where I live. My novel shares some elements with the film True Lies, but there’s more of a relationship focus and, admittedly, fewer explosions.

I’ve loved reading romantic suspense since I discovered the genre in junior high. The idea of merging the excitement of dangerous intrigue with the power of love and passion was one of the best combinations I could imagine. Like rum cake drizzled with chocolate.

The cross-genre aspect to THE SECRET LIFE OF MAGGIE BLAKE was the most challenging part and, simultaneously, the most delightful to me as an author. I’ve read and greatly enjoyed novels that fell cleanly into just one literary genre, and I’ve written a number of books like that, too. This new novel wasn’t nearly as easy to categorize. At its heart, it’s romantic suspense, but it has other elements woven into the story, which made it fun to write but trickier to describe. The gift that accompanies this challenge, though, is that some of my readers, who know more of my work in romantic comedy or women’s fiction, have told me they enjoyed delving into this world of light suspense and would love more.

I was addicted to Nancy Drew mysteries as a kid. I inhaled them and read 48 books from the series in 4th grade alone. I also loved The Westing Game, Sherlock Holmes, and pretty much any story with secret codes and ciphers. As I got a bit older, the Gothic mystery romances of Phyllis A. Whitney and Victoria Holt became huge favorites, along with Jane Austen’s novels and Baroness Emma Orczy’s Scarlet Pimpernel series. These books captured my imagination, shaped my interest in literature, and sparked my joy of writing. For the longest time, I’d wanted to be a detective when I grew up. Tragically, I lack many of the necessary skills for such a job and, furthermore, am scared of creaky attics, abandoned alleyways, weaponry of all kinds, and creatures one might encounter in a dark cellar.

Marilyn Brant is a New York Times & USA Today bestselling author of contemporary women’s fiction, romantic comedy, and mystery/suspense. Her debut novel, According to Jane, won RWA’s prestigious Golden Heart Award® in 2007, and she was named the 2013 Author of the Year by the Illinois Association of Teachers of English. She loves all things Jane Austen, has a passion for spies, secret codes, mysteries of any kind, travel, music, and chocolate…and spends way too many hours watching “Tasty” videos online. THE SECRET LIFE OF MAGGIE BLAKE is her 21st book. Marilyn lives in the northern Chicago suburbs with her family, analyzing novels for the storytelling website Save the Cat! and daydreaming new plot ideas for her next novel.