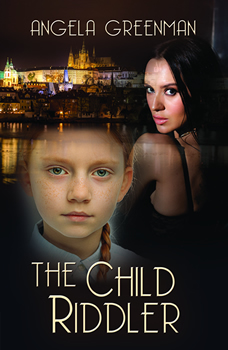 Despite the angry scars she carries from her childhood training, Zoe Lorel has reached a good place in her life. She has her dream job as an elite operative in an international spy agency and found her true love. Her world is mostly perfect—until she is sent to abduct a nine-year-old girl. The girl is the only one who knows the riddle that holds the code to unleash the most lethal weapon on earth—the first ever “invisibility” nanoweapon, a cloaking spider bot.

Zoe’s agency is not the only one after the child. China developed the cloaking bot and will stop at nothing to keep its code secret. While China rapidly hones in on Zoe, her threats grow. Enemies in Austria and Bulgaria reveal the invisibility weapon’s existence to underground arms dealers—now every government and terrorist organization in the world want the nanobot.

From Malta to the Italian Alps to England, Zoe races to save not only the child she has grown to care about, but also herself. Her drug addiction is threatening her engagement to the one person who brings her happiness, yet she needs the agency prescribed pills. They transform her into the icy killer she must be to survive. Can she still be ruthless without the chemicals that suppress her emotions?

Author Angela Greenman spent some time with The Big Thrill discussing her thriller, THE CHILD RIDDLER. Here’s what she had to say:

Yes, my diversity in characters surprised me. I didn’t plan on it, it wasn’t something I set out to do, but as I wrote, my characters began to reflect the diverse world I grew up with in Chicago (the ethnic, racial, sexual orientation, and religious mix). Now I could never do anything else. I want my writing to bring to life the marvelous textures and vividness that makes us who we are. Anything else would be boring to me.

I like action and fast-paced stories, but also ones that are intriguing so you do some thinking. While I like to escape into a story, I like to use my mind (exercise brain power) too. Thrillers provide me this.

My biggest challenge was plot development. I didn’t outline THE CHILD RIDDLER ahead of time, so I had to keep going back through it to fix plot issues. A mistake I won’t make again.

You have such a great plot (a child knowing the riddle to the code to the world’s most lethal weapon) that would be hugely popular in mainstream publishing, so why did you limit yourself by having a gay main character and other diverse characters?

The streets in the publishing capitol, New York City, aren’t just filled with white straight people, are they? Diversity is reality. In THE CHILD RIDDLER, the protagonist is a lesbian, but that’s just who she is, and there is no other statement trying to be made. Diverse characters just want to be included, and I think they should. They are real here on earth. In the diverse world that I grew up in, I was surrounded by an exciting powerful kaleidoscope of people. That’s the planet I want to live on. And do.

I hope my book is a success so I can help mainstream publishing see a gay protagonist as part of the normal landscape. Her lesbianism is just who she is—it’s not the story. THE CHILD RIDDLER is a thriller with an intriguing plot that features awesome and interesting characters.

The biggest opportunity for me was the end result of developing my author brand. In doing so, I discovered that my personal story (a poor, homeless Chicago girl who crashed through the glass ceiling and became a woman leader on the international stage) could help other women realize they are strong and give them hope.

I have been to all of the six countries featured in THE CHILD RIDDLER.

Books saved my life. With my rough childhood, reading books showed me there was another world and shared with me stories of other women’s lives, and I started to believe maybe I had a chance to live differently. I devoured books growing up.

Gertrude Chandler Warner’s The Boxcar Children, about four orphaned siblings taking care of each other after their father dies, had a profound impact on me since it reflected in many ways the abandonment and loss I had as a child. While my mother raised us (alone), I lost my father to mental illness and had to help my mother raise and protect my baby brother. I felt connected to the characters. I realized I wasn’t alone when I read the book.

In Iris Johansen’s suspense novels that featured the skilled CIA operative Catherine Ling, I saw a strong woman character like the one I wanted to write.

Reading Agatha Christie and Margaret Truman’s books, I discovered I had an interest in mystery, crime, suspense–that general intrigue.

Angela Greenman is an internationally recognized communications professional. Her career has spanned the spectrum from community relations in Chicago to US and world governments’ public communications on nuclear power.

She has been an expert and lecturer with the International Atomic Energy Agency (IAEA) for over a decade and developed the communication standards for the IAEA’s Corporate Operational Safety Review Team (OSART) program. Ms. Greenman also participated as a team member for the France and Czech Republic Corporate OSARTs.

The IAEA published two of her papers, Communicating Risk to the Public and Achieving Successful Communication. At the invitation of the IAEA, she spoke at the agency’s prestigious International Conference “Topical Issues at Nuclear Installation Safety: Continuous Improvement of Nuclear Safety in a Changing World” that was held in Beijing, China.

As a spokesperson for the US Nuclear Regulatory Commission (NRC), she advised senior management and staff on media issues, conducted interviews and press conferences, and was actively involved in public meetings. Her guidelines, “Conducting Public Meetings,” were published by the NRC. She was a recipient of multiple awards from the agency.
In Chicago, she served as press officer for the Chicago Human Relations Commission, the City’s civil rights department. In this position, she worked with the department’s six community advisory councils and managed city-wide media campaigns, community meetings, and events.

Ms. Greenman holds a Bachelor of Arts degree in speech communications with honors from Roosevelt University in Chicago. She also received advanced training in the Executive Media Relations program of the Chicago Police Department and studied at the US NRC’s Technical Training Center.

She has traveled the world (21 countries and counting), sailed the turquoise Caribbean waters, and now her imagination is devising plots in the exciting places she has explored for her new chapter as an author.

To learn more about Ms. Greenman and her work, please visit her website.