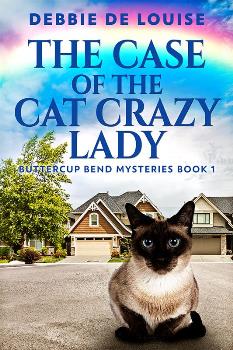 The first book of the proposed Buttercup Bend cozy mystery series features Cathy Carter, who co-owns a pet cemetery and pet rescue center with her brother. Cathy becomes involved in helping to solve the murder of the town’s “Cat Crazy Lady,” Maggie Broom.
While the sheriff suspects one of Maggie’s siblings, Cathy investigates with her reporter friend, Nancy, but do the two come to close to the truth for safety?

Debbie De Lousie recently spent some time with The Big Thrill discussing her latest thriller, THE CASE OF THE CAT CRAZY LADY:

I like creating quirky characters and placing them in a small-town setting. I also enjoy writing mysteries that aren’t too graphic or books that contain explicit sex, although I include some romance in them. I believe cozy readers are looking for books that are clean with good plots and fun characters, ones that may include recipes, pets, and/or unique occupations of main characters. They like mysteries that are a challenge to solve but not too difficult. They want to be surprised but not shocked. 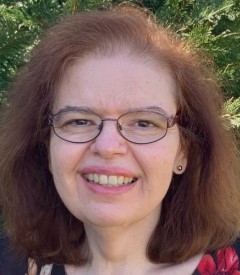 The biggest challenge was trying to find an agent for this book. While I spent years trying to do this as I published other projects with indie publishers, I finally decided to submit it to one of them. I think this was also an opportunity because the fans of my other cozy series have been waiting for me to start a new one.

Debbie De Louise is a reference librarian at a public library. She’s the author of the Cobble Cove cozy mystery series featuring Alicia the librarian and Sneaky the library cat. She’s also published three standalone mysteries, a paranormal romance, a time-travel novel, a romantic comedy novella, and a collection of cat poems. Her stories and poetry appear in over a dozen anthologies, including many of the Red Penguin Collection. Debbie also writes articles for Catster.com. She lives on Long Island with her husband, daughter, and two cats.