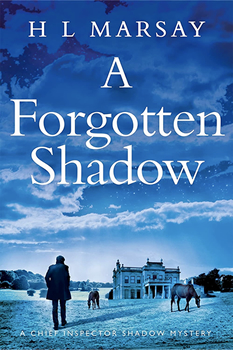 Helen Marsay, writer of quick-paced English detective stories with a touch of humor, prepares for the launch of the fifth book in her Chief Inspector Shadow series. Typically, York is the setting for her writing, but Marsay wanted to delve into the past of her main character, John Shadow, so she set the investigation in Kirkdale—Shadow’s childhood home.

John Shadow is a man of contradictions. A solitary figure who notices the smallest detail about other people but endeavours to avoid their company. A lover of good food but whose fridge is almost always empty. Though he would prefer to work alone, he is assisted by his eager partner, Sergeant Jimmy Chang.

Interestingly, this main character was inspired by Marsay’s father. “I named Shadow John after my dad, and the two of them do share a few traits. Both are plain-speaking Yorkshire men who enjoy a good red wine and love listening to jazz music. Although Dad never got to read my books, I like to think he would have enjoyed following Shadow’s investigations and trying to work out whodunnit,” she shares.

In A Forgotten Shadow, Detective Chief Inspector John Shadow is called to Kirkdale Castle to investigate the death of a handsome racehorse trainer during a shooting party and finds himself being haunted by childhood memories, including his father’s murder. He suspects the two deaths may be linked. Marsay’s engaging mystery is certain to capture the attention of readers with a penchant for police procedurals with mystical, yet eerie, settings.

Marsay visited the city’s racecourse during the Ebor Festival, York’s most famous horse racing event and known as ‘the Ascot of the North.’ It was a great excuse for her to dress up and wear a big hat, while getting research done!

Although part of a series, A Forgotten Shadow can be easily read as a stand-alone book.

When asked about her writing style or methods, Marsay admits, “I wish I was more organised when it comes to research, but I’m forever interrupting my writing to look something up. Most recently, I had to pause mid-sentence to check when the phrase ‘claptrap’ was first used. At the moment, my desk is covered in notes about cyanide poisoning. I promise it is for the book I am currently writing, but my long-suffering husband has taken to sniffing his morning coffee to check for any scent of almonds.”

Though she finds nothing more daunting than facing a blank page or computer screen when it’s time to start, her favorite part of the writing cycle is going back to polish her end result. 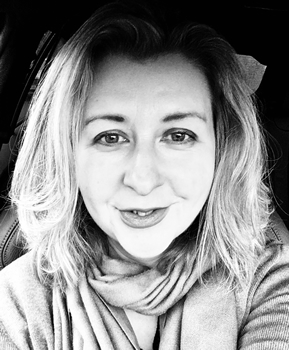 “I can come up with a million things to do to avoid beginning, like defrosting the freezer or cleaning the dogs’ teeth, but once the first draft is done, I love going back and editing my work.”

Influenced by many great and varied female writers, Helen Marsay has been writing since the age of ten. From Yorkshire’s own Brontë sisters, to Jilly Cooper, to Kate Atkinson and of course, the ‘Queen of Crime’ Agatha Christie, all have propelled her to continue writing. However, it can be a trade for sleep sometimes when Marsay gets a good idea. She’s been known to be woken up in the middle of the night by ideas for a plot twist or dialogue between characters—talk about dedication to your craft!

“Whether it’s wandering through the streets of York or tramping across the moors, I find walking to be the best way to get the plot outline clear in my head. Luckily, I have two dogs who are more than happy to venture out with me whatever the weather.”

Along with walking, Marsay enjoys listening to music to get her juices flowing. She prefers to listen to songs that will fit the story or character she’s developing. For instance, Shadow is a jazz fan and loves the big band sound. Therefore, when she’s writing, her playlist will include a lot of Ella Fitzgerald, Frank Sinatra, and Duke Ellington. At the moment, she’s writing a book set during the First World War and was thrilled to find a CD of popular songs from that period. The only downside is now she’s got “It’s a Long Way to Tipperary” stuck in her head!

Like any good author, Marsay hopes her books can resonate with readers but isn’t expecting everyone to be a fan. And that’s okay. She understands it’s impossible to please everyone all the time and says she knows she won’t be every reader’s ‘cup of tea.’ So she continues to write the stories she loves and hopes others can enjoy them, too.

After all, the road to success is paved with many winding roads and obstacles; it takes a determined individual to make it to the other side. When asked about her publishing journey, Marsay comments that it involved a lot of luck and good timing.

“I finished writing A Long Shadow in November 2019 and decided to send the first three chapters to a few UK publishers who were accepting unagented submissions. While I was waiting to hear back from them, I discovered Tule Publishing had launched a new imprint and were actively look for mysteries to publish, so I sent A Long Shadow to them too. Then at 11 p.m. on February 14th, I received an email from their managing editor offering me a contract and asking if I’d like to write a series for them—the best Valentine’s Day gift ever!”

Much has changed since Marsay’s querying days. You no longer submit cover letter, synopsis, first three chapters and a stamped, self-addressed envelope in the mail.

Helen Marsay states, “It was so miserable seeing those brown A4 envelopes landing back on my doormat a few months later! I gave up writing completely for about ten years, and when I came back, everything had changed. Submissions could be emailed, books could be digital as well as print and lots of lovely independent publishers had popped up in places other than London and New York.”

It just goes to show if you follow your dream, and it’s meant to be, it will happen for you. While Marsay’s family is extremely proud of her, she does have teenage sons who find anything she does completely embarrassing. However, the boys and her husband always take Marsay out for dinner to celebrate the release of a new book (“on the strict understanding that no photographs I take of us all will appear on social media, of course”).

Marsay’s new series is set in London during the First World War, when women were eventually allowed to join the police. The first book should be out at the end of 2023 or early 2024. Tule Publishing always organizes a virtual launch event at the Tule Book Club, where Marsay has the opportunity to discuss her latest book and chat with readers.

“I am also lucky enough to live in North Yorkshire, where there are lots of great independent bookshops. No doubt I’ll be popping in to sign some copies of A Forgotten Shadow over the next few weeks.”

What would Helen Marsay be doing if she hadn’t become a writer?

She says, “I would love to be a singer or a musician, but unfortunately, I’m completely tone deaf. I am also completely in awe of songwriters. It seems incredible that they can tell a story in three minutes when it would take me three hundred pages.”

We hear you on that one, Helen!

H.L. Marsay grew up binge reading Agatha Christie novels and promised herself that someday, she would write a mystery of her own. Fortunately, living in York, a city full of dark corners and hidden snickleways, she was never short of inspiration, and the Chief Inspector Shadow series was born. When she isn’t coming up with new ways to bump people off, she enjoys red wine, dark chocolate, and blue cheese—not necessarily together! On the rare occasions when it isn’t raining in North Yorkshire, she can be found tramping across the windswept moors with the five men in her life—two sons, two dogs, and just the one husband!