Features, Latest Books, Up Close
2 months ago
by Jaden Terrell
0 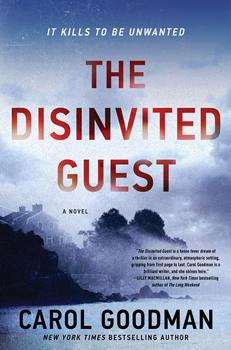 When bestselling author Carol Goodman was nine years old, she was given a creative writing assignment at school. She turned in a 90-page collection of stories (crayon-illustrated, of course) about the adventures of a girl named Carol who lived with a herd of magical horses. “I knew from that moment I wanted to be a writer,” she says, “and that I’d always find a way to rewrite my own life.”

She won a poetry award in her teens, then majored in Latin at Vassar College. Her first published novel, a critically acclaimed literary mystery called The Lake of Dead Languages, was also her first bestseller. It was followed by The Seduction of Water and four more literary mysteries. After a short detour writing fantasy and young adult fiction, she returned to her roots, writing gothic suspense. To date, she’s written 24 novels, been translated into 16 languages, and won several major awards.

Asked to name a book that changed her life, Goodman says, “Jane Eyre gave me a lifelong love of the gothic and the belief that the story of a woman’s journey through life is a worthy topic to write about.”

That gothic flavor infuses her latest book, THE DISINVITED GUEST. It takes place ten years after the 2020 pandemic, and a new virus is running rampant. Protagonist Lucy Harper, still traumatized from the last pandemic, retreats with her husband, Reed, and a group of in-laws and friends to Reed’s family estate on an island off the coast of Maine.

“The island is beautiful,” Goodman says, “but haunted by its history as a 19th century quarantine island and also by the events of the summer of 2020 when Reed’s family sheltered there. Rivalries and resentments stemming from that summer create tensions between the inhabitants of the island and drive one of the party to begin exacting revenge.”

The inspiration for the book came in March of 2020, at the beginning of the COVID-19 lockdown. “I was teaching at SUNY New Paltz at the time,” Goodman says, “and one of the hardest things for me was seeing the impact the pandemic was having on my students. I found myself thinking about how this event would affect their lives in the future, especially for my students who didn’t have as many resources and advantages. I couldn’t help but see how the pandemic impacted people unequally, how some people were able to shelter quite comfortably and safely while others had to struggle for the most basic needs.”

The inspiration for the setting came from a writing retreat she attended in the summer of 2019 on Norton Island. “I found myself longing for that beautiful and peaceful place, but also wondering what it would be like to be that far away from everything during a pandemic,” she says. “I’ve always been interested in the question of safety and shelter—what we do to protect ourselves and our loved ones and how that urge might ultimately lead us into danger.”

Goodman’s decision to write about a future pandemic rather than the current one came from an understanding of the trauma she and her readers were going through. She needed to write about the pandemic, but from a safer, perhaps more objective, distance.

“I wanted to find a way to remove my book from the everyday reality of the current pandemic, both because I needed to get away from it, and also because I suspected my readers would want to, even a few years later,” she says.

Although THE DISINVITED GUEST is set a decade in the future, it has a timeless feel, rather than a futuristic one.

“The island setting gave me a way to remove the action of the book from my everyday world and to make the story seem more timeless and elemental. Like many people, I’d found myself reading about past pandemics—the Spanish flu, the plague, and finally, the fever ships that carried immigrants from Ireland during the potato famine,” she says. “I thought by including that older history on the island I could both shed perspective on the current pandemic and also introduce an otherworldly feeling. I wanted to get across that feeling that the past is still going on around us in how its shaped us. I think the core of the Gothic is to feel haunted by the past and trapped in some way so I think that’s why the book has that feeling.”

Asked what she hopes her readers will take away from this book, Goodman says, “First and foremost, I want my readers to be entertained and taken out of themselves for a little while to give them a rest from whatever’s hard about their lives. That’s what I look to books for—a reprieve from my own worries and anxieties. Then if they can come back to their lives with a little sense of hope or knowledge that helps them get through the next hard thing … well, then my work is done. In this book, I hope my readers see that we all went through a lot over the last couple of years, and many of us are still reeling from what we’ve been through. I hope my readers come out of this book feeling patience and compassion for themselves and for others.”

In THE DISINVITED GUEST, Goodman creates a constant sense of tension, uncertainty, and ever-shifting suspicions in the reader. Her characters are complex. Deeply flawed, yet mostly likable, they feel like people one might actually meet. All are plausible suspects.

“I believe we are all complex,” Goodman says, “and we all have the capability to be good and not-so-good. I especially focused on envy and jealousy here and how those emotions, which I think were heightened during the pandemic when we were seeing into each other’s living rooms, can be corrosive and damaging. They can make us do bad things to each other but they can also help us to understand each other.”

There is also some uncertainty about whether there are supernatural elements at work. To Goodman, this represents all the forces in the world we don’t understand. “Watching a storm cloud out at sea—just standing on the edge of the sea and watching its power—evokes a sense of mystery in me,” she says. “The past also evokes this feeling in me. When I think about ‘hauntings,’ I think not just about literal ghosts, but really about how the past shapes all of us. “We are all haunted in some sense by what’s happened before us, in our personal stories, our family legacies, and the historical forces in the world around us. I wanted the reader to have that sense of mysterious forces in the background—whether you believe they are supernatural or natural. I leave it to the reader to decide how much those forces play a part in what happens.”

Naturally, Goodman has another project in the works. “It’s a psychological suspense set on a college campus,” she says, “where a group of classmates who were in the same college writing class meet over the winter break. Memories of a crime committed during their senior year come back to haunt the group as they find themselves snowbound on the campus. One by one, they begin to die in manners reminiscent of their college ghost stories.”