Identity, Family, and How Childhood Shapes Us 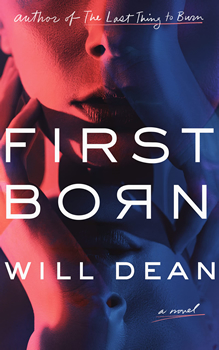 Molly Raven is half a person.

Her other half, her identical twin KT, is everything Molly isn’t. KT is fun, carefree, fearless, and certainly wouldn’t spend hours of every day researching the fatality rate of common household products in order to avoid being accidentally smothered to death when sleeping facedown on a pillow.

Despite their extreme differences of personality, Molly and KT are close. The kind of close that only twinship can bring. They are best friends, lifelong companions, each other’s sounding boards, and secret-keeper. Molly knows that they’ll be together forever, will age together, will die together, will be buried together.

When KT leaves London to go to Columbia University in Manhattan, Molly is devastated and feeling the deepest sort of betrayal. But she soothes herself with the knowledge that her twin will return after graduation and, when she does, the plan of being together forever will go right back into motion. They’ll move to the South of England when they both retire from whatever jobs they have and be old biddies together until they die together in their sleep. As it should be. 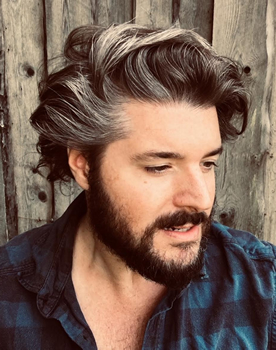 But when KT is found dead in her New York City apartment, Molly’s plan is shattered.

Fighting against all her fears, Molly boards the next plane to New York to meet her mum and dad—who happened to have been visiting KT that week. Once she arrives, her parents tell her that KT’s death… might not have been an accident.

Worried that the overworked NYPD won’t be able to find her sister’s killer, Molly dives into her sister’s life and uncovers more than she ever expected. How many secrets was KT keeping from her, and did one of those secrets result in her murder?

In this exclusive interview with The Big Thrill, Will Dean talks with us about research, survival skills, and how childhood can shape a person’s identity.

FIRST BORN is the second novel you’ve released in America. Have you found anything significantly different between publishing in Europe and publishing in the US?

Not really. I’m lucky—my publishing teams in the UK and US are both extraordinary. In terms of reviewers and booksellers and librarians, I’m always delighted by the enthusiasm of American readers (whether that’s their hatred of Lenn in The Last Thing to Burn or their reaction to the twists in FIRST BORN). I tour a lot in the UK, and I haven’t been able to do that in the US yet due to COVID-19. I am very much looking forward to meeting American readers in person. 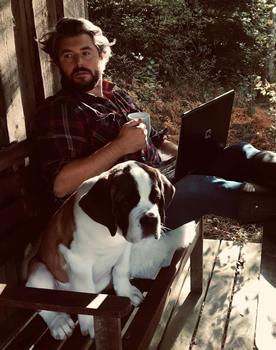 Dean works on a manuscript outside his writing shack with his dog Bernie.

Both FIRST BORN and The Last Thing to Burn were written from the perspective of a woman. Is there something you find preferable to writing women, or was it more that the character needed to be female for the stories to work?

I start with a simple visual that I can’t get out of my head. With The Last Thing to Burn, I “saw” an isolated farm cottage and a figure walking in and out (but she never walked far away), and I came to understand she was being held captive. With FIRST BORN, I saw a young woman in London receiving a call from her parents explaining that her identical twin in New York had been found murdered. My reaction to that visual was immediate. I imagined how Molly must feel, her urgent need to travel across the Atlantic to discover the truth.

Your knowledge of New York City was spot on—was that due to personal familiarity or intense research? And, again, with Molly Raven’s deep knowledge of survival skills and fatality rates—was that the result of your own experience or of going down the Internet rabbit hole?

Thank you. Both. I traveled to New York twice in a matter of months to do research. I wanted to “walk the book,” cover all the streets, diners, and landmarks. I needed to take in the smells and the little details. Also: as a Brit, I’ve been enamored by all things American (and New York) since I was a small boy in the rural Midlands. The States always felt familiar yet exciting.

Regarding survival skills, I am naturally interested in the subject. That’s mainly because I live off-grid in the Swedish wilderness with my wife and son. We have to be quite self-reliant because it’s doubtful any fire trucks or police cars will find us in time (or at all) in an emergency. I didn’t have such an interest when I lived in a small apartment in London! Here we have moose, wolves, snakes, etc., and I work hard to ensure I can fix my truck and have access to clean water, food, power, medical supplies, and wood (for heating and cooking). I’m a stickler for fire safety (we built our wooden house in a forest clearing), but I hope I’m more relaxed than Molly Raven. 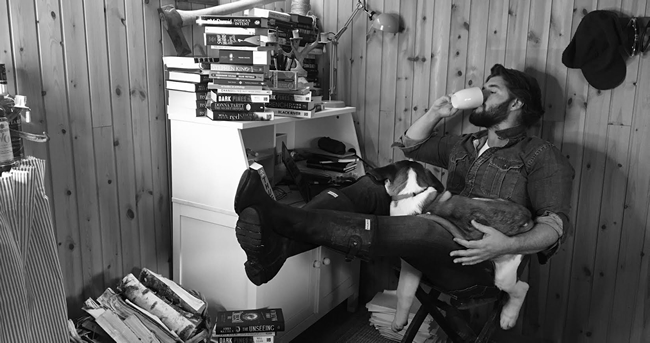 Dean sits at his writing desk, with a young Bernie offering support.

I’m fascinated by identity, family, and how our childhoods shape who we become. Those themes run through all my stories. In this case, I think I was partly inspired by a family I met once at a barbecue. They had two daughters: one outgoing and fun, the other far more serious and shy. That’s not so uncommon, but on the drive home to the forest, I was thinking about how they’ve already been labeled as “the fun one” and “the serious one.” Now imagine that dynamic with identical twins. I imagined Molly Raven (our protagonist, “the serious one”) might grow up to resent being pigeon-holed. Likewise, Katie Raven (“the fun one”) might think to herself “actually, I can be serious, I can be complicated.” The potential for resentment fascinated me.

I’m also drawn to twisty books. I’m a fan of Patricia Highsmith, Dennis Lehane, and Gillian Flynn. I don’t think twists should be overdone. Many of my favorite novels don’t contain a single one. But sometimes, a seismic twist can be a beautiful thing.

This story’s plot is incredibly intricate. Did you have it meticulously planned out in advance or let things unfold naturally? 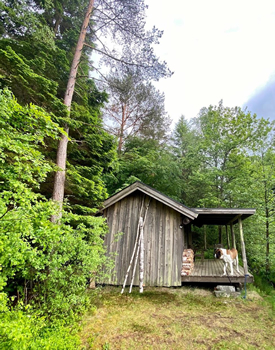 Both. I don’t plan on paper. I never write things down. But inside my head I visualize, over and over again, the key scenes before I begin a first draft. If I write notes, I worry I’ll hold on to ideas that don’t deserve to stay (Stephen King taught me this in On Writing). I prefer a degree of fluidity. I’ll know the main beats of the story before I start writing, but more importantly, I’ll understand the mood, the atmosphere, the tone. I’ll know the voice of my main character. I’ll be familiar with the place and the time of year.

Once I’m ready to begin writing, I’ve already built up a lot of pent-up steam and momentum. I wrote FIRST BORN in four weeks.

I “saw” the ending in broad strokes. But the twist didn’t present itself to me until the last minute. I was driving through the forest, visualizing the next scenes, and it struck me. I never saw it coming. That’s an exciting sensation I don’t feel very often.

Can I disclose the other ending? No! 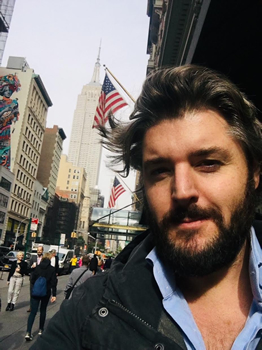 Dean in New York City, where he traveled to do research for FIRST BORN

“Raven” is an unusual last name, at least in the States. Was there a particular reason or symbolism in choosing this name?

I think character names are hugely important. I can’t “see” a character, or understand them, or start writing them, until I have their name. I take a lot of time over this. Raven felt right. Two birds sharing a nest. Two identical chicks growing up, raised by their Raven parents. Both flew the nest, one to London, the other to New York. They’re dark. The collective noun for ravens is a “treachery” or an “unkindness” or a “conspiracy.” I mean, please.

What comes next for you? Are you working on anything exciting you can tell us about?

I’m writing a new standalone novel. It’s a thriller about family, shame, trust, and survival. Imagine the isolation of The Shining blended with the manipulation of Escape Room.  A twisty high-concept story rooted in the psychology of one woman. Hopefully I can tell you more soon!