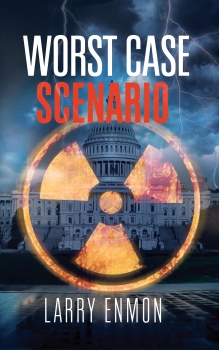 Troy Bishop, assigned to DoD’s Proactive Preemptive Operations Group (P2OG), is dispatched to New Mexico. He discovers the warhead theft is just the tip of a massive plan to take control of the government by an extremist group.

There’s only one chance to stop it before a nuclear explosion destroys Washington, DC.

Definitely the plot. While I worked in the Joint Terrorism Task Force, this was a serious concern. Especially after 911.

I enjoy thrillers because they have the feel of life. Having been in law enforcement and national security my whole career, thrillers take the reader on as close a ride on “the wild side” as most want.

The book is true to life, and the procedures and protocols mirror what the government response to such an event would be.

Larry Enmon retired from the US Secret Service and started writing. During his career, he acted as liaison between the USSS and FBI, working in the Joint Terrorism Task Force. He received training from the CIA in the investigation and production of weapons of mass destruction.

WORST CASE SCENARIO is his second political thriller. He is also the author of Class III Threat, The Burial Place, and City of Fear.

He spends his spare time at his rural East Texas ranch and mountain cabin in North Carolina.