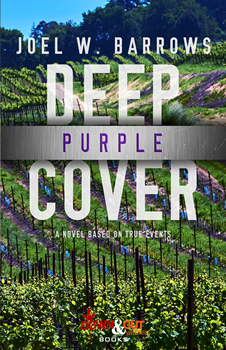 Things in Napa Valley are not as they seem. Everyone wants to get into the wine business, but at what cost? When the co-owner of Pavesi Vineyards goes missing, there are few clues to his disappearance. When his remains unexpectedly turn up, dark forces loom large. FBI Special Agent Rowan Parks is assigned to the case and quickly realizes that the Bureau needs someone on the inside. There is only one person to call: her former lover and ATF’s greatest undercover operative, David Ward.

There was a great deal of research, particularly as to the wine industry and wine making. It was time-consuming, but always interesting. I had intended to go to Napa Valley as part of that research (at least that was part of my justification), but the pandemic got in the way. The biggest opportunity? I would have to say that is always to entertain. But as we see with many successful thrillers, they teach as they entertain. I hope this book conveys the significance of the potential threat to our domestic food supply and its safety.

While the book is part of series involving ATF undercover operative David Ward, in this case, plot and setting came first. The story stems from longstanding problems in the food industry in Italy. I imagined what would happen if this were transplanted to the United States, particularly Napa Valley and the California wine industry.

I have enjoyed thrillers, mysteries, and police procedurals as long as I can remember. I am also a news junkie. Anything that combines all of those must be a good thing.

Certainly, the potential threat to our domestic food supply and its safety, but even more so the degree to which these issues plague almost every aspect of the Italian food and beverage industries, from field to market.

Elmore Leonard. The dialogue in his books is unsurpassed. I particularly enjoyed the way he got inside the head of his criminal protagonists.

Michael Connolly. I think he is the master of crime fiction right now. As a former prosecutor, I am amazed at the realism of his portrayal of the world of law enforcement and defense lawyers. He really has his finger on the pulse.

John LeCarré. His description of spy craft, and the geopolitical forces that impact it, have always fascinated me.

Frederick Forsyth. What can I say? He wrote The Day of the Jackal.

How real is the threat you describe?

All too real. Most of the issues I deal with involve the growing problem of domestic terrorism, something I have been writing about for many years.

Joel Barrows is an Iowa district court judge who regularly oversees both criminal and civil trials. Prior to his appointment to the bench, he was a practicing attorney for nearly twenty-three years; the last eighteen of those spent as a state, and then federal, prosecutor.

As an attorney, Joel regularly argued before the United States Court of Appeals. His cases have been as diverse as white-collar crime, environmental crime, cyber-crime, child exploitation, narcotics and firearms offenses, immigration crimes, bank robbery, health care fraud, public corruption, civil rights offenses and threats against the President, and have included many high-profile prosecutions.

He holds a bachelors and masters degree in history, a law degree from Drake University Law School, and a Master of Laws in International and Comparative Law with distinction from Georgetown University Law Center.

He has traveled extensively in Central America. He lives with his family in eastern Iowa along the banks of the Mississippi.