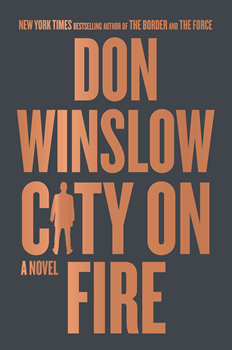 Don Winslow’s highly-anticipated CITY ON FIRE hadn’t even hit shelves when he shocked the world with an announcement: After decades in the publishing industry and multiple seven-figure Hollywood deals, Winslow has decided to quit writing and dedicate his time and resources to another of his passions—politics.

If you’ve followed Winslow on social media over the past couple of years, the announcement won’t completely surprise you—the New York Times bestselling author of 22 novels has taken a very public, no-holds barred stance on former President Donald Trump, his allies, and his constituents.

“I want to continue on speaking out where I see what I think is wrong,” he said in a recent press release. “It’s a big deal. It’s not a decision I made easily. Democrats have better ideas, better candidates, and a better vision for tomorrow. What they don’t have is better messaging, and I’m going to try and change that.”

Important enough that Winslow says he won’t be accepting donations for his crusade—he plans to fund the entire campaign himself. 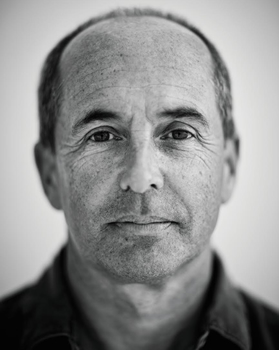 It’s a massive shift for an author who may be considered the greatest crime writer of all time, and while the political work is well underway—Winslow has produced a number of videos that went viral and included collaborations with the likes of rock legend Bruce Springsteen and acclaimed actor Jeff Daniels—the announcement shouldn’t overshadow the fact that Winslow has just released the first book in a gripping new trilogy that will only solidify his place in the genre—and make us miss him more.

Set in Rhode Island, CITY OF FIRE introduces readers to two new criminal empires—the Irish and the Italians, who have, for the most part, managed to keep to themselves. But when a beautiful woman comes between them, it launches a war that will see them kill each other, destroy an alliance, and set a city on fire.

This, like all of Winslow’s books, is an epic new crime story—but as he notes in this Between the Lines interview for The Big Thrill, its origin may come as a bit of a surprise.

Although already a fan of your novels, you hooked me when I read that CITY OF FIRE—and the trilogy—is based on The Iliad. I’d love to hear more about how that classic inspired this story.

I was reading The Iliad, and the incident that touched off the Trojan War—the “stealing” of Helen of Troy—reminded me of a something that had really happened in the crime world when I was growing up.  So I wondered if I could find other parallels—and did. I had the idea to write a trilogy that could be stand-alone contemporary crime novels while echoing those ancient themes. 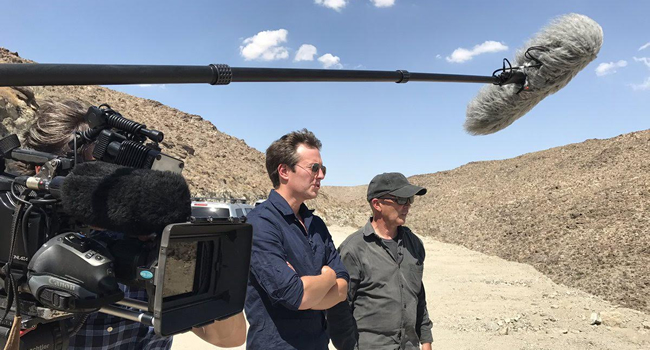 Why do you think classics such as The Iliad still resonate?

Because they deal with universal human themes: love, hate, honor, betrayal, revenge, mercy….and especially fate. The classics portray people struggling with the vicissitudes of life, and we can all relate to that.

Your most famous books—such as the brilliant “Cartel” trilogy—took place in California, but CITY OF FIRE takes place in your former turf of Rhode Island, which seems a ripe setting. Why did it take so long for you to set a book here?

It’s where I grew up and left when I was 17. I think I needed the time and distance to be able to see the place with more mature eyes, to see it objectively to the point where I could write about it. I started to go back to help take care of my mother, and I fell in love with it again. 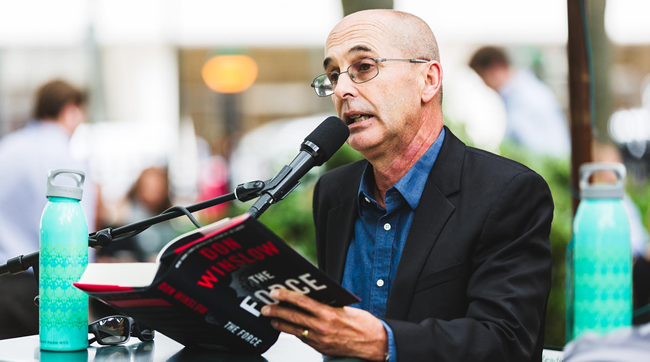 You clearly know the area well, and though I’ve never been, I got a real sense of the vibe there. What aspects—aside from the crime itself—did you feel important to convey for readers and why?

A sense of its beauty, its soulfulness, its history, its people. I want the readers to feel absorbed in the area, to make it real for them.

CITY OF FIRE is set in the 1980s, but I would be reluctant to call this a historical novel—it’s as though you have created your own version of that time period. What prompted you to set the novel in the ’80s?

It was an era when organized crime went into a steep decline, and I think that’s interesting—people fight more viciously because there’s less to fight over. Also, I knew where I was headed with the next two books, and I wanted them to take place at certain times, so the ’80s were right for the first volume. 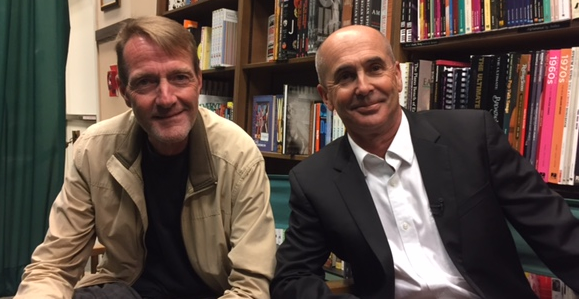 CITY ON FIRE introduces readers to a new organized crime rival—the Irish vs the Italians. Given your vast knowledge of cartels, drugs, and crime, was further research required—and if so, was there anything in your research that surprised you?

Unlike the cartel books, I didn’t need to a lot of research because I had grown up around these people, so I was really consulting memory.  Going to the settings was a matter of walking out the door. Sorry, there were no surprises, because this stuff was so familiar.

Tell me a bit about Danny Ryan—how did he come to be?

I wanted a protagonist who was a little bit of an outsider, so that he could be in the action but also comment on it. I wanted a basically decent human being who does indecent things from well-intentioned motives such as his intense sense of loyalty. Danny isn’t based on a specific person, but I feel like I’ve known him my whole life. 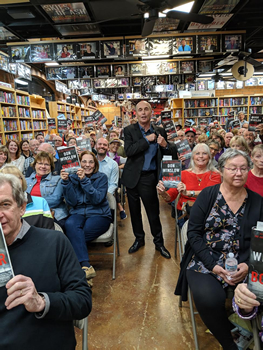 Winslow makes an appearance at the Poisoned Pen in February 2019.

You’re certainly not a stranger to your work hitting the big (and small) screen—I loved the movie Savages. CITY OF FIRE is clearly primed for TV or a blockbuster movie. You write with such cinematic flair—is your writing inspired by TV / film? I understand Sony has the film rights for this trilogy. I know it’s new, but is there anything you can share about that?

Yes, Sony has bought the whole trilogy to make films of them, which, of course, is really exciting. Listen, I don’t think anyone of my generation can say that we haven’t been influenced by screen and TV—we grew up watching it—and certainly I know that I’m writing in a tradition that includes The Godfather, Casino, Goodfellas, and The Sopranos. But I had to nod to those iconic works and then forget them and write my own book. I never think about a potential film when I’m writing.  Only bad things could happen—I’d write a bad film treatment or a lousy novel.

I don’t think I’m speaking out of turn to suggest that you are one of the best writers in the genre—what draws you to crime fiction? Who inspires you?

Well, thank you. I love crime fiction because it allows us to portray human beings in extremis. We see them at their best and at their worst. It also lets us examine—if we choose to—large social issues such as the war on drugs, immigration, addiction, and corruption on a personal level through the characters. We can get beneath the headlines.

I noted above that CITY OF FIRE has a real cinematic feel, and a lot of that comes from your incredibly written action scenes, of which there are many. The Big Thrill is as much for aspiring writers as it is for readers—what advice would you give on how to write such authentic action?

This is going to sound pedantic, but action sequences are all about the verbs. The verbs are the action, after all. So make sure the verbs are vivid. And accurate. I usually try to go to the scenes and walk them through to make sure what I’m writing is possible and accurate.

In a similar vein, your books include violence, but it doesn’t feel gratuitous. How do you balance that for authenticity?

It’s tough. I don’t want to cross the line into the pornography of violence. At the same time, I don’t want to make it look pretty. I think it’s a matter of showing the consequences—the pain, the grief, the guilt.

CITY OF FIRE is the first in a trilogy—what can you tell us about the next installment?