Features, Latest Books, Up Close
1 month ago
by R.G. Belsky
0 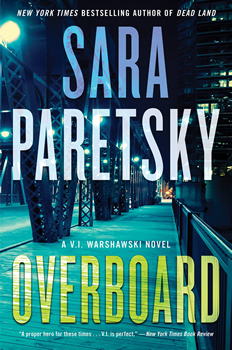 Bestselling author Sara Paretsky says writing during the pandemic has been difficult for her—but the result is an exciting new V.I. Warshawski thriller called OVERBOARD, in which her iconic female PI battles crime and COVID to solve the mystery of an unidentified young girl she finds near death.

V.I.’s efforts to help the girl send her head-first into a collision with Chicago’s most powerful and connected property dealers that soon puts her own life at risk too.

It’s the 21st book in the legendary V.I. Warshawski series and marks the 40th anniversary of the first time we met V.I. back in 1982 in Indemnity Only.

“I wrote this book during the first year of the pandemic,” Paretsky says in an author’s note for OVERBOARD. “Some of my writing friends found the isolation a time that focused their creativity in new ways. Others found themselves unable to summon ideas or creative wit. I unfortunately fell into the second category.”

“OVERBOARD was my COVID book,” Paretsky tells The Big Thrill. “I struggled, as everyone did, especially those who, like me, live alone. There’s something about the pandemic that made it hard to focus…and that was true for OVERBOARD. I wrote and discarded many times until I got to the core story that is in the final version.

“One of the biggest helps I got with this came from an ad hoc singing group that formed on my block. Many of us hadn’t met before, but every night at 7 p.m. we would come out and sing. There were so many of us that even though we were keeping a social distance, the song carried up and down the street and gave us a much-needed community. We even sang in January when it was six degrees outside.”

Unlike many other authors who ignore the pandemic in their fiction, Paretsky tackles it head on in OVERBOARD. V.I. has to solve the mystery in the book while at the same time dealing with masks, vaccines, and all the rest of the real-life things we’ve faced over the past two years.

Was it a difficult decision for Paretsky to include COVID issues in V.I. Warshawski’s fictional world?

“It’s always tricky when there’s an urgent crisis about how much to include in the novel,” she says. “Crises come and go, and by publication date you may have written something that’s become obsolete. However, by the time I was finishing what became the final draft, it was clear that COVID was to become part of our lives for some time to come, and I felt that the characters needed to respond to it. It’s not a major theme of the book, but it’s part of the context in the same way that rush hour traffic on the expressways is part of the context.”

Like many of the V.I. Warshawski books, OVERBOARD contains many references to other real-life current events and political issues.

“The book started with the arrest by Dept. of Justice prosecutors of hospital executives making big fortunes on the back of opioid crisis,” Paretsky says. “That was my original crime idea, but I couldn’t pull the story together around it, and so I moved on to for-profit nursing homes.”

There is also a lot of emphasis on police issues, including one abusive cop in the book who works out of a controversial law enforcement spot called Homan Square. “I don’t make deliberate decisions to include current events in my book. Rather, the events in the news often shape the way a story moves. Chicago has a long and troubling history of police abuse of suspects, and the Homan Square location has a notorious reputation.”

How much has V.I. changed since the first book in 1982? “Because V.I. comes out of my own thoughts and feelings, I’m not aware of her having changed over the years,” Paretsky says. “Although perhaps I have without noticing it, and so perhaps she has as well.”

Because the V.I. Warshawski books have been around so long, Paretsky also is asked frequently about the issue of V.I. getting older, as well as the characters in V.I.’s fictional world.

“We all are dealing with a lot of loss these days, and we turn to our fictional characters for comfort. I know it’s not realistic that Lotty Herschel is still in the operating theater, but I’m not ready to deal with the pain and grief of losing her or Mr. Contreras or the dogs, let alone V.I. herself.”

So how much of the real-life Sara Paretsky is in her V.I. Warshawski character? Are they alike at all? “V.I. is a bolder, public presence than I could ever be,” she says. “We think the same thoughts much of the time, but she’s much more likely to put those thoughts into reckless action than I am.”

Back in the ’80s, Paretsky—along with other prominent female authors like Sue Grafton—was very active in getting strong female characters to be recognized in the then male-dominated field of mystery fiction authors.

“We’ve seen a major and welcome sea change in women as both writers and characters in thrillers and mysteries,” she says now. “Sue and I, along with Marcia Mueller, Linda Barnes, and Eleanor Taylor Bland, had to forge a path for strong female characters. They were greeted with open arms by some readers and with suspicion and hostility by others, but now are a well-accepted part of the landscape. The change we’re now watching unfold has to do with characters that may be LGBTQ identified as well as characters of non-European ethnicity. I feel certain that readers will embrace these new voices just as they embraced us.”

Paretsky writes other things besides V.I. Warshawski but admittedly keeps coming back to her as her primary character.

“I’ve written two novels that don’t feature her, Ghost Country and Bleeding Kansas. In my 2020 collection, Love & Other Crimes, there are quite a few short stories that don’t include V.I. However, the issues of voice—who gets to speak, who gets to be heard—continue to dominate my own mind, and those issues are best addressed through V.I. For that reason, I can’t imagine that I will ever stop writing books in that series.”

Of course, we all remember Kathleen Turner’s portrayal of V.I. Warshawski on screen a long time ago, and V.I. could be coming to TV now. “F/X actually has an option on the character,” Paretsky says, “and I’d love to see them turn her into a series on the small screen.”

So what’s next for Paretsky? “I’m working on another book in the V.I. series, whose backstory has roots in Kansas in the decades around the Civil War. That’s a history that I can’t stay away from.”

The May 2022 Edition of The Big Thrill is Here!

Excerpt: The Darkness in the Light by Daniel Kalla