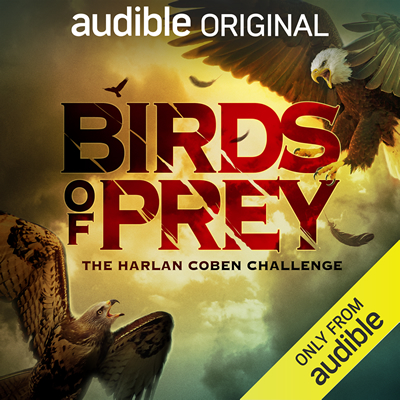 It all started with a challenge from New York Times bestselling author Harlan Coben: pick a bird of prey, then use it as the inspiration for a brand-new story.

Eleven acclaimed and award-winning thriller writers rose to the challenge, resulting in BIRDS OF PREY, an Audible Original anthology set to launch this coming October.

“I think Harlan had a twinkle in his eye for sure as he set out this challenge,” says Steve Feldberg, executive producer of the project for Audible Originals. “It’s almost like he dropped all of the writers into an aviary, and they had to scramble around to pick their favorite bird of prey before someone else got it. And I imagine that, for some of the writers, there was a momentary bit of buyer’s remorse: Okay, I’ve got this bird, now what do I do with it?”

The authors—chosen by the International Thriller Writers (ITW)—clearly figured things out. An egg worth its weight in gold. A mysterious operative known only as Owl. An eagle watcher who sees more than he should. Even a story that places the Maltese Falcon in a nursing home. These are just some of the imaginative stories that evolved.

“The beauty of the project is that everyone rose to the challenge, and then some,” says Feldberg. “No story is like any of the others, and the central characters are each unique in and of themselves, and how each bird is utilized is entirely organic.”

“I was really impressed how each author approached the challenge, and I think the variety and creativity in these stories will open a window on the creative process,” says C.J. Box, anthology editor. “We gave the writers lots of leeway when it came to a story about a bird of prey, and the authors took full advantage of that to very good results.”

The anthology kicks off with a cheeky intro from Coben:

“Let me just start off by saying that this short-story collection is truly owl-some. Some of these bird stories might fly over your head, but if you love reading compelling crime fiction, toucan understand how egg-cited I am to be editing this collection.

“Then again, hoo cares what I think?

“I know, I know. None of these puns are emu-sing. Egrets? I have a few, but then again, too few to mention.

“Whoa, this is getting hawkward.

“Did I get you to skip this intro yet? Or do you at least want to tell me to duck off?

“Okay, enough. Puns like this should be ill-eagle. Dad Joke Mode is over. Let’s get to it.”

And get to it they do. The collections features heart pounding stories from these bestselling and award-winning authors:

“I wanted to write a different type of short story, a harrowing tale of a stalker… who can fit in your pocket,” says Gregg Hurwitz, who contributed to the anthology with “Red of Beak and Claw. “In fact most of us already have that stalker in our pocket right now.”
Ominous indeed!

“What I love about anthologies is an opportunity to discover new writers, appreciate favorite writers, and enjoy a wide range of writing styles and storytelling,” Feldberg says. “But when you add in the performative aspect of narration, it adds an entirely new layer to the experience.”

The goal, aside from meeting—and exceeding—Coben’s challenge and providing listeners with a truly unique story collection is to help the featured authors gain new readership. That, along with the idea itself, was one of the main reasons Audible was quick to jump on board the project.

“It’s such a high-wire act to take a single prompt—a bird of prey—and spin that out into a thrilling story,” Feldberg says. “Does the plot revolve around an actual bird? Is it a nickname for a character? Is it a bird-like object? Figuring that out is only the start, because the writers then need to develop a character and a story in which that bird not only makes sense, but also drives the plot. The great thing for me was being able to have a front-row seat for that creative process.”

Feldberg says the anthology also provided an opportunity for Audible to build on its relationship  with ITW, which dates back to 2007 with The Chopin Manuscript, which went on to win the Audie Award for Audiobook of the Year and led to the sequel, The Copper Bracelet.

Audible’s admiration for the organization and its members is clear.

“What’s so impressive about ITW is the loyalty its membership has to the organization,” Feldberg says. “Each writer in BIRDS OF PREY is incredibly busy and highly successful, yet each was willing to devote the time, creativity, and brain power to a complicated challenge. And they did it all with great energy and good cheer.”

BIRDS OF PREY swoops into your earbuds this fall but is available for pre-order now.

On the Cover: David Baldacci

The April 2022 Edition of The Big Thrill