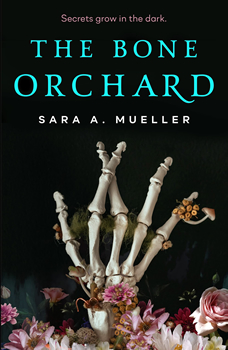 “Writing THE BONE ORCHARD was a little like being possessed,” says author Sara A. Mueller of the novel she crafted over the course of ten tumultuous years. “No matter how my life was going, THE BONE ORCHARD world was worse. It made me so angry on behalf of almost every character in it that I simply couldn’t get away from it. I used to joke that I had to finish it, because if I didn’t it would haunt me to death in a kind of perfect Gothic symmetry.”

Whether or not THE BONE ORCHARD would have haunted Mueller’s life had she not completed it is uncertain, but it certainly haunts the reader from start to finish—and continues to do so days after you’ve turned the last page.

Allow me to convince you to join me in this lush gothic fantasy.

Mistress Charm runs Orchard House, a high-end brothel. While she sees to the king’s desires, the male elite of Borenguard are served by her boneghosts—women grown from bones ripened on a special tree behind Orchard House—women with Mistress Charm’s face. 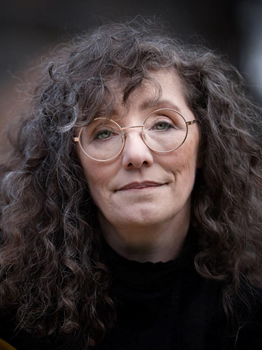 The boneghosts know, just as Mistress Charm does, what they truly are—pieces of The Lady’s emotions, excised and put into flesh so The Lady does not have to experience them. The Lady, they all know, is too fragile after The Incident to allow them to stay within her.

Pain hurts too much. Desire wants too much. Justice cries for action. Pride has been discarded. And Mistress Charm—the one who oversees them all and keeps The Lady safe within her—is the most hated of all, for she enjoys her work at Orchard House.

The boneghosts’ names and personalities were not lightly come upon; it took Mueller much thought to arrive at her final five boneghosts. “I looked at which of her experiences might inspire traumatic dissociation,” she says, “and then ended up reducing some more as I explored how many I could practically handle and which were needed to tell the story. I assigned the names that seemed to fit but used a version that was easy for the customers of Orchard House to digest and, in some cases, misunderstand.”

See, the story of THE BONE ORCHARD is not just one of a mystery to be solved—more on that soon—but a story of exploring and reconciling deep trauma. Fortunately for us, Mueller did an excellent job of carefully unfolding layers of trauma as the book progressed and used the lives of the boneghosts to thoughtfully interpret how trauma would take shape and be addressed within a dark fantasy world. 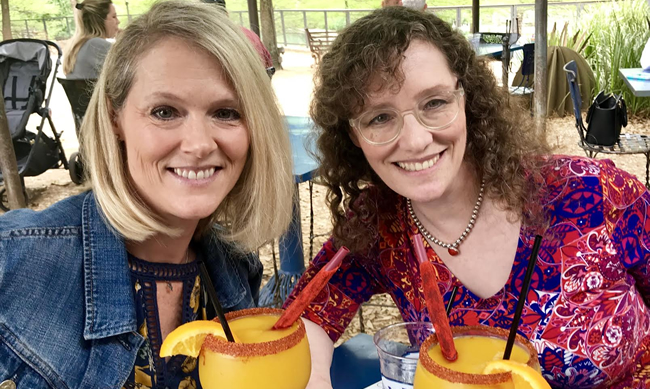 Mueller and her sister in San Antonio, on their way to see Fiddler on the Roof

“The main character of THE BONE ORCHARD is a trauma survivor,” Mueller says. “It’s what she was from the outset. I felt I had to try to look even the fantastical elements of it in the face to the best of my ability. Not making the attempt would have felt like a betrayal of the story and deeply disrespectful of actual trauma survivors.”

The heavy leitmotif of the book does not overshadow, overwhelm, or overtake the plot, which is complex but will not have you stringing up red thread and newspaper clippings across a bedroom wall (unless you are one of those people, in which case we cannot help you). 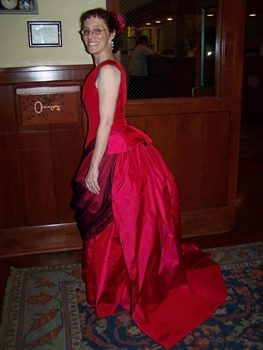 Mueller, who describes herself as a seamstress and amateur historical costumer, poses for a snapshot at a costumed event in an 1880s gown she made herself. Photo credit: Kris Fazzari

The royal family of Borenguard has been in power for a long time. The same royal family, unaging, undying—at least of natural causes. One of the kingdoms under their iron fist makes a special drug, Rejuv, that keeps wrinkles, gray hairs, and mortality away. To drink it is to stay young forever.

And if one of their subjects is especially beloved, they are also similarly preserved. Mistress Charm is one of those lucky subjects, though she might not use the word “luck” to describe her situation. A long, long time ago, she was a gently raised young lady in a distant country. When that country fell to Borenguard, so did she. Forever physically the age of 19 and implanted with a mindlock, Mistress Charm is the official concubine of the king.

She and her boneghosts make the best of their situation, some more successful than others in surviving within the constraints of a deeply patriarchal world.

“Strict gender roles present a punishing inflexibility. I wanted to look at what women can or will do to survive such restrictive roles and what they will sometimes do to one another to keep their own heads above water,” Mueller says. The boneghosts are not always easy companions, at least to each other, but they work together to keep Orchard House going, their unique abilities and personalities both a gift or a curse in any given moment.

Mueller and her son KJ at a local pizzeria in Portland

Over the course of decades, Mistress Charm conducted the daily business of Orchard House and attended to the king’s needs. It was almost inevitable in that unnaturally long span of time that she would eventually come to care for the king, and that he would come to care for her. It was never romantic—it would be hard for anyone to love their captor, the person who dictates the parameters of her mindlock, and the man responsible for the destruction of her country. But the two formed a friendship in what odd little way they could.

The rhythm is broken when the king sends for Charm. She comes to his bedside at his dying moment, his body rapidly giving in to the poison that has spread through him. His dying wish is not a wish but an order: the killer is among his four sons—find him, kill him, kill them all if need be, and install a new king. It plants itself deep within her mindlock.

She can do nothing but comply.

THE BONE ORCHARD is Mueller’s first novel. She has a second novel in the works but can’t speak about it due to her mindlock. Someone please find her and free her—we can wait to hear about it, but we don’t want to.