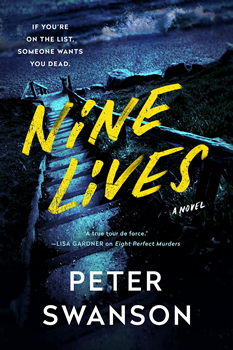 It all began with a list. Turns out, a murder list. In bestselling author Peter Swanson’s newest thriller, NINE LIVES, the names of nine seemingly random people appear on a list that is delivered to each. No explanation, no indication of what is to come.

The murderer who created the “list-of-nine” is the only one who knows what the targets have in common. “Their deaths were an attempt to add order back to a chaotic world, and the list itself was just part of that order. And being on that list only told them something that they should already have known. That death is coming for us all.”

One of the names on the list is FBI Agent Jessica Winslow. She knows none of the other eight who are scattered all over the country and live very different lives. What the hell does it mean if your name is on this list? She doesn’t know—but she’s going to find out.

When someone murders Kennewick, Maine, resort owner Frank Hopkins on a nearby beach, he has the paper with nine names clutched in his hand. Of course, Frank’s name is on it. 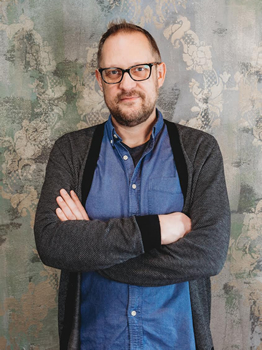 The similarity of the list and Agatha Christie’s novel And Then There Were None is not lost on Kennewick police detective Sam Hamilton. Although he doesn’t know who’s behind the targeted murders, he suspects the link between the nine is something close to home.

Swanson introduces readers to the nine people on the roster. We get a glimpse of each around the time they receive the list. None of the nine knows the others, and they seemingly have nothing in common, not even their locations or occupations. Although most initially dismiss the correspondence as junk mail, the people on the “list of nine” begin to die. Can law enforcement determine who is behind the agenda and what the victims have in common before there are none?

Below, Swanson talks with The Big Thrill about what inspired the novel, revenge versus justice, and his advice for fellow writers. 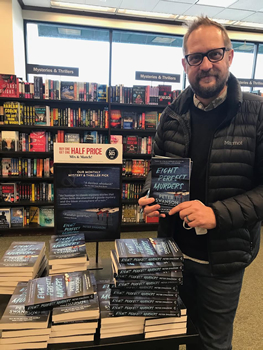 What was the inspiration for the story in NINE LIVES? Was it primarily Agatha Christie’s And Then There Were None?

I’ve always wanted to write a version of that story, strangers being brought together and bumped off one by one. What held me back for a long time was that I couldn’t come up with a place for it to happen, somewhere similar to an island but not an island. It was only when I realized that the strangers didn’t need to be geographically isolated—they could just all receive the same letter—I knew I had the story I wanted to tell.

Can you talk more about the murderer’s plan to restore order to the chaotic world by taking lives to equalize a prior horrible wrong?

Some of it is simply insanity, of course, or to put it less dramatically, extreme misguidance. But I also think the impulse to right the world is a bit universal. Because if you don’t believe in an organized religion or an afterlife or karma, then the world can seem both chaotic and cruel. Horrible things happen to good people. And bad people seem to get rewarded. If they spend too much time considering these issues, a decent person might believe the answer is to dole out their own version of justice. 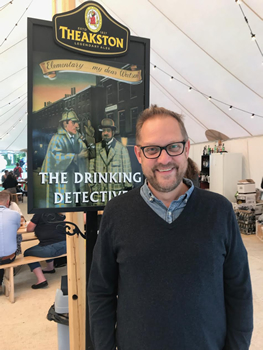 Where is the line between justice and revenge?

I suppose on a basic level that justice is impersonal, and revenge is not. In And Then There Were None, the killer is obsessed with justice and seems disinterested in the notion of revenge. My killer is also more interested in justice, or maybe a version of karma. One thing justice and revenge have in common is that a person can pervert the desire for them quite easily.

Foremost, I hope the book is entertaining and interesting. If I had to come up with a message, I would suggest the book might operate as a memento mori, a reminder that we are all going to die someday, and there is no escaping that fact.

A book blogger who recently interviewed me told me she had a great idea for a book but was scared to start writing it because she didn’t feel ready. I told her to write the story and let it be bad. Too many writers try for perfection. All first drafts are bad in some ways, and if you are bothered by writing bad prose, you’re never going to write any prose at all. 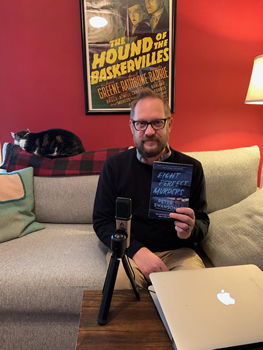 Swanson records an introduction to Eight Perfect Murders for readers.

I’m calling it a semi-sequel. It’s essentially a new story, but two of the main characters from The Kind Worth Killing [Editor: Swanson’s 2016 psychological thriller] are involved in the narrative.

I love swimming in the ocean so much that I’m trying to keep doing it throughout the year. With that in mind, I just took a dip in the Massachusetts ocean in mid-February. I’m still cold.