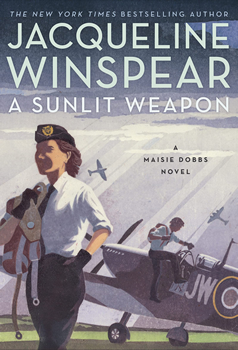 Clever, courageous, and independent, Maisie Dobbs is one of the most beloved characters in the historical mystery genre. The brainchild of bestselling author Jacqueline Winspear, Maisie’s roots reach back to the First World War. Winspear’s grandfather, badly injured in the Battle of Somme, suffered from what was then known as “shell-shock.” Her grandmother was partially blinded in a munitions factory explosion. And in World War II, her mother survived being buried under the rubble of a bombed building.

Winspear’s attempts to understand her family’s trauma certainly played a role in her decision to set her historical mysteries during these two World Wars. Perhaps they also helped her develop the compassionate worldview her readers have come to love.

Since the series debuted in 2003, Maisie’s adventures have spanned more than 30 years. In the first, Maisie comes of age and becomes a nurse in the first “Great War.” The 17th, A SUNLIT WEAPON, takes place in 1942, as Maisie investigates a crime that could change the course of World War II. There’s even a nonfiction book, What Would Maisie Do? that explores some of Maisie’s most popular words of wisdom.

It’s always a challenge to keep a long-running series fresh. Winspear’s approach is to keep it fresh for herself and hope that trickles down to her readers. “I didn’t want to write a series where every story could have happened on the same day in the same place,” she says. “I wanted to move through time, to have my characters grow and change and be impacted not only by their work, but the events of the day and their personal lives. I wanted to create an ongoing saga, if you will—a body of work following characters through one of the most tumultuous periods in history.”

A SUNLIT WEAPON begins with a young woman, Jo Hardy, flying a Spitfire for the women’s section of Britain’s Air Transport Auxiliary (ATA). In a moment of high spirits, Jo decides to bend the rules with a little stunt flying. Her joyful moment is interrupted by a bullet striking the plane, fired by a civilian below. This act sets off a chain of events that later draws Maisie into a web of kidnapping, murder, and political intrigue.

The descriptions of the planes and the ATA experience are authentically and lovingly drawn. When asked if she has a pilot’s license herself, Winspear replies, “Good lord, no. Mind you, I was once at the controls of a DC10 over the Libyan desert (there’s a story!) I like old aircraft—they’re like old cars, far more interesting! I would love to fly in a Spitfire or Lancaster. However, for someone who does a lot of flying, I’m rather a nervous flier.”

She remembers the DC-10 experience fondly. “The plane was off autopilot, and I was at the controls, though the first officer was right next to me in his seat. There were no passengers on board, just air crew. It was the sort of thing you could do 40-odd years ago and no one was any the wiser and it didn’t end up on Instagram to get you into trouble. But I always loved sitting on the flight deck for take-off and landing—one of the few perks of being air crew.”

Clearly, Winspear has an indomitable spirit. Asked if she’s had any adventures while researching a book, she says, “It’s all an adventure to me. I’ve walked the Great War battlefields in France and Belgium, and I’ve taken steam trains in various parts of England. I’ve spent hours at the Imperial War Museum and have a lovely memory of marching my late parents across a bleak shingle beach in Dungeness, Kent. Research takes on so many aspects, and because I’m curious, it’s all an adventure. But the key is not to get so swept up in your research that you forget you’re a storyteller, writing fiction, not narrative non-fiction. Research is like an iceberg—only seven percent of it should be visible above the surface in the story.”

A disciplined writer, Winspear sits down at the keyboard at 8:30 in the morning, stops for a break around 1:00 pm, then works until around 5:00 pm. “Mornings are for creating,” she says. “Afternoons are whatever needs to be done in the way of admin, then perhaps some more background reading.”

Asked about her writing process—Plotter? Pantser? Any habits or rituals?—she says, “Absolutely no rituals or habits—and I wonder why this question is so often put to writers and artists. Why don’t we ask lawyers and doctors that question? They probably need rituals more than someone who writes a novel. I’d like to go into an operating room knowing the surgeon had taken a moment to align her skills with some sort of divine intervention and a bit of visualization. I don’t overly plot, and I don’t fly by the seat of my pants. I know where I’m going before I hit the road, but the great thing about a map is that if you want to veer off somewhere, you have a place to come back to.”

Winspear has a no-nonsense approach to productivity. “Get the story down and continue on, even when you know it’s not your best, because once the story is out on the page, the clay is on the wheel, and you can make all the iffy bits better.”

Her advice to aspiring authors is similar. “Just write and finish your novel/short story/essay—get the clay on the wheel and fashion it into your best work from there. Then submit it to agents/editors—they don’t know who you are and what you’ve done until you tell them. They can’t come after you and kill you, so don’t be afraid. I finished my first novel while recovering from a dreadful riding accident. After that, I didn’t care who I sent my sample pages to, and I wasn’t scared of what they thought about me. As far as I was concerned, the worst had already happened. I knew what could hurt me, and it wasn’t a rejection letter. Finishing my first novel meant that I was in the game. I had no idea how big that game might become, but I knew I was in it when I had a finished manuscript. So get in the game and then try to take it further. Oh, and be the very best writer you can be—if the game is worth playing, it’s worth playing well.”

She doesn’t tolerate “writer’s block” in herself. “I have the freedom to write what I want when I want,” she says. “I don’t risk losing my life for my writing. There are thousands of writers around the world who would give anything to have that freedom. So writer’s block? Not when I’m free to write anything I wish—and not when there are writers living in countries where writer’s block is a couple of guys dragging them off to be tortured.”

Not surprisingly, she has a new project in the works—a standalone novel to be published in 2023. She’s also developing a new series and a new nonfiction project.