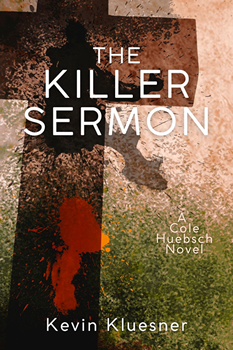 When an aging priest in rural Wisconsin gives an impassioned Christmas homily condemning abortion as murder and exhorting his parishioners to stop it, a former mayor responds by starting a hunger strike in City Hall, and the editor of the local weekly newspaper begins running a counter at the top of each edition that estimates the number of abortions performed since Roe v Wade.

A third member of the congregation takes a more lethal approach and begins to target reproductive rights physicians for murder.

Cole Huebsch is a pro-life leaning Milwaukee FBI agent. Michele Fields is a pro-choice leaning reporter. But they’ll need to set aside their differences to catch the killer before the country is torn apart.

THE KILLER SERMON is a fast-moving thriller that reminds us that our words matter and that regardless of how big our differences on divisive issues, we can still find respect—and maybe more.

Debut author Kevin Kluesner took a turn in The Big Thrill’s hot seat to discuss more about his thrilling debut, THE KILLER SERMON.

What prompted the story?

This story has been nagging me to write it for more than 20 years. I was drawn to the idea of two characters who stood on opposite sides of a divisive issue who had to set aside their differences to catch a killer.

Abortion is a very controversial topic, and the book shows one main character on each side of the argument. Why did you choose this topic? 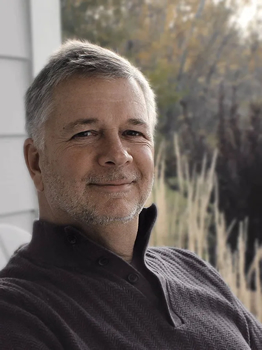 I didn’t consciously choose to have abortion/reproductive rights at the center of my story. I would have been a fool to do so, since I’m certain it made the degree of difficulty in finding a publisher that much higher. The characters chose me, and the issue came with it. That said, abortion has been a hot issue in the United States for as long as I can remember. It may simmer on the back burner from time to time, but then it boils over onto the front pages of our newspapers again. And I believe fiction writers should have a voice in the issues of the day.  Harper Lee’s To Kill a Mockingbird and John Grisham’s A Time to Kill contributed to our understanding of prejudice and discrimination. If I have a message, it’s that our words matter; they can go off in directions and at a velocity we cannot control. My other message is that no matter how much our opinion may diverge on divisive issues like reproductive rights, we need to respect each other.

Tell us about the origins of Cole Huebsch and his unusual last name.

My wife’s maiden name was Huebsch. My in-laws had three girls and no boys to carry on their last name. Fred Huebsch was a good father and role model, and we lost him six years ago. Using his last name was a way for me to pay homage to him. The name will live on as long as the book is in print or remains on someone’s shelf. It’s not an easy name for some to pronounce, but it means pretty in German, so it’s got that going for it.

Is Michele Fields based on any real reporter or an amalgamation of several?

Michele was drawn from a number of strong women I’ve known and worked with in my life. And her desire to write more important stories is more a reflection of all of us who want to have a larger positive impact on the world.

What was the research like for THE KILLER SERMON?

With the reputable sources available on the internet, it was easy enough to review the history of abortion violence in the US and other key statistics and the facts.  But I used a lot of different early readers who I knew had very different opinions on the issue to ensure my characters’ points of view were authentic.

What do you expect people to get out of reading this novel?

Even though THE KILLER SERMON revolves around a potentially explosive topic, it’s a book that people are enjoying at the beach or while cozied up in an overstuffed chair by the fire. It’s nearly 90,000 words, but people universally tell me it’s a “quick read.”

I am halfway through writing Book 2 in the series. The 2020 Democratic National Convention was canceled in Milwaukee due to the pandemic, but in Cole Huebsch’s universe, it takes place. And things move quickly after a US senator from the great state of Wisconsin is gunned down while out for a run the morning after delivering a stirring convention address. It looks like an easy case, but not much is as it seems in The Killer Speech.

Kevin earned both a BA in journalism and later an MBA from Marquette University. He’s worked as the outdoor writer for a daily newspaper, taught marketing and management classes at both the undergraduate and graduate level, and served as the administrator of an urban safety net hospital.

The Killer Sermon is his debut novel. It introduces FBI agent Cole Huebsch and a thriller series set in Wisconsin and the Midwest. Kevin might be the only person to claim membership in both the American College of Healthcare Executives and the International Thriller Writers. He lives in New Berlin, Wisconsin, with his soul mate and wife Janet.