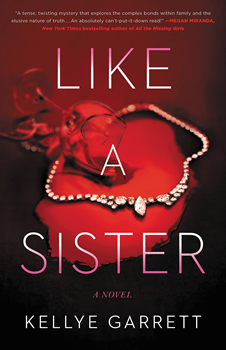 Kellye Garrett didn’t intend for LIKE A SISTER to be about feminism. She wasn’t intentionally writing about female empowerment or racism, and she certainly didn’t intend for her new novel to include humor. What she did intend, however, was to write a more serious book than those in her award-winning Detective by Day series.

Rather than the procedural format she’d developed with her debut, Hollywood Homicide, Garrett wanted to try her hand at domestic suspense. The result is LIKE A SISTER, a serious—and yet humor-filled—book about a young Black woman looking for answers about her sister’s death.

“I had been reading a lot of domestic suspense, and I felt like there wasn’t a lot of diversity in the genre,” Garrett says. “And so I started thinking, if this character was a Black woman and the book had a more domestic suspense feel, what would that look like?”

The story actually began after Garrett read a headline in the New York Daily News about a pregnant reality star who was found dead in the Bronx, in possession of cocaine and with no pants on. Garrett thought the headline was disrespectful—it was about a Black woman, and her cause of death was treated dismissively. 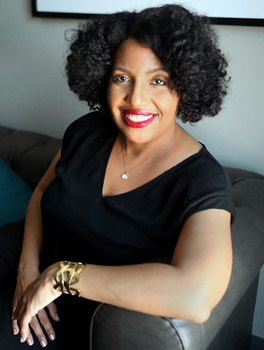 “I didn’t think they would do that to a Kardashian,” she says. “My story isn’t about that woman specifically because by all accounts she’s amazing, and Desiree is a mess, but I was fascinated with the idea about how a glam reality star could go from glamming it up in Hollywood to dying on a street corner in the Bronx.”

Having found her victim in Desiree, Garrett then needed the story to go with it, which she came across while walking through New York one day. LIKE A SISTER became about family bonds—specifically sister bonds—which is also when Garrett realized she was veering into domestic suspense territory for real.

“The Day books are meant to have more of a heightened sense of reality, but I wanted this book to be more realistic,” she says. “It still has humor and wit in it, but that was not my intent. I’m just a super sarcastic person, and I just thought, Why not lean into that? It can still be a serious book while still having those moments of humor because that’s just Lena’s outlook on life.”

It’s not the only thing Garrett shares in common with her sassy protagonist. Like Lena, Garrett understands a lot about the important bonds between sisters. She has two half-sisters she doesn’t consider as “half,” and her mom has three sisters. Watching—and living with—those sibling dynamics helped inform Lena’s character and the core of the novel. 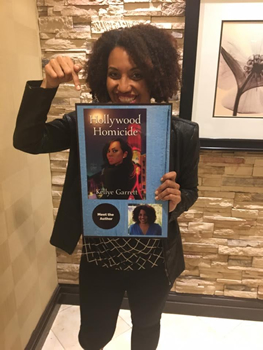 Garrett shows off her Meet the Author poster from a NAIBA conference book signing.

“I understand sister relationships, and I think my dedication to my sisters is, I love you, even when I hate you,” she says. “It’s a complicated relationship. I have a brother, and I love him too, but the bond is just a little different.”

Throughout Lena’s quest to uncover what happened to her sister, she faces many obstacles, many of them because she’s a single Black woman—something Garrett hadn’t seen in a lot of domestic suspense books and wanted to explore. Garrett knows a little about that dynamic too, including some of the microaggressions her protagonist experiences on her journey to truth.

That said, LIKE A SISTER isn’t intended to be a commentary about racism.

“I wrote a book about a Black woman, but it’s not about being Black,” she says. “But it would be very unrealistic for her to be Black and not deal with microaggressions. Everything from the headline in the beginning of the book to the police dismissing Desiree as just being another victim of overdose, to not really giving her any attention—these are all small things that are just an everyday reality. I think when people think of racism sometimes, they think it’s someone calling you the N-word or burning a cross on your front lawn, but in reality, most people of color deal with microaggressions more than racism.”

Those microaggressions don’t stop Lena from pursuing answers about her sister’s death, but they do sometimes take her outside her comfort zone. Again, Garrett understands. After spending almost seven years in the mind and soul of her Detective by Day series protagonist Dayna Anderson, Garrett found herself in the unfamiliar position of trying to navigate a new character. A character much more like Garrett herself.

“Dayna and I aren’t anything alike, but I think Lena and I are a lot alike, though I think Lena is a lot pettier than I am,” she says, laughing. “As I was writing, sometimes I would find myself thinking, Oh, that’s not how Lena would react. There’s this whole part in the book where Lena is backstage at a concert, and the original way I had written it had her sneaking into places. But Dayna snuck into places. Lena would not. So I had to take a step back and rethink how Lena would react.” 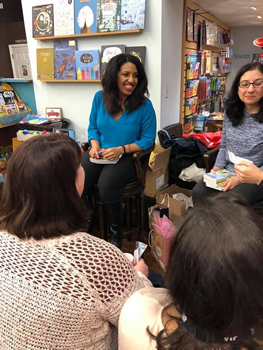 Garrett celebrates her birthday and a book release with Hummus and Homicide author Tina Kashian at Words bookstore in Maplewood, New Jersey.

It’s a process Garrett is going through once again as she works on her next book, another standalone novel of domestic suspense. She got the idea for it while staying at a friend’s four-story row house in Baltimore. She was sleeping on the third floor and thought: There could be a dead girl in the foyer and I wouldn’t know how it got there.

“I thought her neighbors would say something like, ‘Who was the Black girl staying at your house and why did she kill somebody?’” Garrett says.

Following that spark of inspiration, the new book is about a Black woman and her boyfriend who are visiting the New York area. The protagonist comes downstairs at the Airbnb to find the body of a missing white girl, and that her boyfriend has disappeared. The story takes place in a rich enclave, giving it an even more traditional domestic suspense vibe—while keeping Garrett’s goal of adding more diversity to the genre top of mind.

It’s a cause Garrett is passionate about. In Garrett’s acceptance speech for her Anthony Award—one of four she received for Hollywood Homicide—she mentions a list that talks about all of the books published by writers of color. It was a staggeringly low number. And while there is certainly a movement toward increased diversity in the industry, Garrett says she’s cautiously optimistic that it represents real change, and not just publishers chasing a trend. 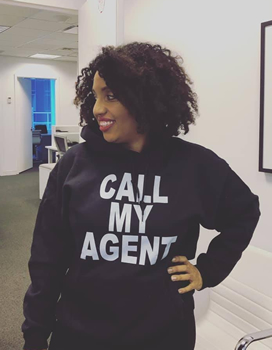 “I write about Black people not because it’s trendy, but because it’s my reality and it’s what I want to write and read about,” she says. “Can you imagine being told that someone isn’t going to buy your book because it’s not trendy anymore? I’m not a trend, I’m a person. I think a lot of writers of color are excited about how things are changing, but we’re also nervous, because we don’t want to be the reason someone says, ‘We tried, but no one bought the book.’ I think people expect us to be in competition with each other, but we all realize that if one of us wins, we all win.”

Lifting other authors up—whether it’s through her social media channels, her work in organizations such as Writers of Color and Pitch Wars, or being a strong voice of advocacy at events—is one of the most rewarding aspects of her career, especially since, admittedly, the process of writing isn’t her favorite. Like many authors, she’s happiest to “have written”—even though Garrett has been writing professionally for most of her life. She began her career as a journalist, then wrote for the CBS TV drama Cold Case before transitioning to fiction, and in addition to writing novels now works as a media relations specialist for companies in the New York area.

She’s busy—but the dream is to write fiction full-time.

“I want to publish books for the rest of my life,” she says. “I don’t think I’m going to get up every day and be happy to write, but I definitely want to have a long career. I do want to make a living at this.”