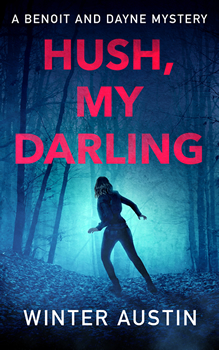 In HUSH, MY DARLING, book two of the Benoit and Dayne Mystery Series, author Winter Austin takes readers into the midst of a serial killer.

Forty-six-year-old Elizabeth (Ellie) Benoit moved back to Juniper, Iowa five years ago and won election as sheriff of Eckardt County, even with no formal law enforcement training. Residents of the county were sick of their reputation as the “most corrupt county in Iowa.” She and her red border collie, Bentley, would make sure that the era of scandals was over.

Nine months before, Lila Dayne was sworn in as a deputy sheriff. She’d moved to Juniper in need of a fresh start. As a Chicago police detective, she’d not only been deeply involved in the I-80 serial killer investigation, she was also one of his victims. Two years ago, he’d whispered Hush, My Darling, to her before brutally stabbing her. Although during her recovery, Lila was addicted to opioids, that’s now behind her. But her PTSD is still strong.

When Lila checks on a body lying in a field, the words Hush, My Darling are carved into the victim’s torso—the only words the serial killer whispered to Lila when he’d attacked her and left her for dead. She’d told no one until now.

Of the killer’s 43 suspected victims, Lila is the only one who survived, and she realizes she’s his “unfinished business.” The message is obviously for her, and she spirals into fear and anger. Lila always wanted to be a mother, but the killer took away that opportunity, along with her unborn child.

Dr. Olivia Remington-Thorpe is Eckardt County’s medical examiner and Ellie’s best friend. Olivia and her ER-doctor husband, Dominic, are “two of only a handful of Black Americans in the county.” Not only is Olivia hard at work performing the victim’s autopsy, but she launches her own investigation of the I-80 killer’s pattern.

Austin gives readers a fast-paced narrative with a didn’t-see-that-one-coming end. Here, she chats with The Big Thrill about her inspiration, how she uses setting in her plots, and what she’s doing when she’s not writing killer thrillers.

What gave you the idea for HUSH, MY DARLING’s plot? 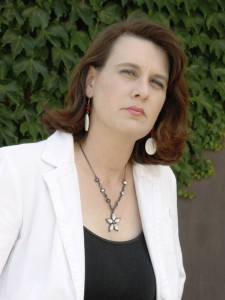 The original idea came from listening to true crime podcasts about serial killer Israel Keyes, then adding in the cold cases of women abducted along major interstates and found murdered. More and more of my plots get a boost from listening to podcasts or watching true crime shows. I’m getting better at putting my spin on it. I’ve used real-life murders in my books in the past—there’s a lot of merit behind the statement “real life is stranger than fiction.”

At first, writing HUSH, MY DARLING was a hot mess. It tested my mettle because I was pulling at threads until I found the right aspects for the plot. I’m such an organic pantser I drive my normally organized self batty to the point it creates writer’s block. Then, when it fell into place, I still had to clean up a lot. I have a fantastic editor who knows me well enough to pick apart the things that weren’t working or needed fleshing out. This plot was tricky because I had to tread a fine line between giving the reader enough and holding some back.”

How has living in a rural community informed your writing?

Living in Iowa for most of my life, the rural setting is so ingrained it’s hard not to let my roots show. Although I’ve written books set in cities, it requires me to spend a lot of time researching and watching videos of people and places to get the feel right. I don’t have to do that with my rural settings, especially when set in my home state.

Greed, evil, and ill-intent aren’t special to largely populated areas. I think people from urban areas and cities sometimes forget that rural people can, and will, do bad things. Many of their crimes don’t differ from anywhere else. We boast Midwest-nice, but it’s not always the case. I want readers to see a side that is usually buried under the glitz and glamour that movies and TV have portrayed rural life to be.

You are more than your past. I learned this after I left the part of Iowa where I grew up and lived elsewhere for a time. When I returned and met people I grew up with, they had it in their minds that I was the same person they last knew, but I wasn’t.

Lila has to learn this lesson for her to overcome her trauma and survive. We either embrace what happened to us and let it strengthen us, or we succumb to the demons and never learn.

Right now, I’m writing book three of the Benoit and Dayne mystery series. This one will push my boundaries as a writer, because I plan to add elements that are out of my norm. The book will deal more with Elizabeth and her past, as well as her reasons for becoming sheriff. I’ve been building up to a showdown between her and the ex-sheriff she usurped. Book three will get more into the meat of the corruption that had plagued Eckardt County for decades.

Tell us more about your workshops for young writers?

I have a few workshops that I use depending on the age group. The What If? workshop was really popular. I use plots from books kids typically have read and give them ideas of how to create alternate scenarios. With the older group, the Opening Lines workshop is popular. I’m also trying to come up with other workshops for the future.

When we’re not isolating because of COVID, I give these workshops through our local Area Education Association young writer’s conference held at a local college—one I attended twice as a youth. It cemented my desire to be an author. I always dreamed of coming back and teaching what I’ve learned to budding writers. I’m hoping local schools will give me an opportunity to spend a class talking about the publishing process or something writing related.

As much as you’d love to give up on that day job, don’t. The publishing industry is volatile and, with the uncertainty of success, it’s best to never throw all your eggs into one basket. I’ve been at this for two decades, and the ebbs and flows are more rollercoaster than smooth sailing. I’ve watched people peak and then crash when the newest phenom shows up. Now if you’re retired, go for it!

According to customers who call in to the agriculture-based company where I work, I’m a great salesperson, which is funny because I’ve only been a sales/customer service rep for a few months. However, everything I know about sales came from selling myself as an author and selling my books to editors and publishing industry people. I’m a fast learner—if I don’t know it, I can bluff my way through until I get the correct answer.

And my name garners a lot of attention.

Winter Austin perpetually answers the question “Were you born in the winter?” with a flat “Nope,” but believe her, there is a story behind her name.

A lifelong Midwest gal with strong ties to the agriculture world, Winter grew up listening to the captivating stories told by relatives around a table or a campfire. As a published author, she learned her glass half-empty personality makes for a perfect suspense/thriller writer. Taking her ability to verbally spin a vivid and detailed story, Winter translated that into writing deadly romantic suspense, mysteries, and thrillers.

When she’s not slaving away at the computer, you can find Winter supporting her daughter in cattle shows, seeing her three sons off into the wide-wide world, loving on her fur babies, prodding her teacher husband, and nagging at her flock of hens to stay in the coop or the dogs will get them.

She is the author of multiple novels.