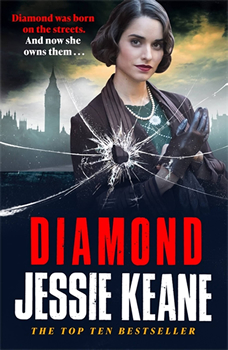 Behind every strong woman, there is an epic—possibly a “blockbuster”—story. DIAMOND by Jessie Keane is the story of Diamond Dupree, who grows up at the beginning of the 20th century on the streets of London. By the time she’s an adult, she owns those streets.

DIAMOND is a historical thriller. Why choose to write about France and England just after WWI?

“I chose post-war England and France almost at random,” Keane says. “I’ve written about the 1960s, 1950s, 1930s, and somehow I worked my way with DIAMOND to the First World War. It was never my intention to write a ‘historical’ thriller, really. It just sort of happened. But it’s a fascinating period, and it makes for a big, epic blockbuster of a novel, and Diamond has a ball with it: mingling with post-war gangs in London and then meeting Hemingway, Picasso, and Chanel in Paris.”

Along with those historical figures, Keane puts Diamond in the same room as Gertrude Stein and Zelda and Scott Fitzgerald. What tempted her to bring those historical icons into the narrative of the novel?

“I wasn’t tempted to involve those monumental figures from the literary and artistic world any more in the book than I did,” she says. “I didn’t want to swamp the reader with the Parisian atmosphere; I wanted them to have just a flavor of it, to infuse the piece with authenticity.”

Diamond has three major romances in the novel. How did Keane balance the romance aspect of the story with the thriller?

“I balance the romance with the thriller part of the story by pacing it carefully,” she says, “so that one never overpowers the other. A lot of juggling of various chapters goes on in the final draft stage. I think every thriller I’ve ever written has a hint of a romance in it, because I think life would be very dull without that. I like to pull the reader in to the conflict and the family dramas, to make them care about my characters, to make them linger in the reader’s mind long after they’ve finished the book.

“There’s a strong element of ‘beloved enemy’ in DIAMOND,” Keane says. “She has three romances, and we’re just waiting for her all the way through to finally find the right one and forget the rest. It helps to keep the tension going, right through to the end.”

Diamond works as an artist’s model—his muse—for a while. What are the similarities between a great painting and a great piece of prose? 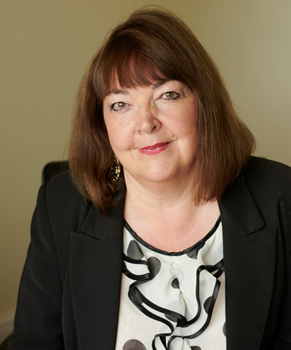 “I used to paint a lot in my youth,” Keane says, “but I have to say, words are so much better than oils. In writing DIAMOND, I’m calling on all the five senses of my readers, asking them to smell the cordite from gunfire in London and the roses in Marquis’s French chateau gardens, to hear Bow bells in the East End, to absorb the whole thrilling experience. To me, much as I love them, paintings just can’t compete.”

“I always write in very short chapters,” she says. “I think this has something to do with my personal aversion to reading very long ones. Maybe I just have a very short attention span. I am certainly aware that it’s crucial not to overload the reader, and the short, snappy chapters seems to keep them enthralled and turning the pages.”

What makes a successful “blockbuster” novel in Keane’s opinion?

“A successful blockbuster novel to me,” she says, “is an epic one that covers a lot of ground and could easily be used as a doorstop. My books (DIAMOND included) tend to be about 120,000 words in length, and I have a terrible time trying to make them any shorter. I like to really dive into my characters, to make the reader fall in love with them. To me, when a reader tells me that they didn’t want one of my books to end, that is when I know I’ve succeeded in what I set out to do.”

So is Jessie Keane an outliner or a “pantser”?

“I never actively plan a novel,” she says. “I have friends—great writers—who plan meticulously from start to finish, before ever putting a pen to paper. They tell me that if they get stuck on one part of the story, they just write another part because they already know what’s going to happen.

“For me,” she says, “sadly, that just won’t work. I know that I would be bored even before I started. When I do start, I have no real idea of where I’m going. A character walks into my head and he/she starts to do something. Maybe I’ve read something, seen something on the TV, and this kicks the whole thing off, but I have absolutely no idea where the thing is going, what period I’m in, what’s going to happen to my lead character, until I am about 40,000 words into it, and then the mist will clear, and I will begin to know where the final destination should be. Then I send my editor an outline. Sometimes I send her something before this point, but I am only guessing about what’s going to occur. I’m not really sure. Sorry if this sounds terribly arty, but it’s how I work. I do about five drafts of the novel before I sent the finished thing to my editor and my agent. I start off deeply in love with the book and I end up nearly hating it.”

A visit to Jessie’s website—www.jessie-keane.co.uk—will show how proud she is of her “gypsy genes.” How does that background affect her storytelling?

“I am of Roman gypsy descent,” she says, “and it’s true that I was born in the back of a wagon, but my heritage hasn’t had a great deal of influence on me—except for the fact that I love moving house! I’ve always been very interested in the gypsy way of life, and bare-knuckle boxing did feature in one of my novels, Fearless. I do admire gypsies for their free-spirited ways, and my grandmother did read the tarot. I do too, in a very amateurish way. She also predicted I would be a famous writer when I was just three years old! I have a writer’s fork on my palm, apparently.”

Finally, we asked Keane if she could put together her dream panel for ThrillerFest, who would be on it, why, and what would the topic be?

“If I could put together my dream panel for ThrillerFest,” she begins, “I would have Stephen King because he is quite simply a legend, and Charles Dickens because when I was very young I read A Christmas Carol and fell in love with it. Also I would have Thomas Hardy, a Southern Englander like me, just to chat to him and thank him profusely for Far from the Madding Crowd, which I re-read frequently. William Shakespeare, of course. And the late, great Sue Grafton. I promise not to ask any of them where they get their ideas from, the one question that throws every writer I know into a panic. Who knows where it all comes from? The ether? Is it a gift from God? We just have to be grateful for it, that’s all. But we simply don’t know the answer to that one.”

Dubbed ‘Queen of the Underworld,’ Jessie Keane is a multi-million bestselling English writer of blockbuster novels. She is of Romany gypsy stock. She was born in the back of her grandmother’s barrel-top wagon, and her family thrived until the family firm crashed into bankruptcy. Her father died when she was a teenager, and she fled to London, finding there a lifelong fascination with the criminal underworld that would fuel her writing for years to come—she’s on her seventeenth book now.