Bringing Joy into the Darkness 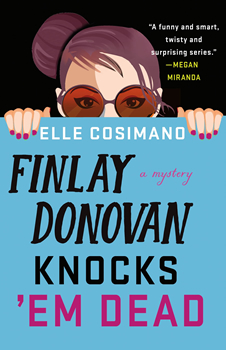 It’s not hard to rationalize how fictional characters end up being “struggling writers” on the page. Authors, for better or worse, are often advised to “write what they know.”

However, few aspiring scribes—fictional or otherwise—end up as accidental assassins.

But that’s exactly what happens to Finlay Donovan, the stressed-out single mom and struggling writer in Elle Cosimano’s adult mystery debut, 2021’s Finlay Donovan Is Killing It. Finlay is back in this year’s FINLAY DONOVAN KNOCKS ’EM DEAD, this time to find out who wants her ex-husband dead. Sure, he wasn’t the best partner, but he is the father of her children…

In their quest to save him, Finlay and her bestie, Vero, soon find themselves navigating a rabbit hole of soccer moms disguised as hitmen and a little more involvement with a Russian mob than they’re comfortable with. Finlay’s book deadline is looming, but there’s no hope of rekindling her muse with her ex’s life on the line.

Cosimano is hard at work on the third and fourth installments of this comedic mystery series (phew), but she took time out of her busy schedule to answer a few questions for The Big Thrill about writing relatable characters and finding joy in the darkness.

Finlay Donovan hit the literary scene hard—her character is brilliant. I’m not surprised she’s become a series character. What was her most significant mark of growth from the first book to your upcoming release? 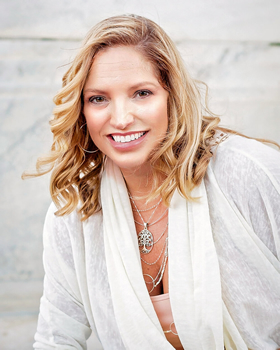 Thank you! It still blows my mind a little to hear people say things like that. It didn’t really feel hard-hitting so much as a slow build. I still remember combing through my local bookstore to find one lonely copy the week the first book released. I think people discovered Finlay and related to some aspect of her situation or character, and the books passed from hand to hand—librarian to patron, bookseller to customer, reader to reader—because she is someone many of us can relate to. In the first book, we see a bone-weary single mother and struggling novelist who just wants to earn enough to pay her overdue bills and hold on to her kids through a custody battle. Finlay falls into the business of murder through an accident born of desperation, and we’re along for the ride as she’s forced to dig herself out of the muck. But in FINLAY DONOVAN KNOCKS ’EM DEAD, Finlay’s arc answers the thematic question “When does the heroine get to become the hero?” In book 2, Finlay’s made the conscious choice to involve herself in a murder mystery, embracing the role of reluctant hit-mom in order to save the life of her philandering ex-husband, who has been targeted by someone who wishes him dead. In this book, we see Finlay take calculated risks and make more empowered choices. We see her prove to herself, her family, her love interests, and her ex that she’s capable of being the hero of her own story.

Finlay is easy to love because she’s so authentic and relatable. The Big Thrill is as much for aspiring authors as it is for readers. What tips would you offer to help writers create sympathetic, relatable, and authentic characters?

My characters never really ring true until I’ve identified deep, personal, and meaningful stakes for them. The character should yearn for something, not just want to achieve something. Stakes become higher when they are tied to emotionally driven motives, and that yearning should come from a deep and meaningful place. That’s when we sympathize for them, when their struggles and goals reveal the layers of their character.

In FINLAY DONOVAN KNOCKS ’EM DEAD, Finlay is once again caught up in a messy situation that could prove deadly—not only for others, but also for herself. I’d love to know more about the inspiration for this book. 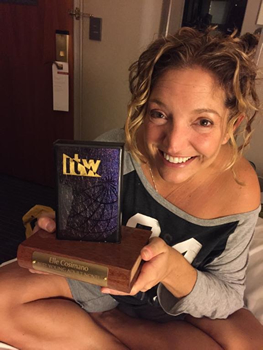 The inspiration for both books really came from the desire to explore the ever-changing roles of mothers and the expectations society places on us. At the time I started writing about Finlay, I was spread thin, frustrated with the impossibility of balancing motherhood with a fragile career that required time alone to create, resentful of the market’s preoccupation with the next hot new face as my own was beginning to age, a new gray hair sprouting with every night of sleep lost because my daylight hours had been sacrificed to prioritize the needs of someone else. As women and mothers, we’re constantly redefining ourselves, but often those definitions revolve around those we care for, not the person we dreamed we might become one day. Mothers are rarely featured as the hero in popular stories. I wanted to explore the arc of a woman who is at a crossroads in her life and redefining herself according to her own terms. In the last book, Finlay is rediscovering herself as a woman, an author, and even a lover. In this book, she’s grabbing those discoveries by the reins and claiming the role of the hero too.

I love how you delve into the complicated emotions of divorce, especially when kids are involved, while still infusing humor. Why is that balance important to you? 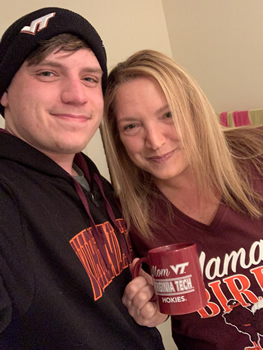 Cosimano and her son don their Virginia Tech gear.

I’m very lucky to have an extremely supportive partner in my spouse; I don’t have any experience with divorce beyond watching and supporting some close friends who have been through it. I think what I’m really delving into are the elements of betrayal, fear, insecurity, and loss, and to some extent, everyone can identify with those emotions. And yet, in spite of those dark themes, these books are fast-paced, adventurous romps, and there’s a lot of dry, self-deprecating humor in Finlay’s voice. While a lot of people might not connect comedy with darker elements like divorce or murder, humor can be a great coping mechanism for dealing with trauma, and I wanted the tone of Finlay’s story to be both triumphant and hopeful. Humor helps to maintain that balance when she’s faced with a looming custody battle, her ex’s horrible fiancée, loads of dead bodies, and the attention of a dangerous mob boss.

No spoilers, but what are you most excited for readers to experience in FINLAY DONOVAN KNOCKS ’EM DEAD?

We’ve all suffered a lot over the last two years. More than anything, I want to bring a little joy to the darkness. This book is bonkers in the best possible way! I’m excited for readers to laugh, gasp, and cheer with Finlay and Vero for a few hundred pages. I can’t wait for readers to escape into this hilarious world for a while. 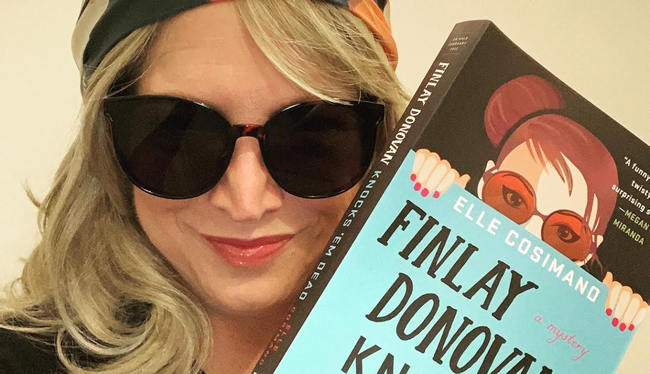 Every protagonist needs a good sidekick, and Vero is one of the best. Please share with us more about how Vero came to be and what you envision for her as the series progresses.

Vero and Finlay are true friendship goals! Everyone should have a ride-or-die like Vero in her life, but she didn’t start out as a permanent character in the story. At first, when I introduced Finlay’s nanny into the story, I expected she would be there for a scene or two, an obstacle Finlay would have to overcome when Vero accidentally stumbled onto Finlay while she was trying to resuscitate a dead body. But these two had such great chemistry on the page! Their dialogue and choices felt so natural, and their differences made them so perfectly symbiotic. I had so much fun writing that first scene and seeing how these two women complemented each other, and I knew Vero was going to become a seminal character, both in the series and in Finlay’s life.

As for Vero’s character, we know from Finlay Donovan Is Killing It—when Vero offered to help dispose of the body for 40 percent of the contract money—that she needed the cash for something. In FINLAY DONOVAN KNOCKS ’EM DEAD, we slowly begin peeling away the mystery in Vero’s past.

Finlay is notoriously struggling to put words on the page, pushing up against a deadline—how relatable! How much of Finlay’s writing life mirrors yours? 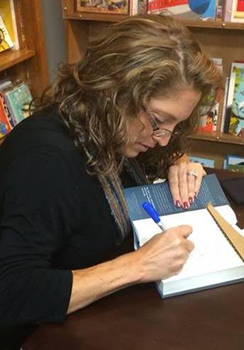 Our writing life is probably our strongest commonality right now! Motherhood is a full-time job in itself, especially during COVID when we’re all forced to make concessions in our workdays to support our children and partners. My days are a chaotic blur. I’m sharing workspace with my husband, homeschooling son, and two noisy dogs, and this isn’t exactly conducive to creativity. I’m a silent writer—I need to eliminate noise and distractions to be productive, so I mostly work at night. I devote my daytime hours to juggling administrative tasks, publicity, and promotion. Then, like Finlay, I start writing in the evening and work long into the night. And yes, as I’m still wrangling a messy draft of book #3, I too am chasing my deadline.

Prior to Finally Donovan Is Killing It, you wrote very successful young adult novels. What prompted the move to adult books, and would you consider revisiting YA?

I guess successful is a relative term. My YA novels had won oodles of awards and enjoyed some lovely accolades, but in truth, they’d never really sold very well. When I conceived Finlay’s character, I was on my third publisher with floundering sales. I was struggling to stay under contract, fighting with a fickle market that churns through authors whose books don’t produce well. In many ways, Finlay’s voice came from my own frustrations with it all. I poke a lot of fun at publishing in these books, leaning into satire at times, and I think some of the move from YA to adult, specifically in the voice of this character, was a subconscious choice rooted in catharsis. I love writing about young adults, and I think I still have YA stories to tell, but I’ve found a wonderful home in this grown-up space, with a hugely supportive publishing team and enthusiastic fans, and I’m happy to settle in and enjoy this for a while. I hope Finlay and Vero have a long future ahead of them.

What can you share about your next Finlay Donovan books?

I am hard at work on books #3 and #4 of the series. I can’t say too much without spoiling the end of book #2. Suffice to say, I have left readers (again) on a stunning little cliffhanger, and book #3 picks up right where that mystery leaves off.