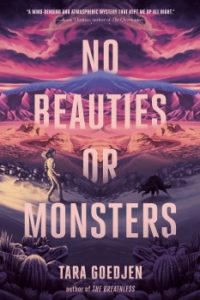 ONE DESERT TOWN.
MANY DISAPPEARANCES.

For fans of Stranger Things and Veronica Mars comes a new YA mystery about a girl whose desperate search for her missing friend unearths dark secrets, preternatural threats, and a truth that could ultimately tear her family, friends, and town apart.

Welcome to Twentynine Palms, where nothing is what it seems.

Tara Goedjen recently spent some time with The Big Thrill discussing her latest thriller, NO BEAUTIES OR MONSTERS:

When I was living in California, I took a trip to Death Valley in the Mojave Desert. The landscape there seemed so surreal, so isolating and extreme, that I knew it would lend itself well to a mystery-thriller. And then, after I researched the legends and lore surrounding the area, the appeal was almost irresistible. The Mojave National Preserve and Joshua Tree National Park cover a lot of territory, and there are so many rumors of missing hikers, strange sightings, remote military bases—well, the story of NO BEAUTIES OR MONSTERS started coming into shape immediately, and it was really fun to write. 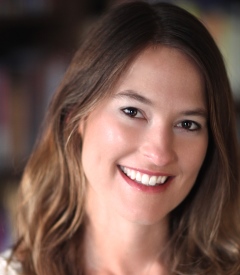 NO BEAUTIES OR MONSTERS is driven by the mystery at its core: a small desert town full of many disappearances. But it’s also a genre-bender, since there’s a very human threat that exists in the book, along with the possibility of an inhuman one. Just like in my debut novel, The Breathless, I enjoyed playing with uncanny spaces: that territory between the real and the imagined, where you’re not sure if what you’re experiencing is truly happening or not. A lot of my interest in the uncanny comes from the very vivid nightmares I used to have as a kid, and that almost palpable feeling of being afraid of the dark, even when your rational mind is telling you not to be.

Some of my research took me deep into occult territory, and into all the stories of Charles Manson hiding out in the Mojave and what he believed it represented (clue: a gateway of sorts). And even though those particular details didn’t make it into the book, the overall tone was definitely influenced by the darker side of the desert, so to speak.

Tara Goedjen never stays in one place for long. She has worked for a publishing house in Australia, as a tennis coach in Spain, and she wrote NO BEAUTIES OR MONSTERS on the island of Guam and in the desert of New Mexico. Now she lives and writes in a rainy corner of the Pacific Northwest. She is also the author of The Breathless.