The Good, Bad, Ugly, and Hilarious of the Vietnam War 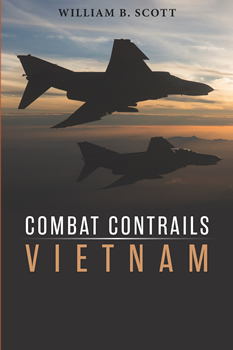 Almost half a century has passed since the end of the Vietnam War, a period in time many veterans—and society—would be happy to forget. But author William B. Scott doesn’t want those heroes, or their stories, to go unrecorded.

To that end, COMBAT CONTRAILS: VIETNAM, his recently published anthology of stories told by veterans of the war who are now ready to share their experiences dives into the good, bad, ugly, and hilarious of the Vietnam War with first-account tales that will send chills up your spine.

In this interview with The Big Thrill, Scott shares insight into why now is the perfect time for this anthology, how he went about curating these 18 truly memorable stories, and why this book is an important—and compelling—educational resource.

What was the motivation or inspiration/catalyst for revisiting that time period in COMBAT CONTRAILS: VIETNAM?

I was moved to write COMBAT CONTRAILS: VIETNAM, after hearing many friends’ stories, few of which had been captured in print. Once several of those men passed away, it became acutely evident that Vietnam veterans are aging and departing at an ever-increasing rate.

Recent high-profile books have honored World War II and Iraq/Afghanistan veterans, but those who fought in Vietnam largely have been overlooked or ignored. Yes, a number of them have written superb fiction and nonfiction books about combat in Vietnam. However, far too many vets are going to the grave, taking untold stories with them.

The Vietnam War period was divisive, tumultuous, deadly, and seemingly endless. Nevertheless, thousands of Americans stepped up and did what the nation’s leaders demanded, regardless of how stupid and senseless their assigned missions might have been. I believe it’s high time we honor those warriors by capturing their stories to inform subsequent generations.

The book contains 18 unforgettable stories told by veterans. Please share your process for curating these stories—how did you find participants? How did you select which stories would make it into the book? 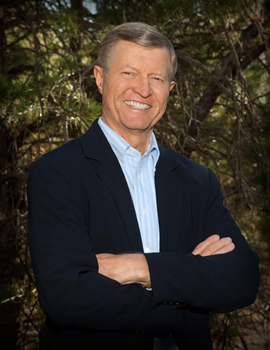 Two pathways, if you will: One, as the Rocky Mountain Bureau Chief for Aviation Week & Space Technology, I launched a “Contrails” section of the magazine in the early 2000s. These were simply “good flying stories,” which I solicited from readers. I wrote the first few, but in short order, I had more than 120 submissions spanning the aviation and space spectrum—from crop duster tales to hair-raising experiences of Mercury astronauts in orbit. We only ran one story per month, and quite a few Contrails yarns were still waiting when I retired. Some were too good to leave in a filing cabinet. Years later, my publisher and I started talking about compiling those into a book or series covering a variety of aerospace sectors.

Two, I knew quite a few pilots, soldiers, sailors, and Marines who had served in Vietnam. I’d worked or flown with many of them in the flight testing business and met others as an Aviation Week writer. But, when Karl Lippard, a crusty Vietnam-veteran Marine, related his incredible combat experience at the Ca De River Bridge in mid-1965, I was astounded to learn that this massive battle had literally been covered up. In short, Karl’s incredible bravery was worthy of receiving the Medal of Honor, but he was never debriefed after the battle and was never awarded a Purple Heart for a wound. Why? That question was too intriguing to leave unanswered. So I wrote his story and published it in a number of online veteran publications. What followed was an unbelievable series of events.

Hence, Karl’s untold tale, and others I’d heard over the years, inspired this book. I selected a variety of stories that fit a theme my publisher and I settled on: Giving readers a taste of what it was like to serve in the Vietnam War—the good, bad, ugly, and hilarious. I wanted to feature flying stories that included fighter and attack aircraft, helicopter operations, search-and-rescue missions, and “trash haulers,” the unglamorous transports that carried critical supplies, personnel, refugees, and even a cranky water buffalo. Soliciting those from friends led to recommendations that I talk to vets they knew. Before long, I had a long list of candidate stories.

Navy Blue Angels team, after Scott’s flight in BA #4. The team flew a full show at their Pensacola, Florida, “home.”

What is your personal connection to this time period and this war?

Although a Vietnam-era vet, I didn’t fly in-country. I was flying then-highly classified missions locating and collecting airborne radioactive debris from nuclear weapon test detonations in Russia, China, and other locations. But I often witnessed the demeaning nastiness dozens of friends and colleagues suffered when they returned to the States from Vietnam. Spit upon, called baby killers, and branded as racist—or worse—those warriors (often recovering from wounds) simply clammed up and never talked about their war, the messy one America supposedly lost and wanted to forget. I felt it was important to honor these veterans before it was too late. 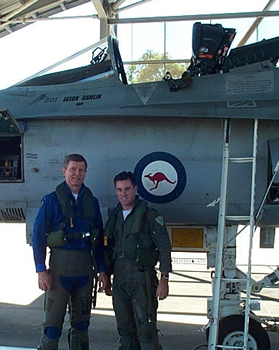 Prepping for an air-to-air combat training flight in a Royal Australian Air Force F/A-18 Hornet at the RAAF Fighter School.

I understand that proceeds from this book will be donated to Show of Support, a wounded-warriors charity. What can you tell us about that charity and why it’s important to you that this book supports it?

Show of Support (SoS) was cofounded by a good friend, who flew the A-4 Skyhawk in Vietnam. A retired two-star general, he’s also one of the authors who provided a story for this book. When he explained what motivated him and his cofounders to give today’s wounded veterans—and their spouses/partners—unique several-day experiences, I wanted to help SoS with an ongoing revenue stream from royalties. Vets who’ve participated in the annual event have reported truly feeling appreciated. It’s easy to say “Thanks for your service,” but SoS backs the words with tangible actions and gifts.

You have an extensive background in nonfiction—you’ve written more than 2,500 stories and received 17 editorial awards. Impressive! Your love of research is evident. How did your work for magazines prepare you for completing this nonfiction book?

Because I wrote a batch of pilot or flight reports for AW&ST, as well as technical “back-of-the-book” features, an astute colleague suggested I adopt techniques author Jon Franklin described in his superb book, Writing for Story. Essentially, I employ the same storytelling tenets we ITW members use in writing fiction to make nonfiction more interesting. My first attempt was an AW&ST series focused on the military response to al-Qaeda terrorist attacks on 9/11. The series was quite well-received. Veterans’ stories are ideal candidates for the same approach—relate each as a story, not “just the facts.” Even though COMBAT CONTRAILS: VIETNAM is nonfiction, I wanted the stories to read like a thriller, conveying both facts and emotions, as much as possible. 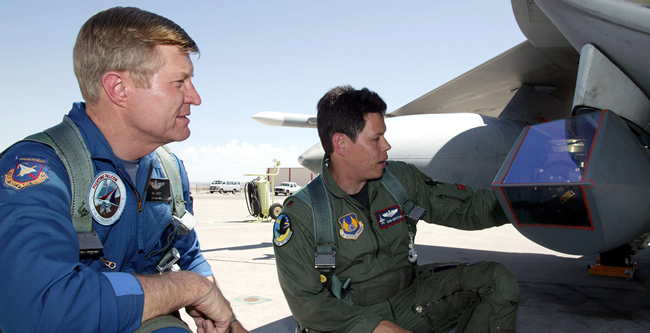 Preflight checks, before a flight to evaluate the “Sniper” targeting pod on an F-16 Fighting Falcon at Edwards, AFB, CA.

Was there anything surprising you learned while curating and editing COMBAT CONTRAILS?

Not particularly surprising, since many of these veterans are long-time good friends, but I was definitely struck by their humility. I had to probe and literally pull information from several guys, who downplayed their actions. For example, Jim Brennan related how he had to ditch a shot-up search-and-rescue Navy helicopter in the ocean. Kicking his way out the cockpit door, as the helo rolled inverted and sank, he reported seeing a profusion of bullet holes in the underside of his doomed chopper. “That’s why our fuel disappeared so fast!” he deadpanned.

Similarly, John Casper’s account of his F-105 Thunderchief being shot down and having to eject over enemy territory—for the second time in a matter of weeks—was typical of these vets’ humble sense of humor: “I could see the coastline, so pulled it out of burner and started a climb. But crossing a ridge line, all hell broke loose. A chunk of my wing came off, fire lights came on…I kinda knew I’d been hit…” 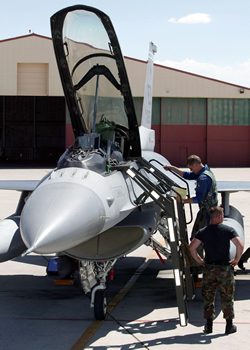 Saddling up for that “Sniper” flight. (Based on hops like this, Scott wrote more than 40 cover stories or “Flight Reports” for Aviation Week and Space Technology magazine.)

You also write fiction! How does your nonfiction writing help with your novels?

Two-plus decades of writing technical features and news stories for Aviation Week were invaluable training and experience. We had to write tight and keep techie jargon to a minimum, ensuring readers ranging from airline pilots with a liberal arts degree to big-brain PhD engineers could understand our stories. When writing pilot/flight reports for the magazine, I also tried to take the reader into the cockpit with me, sharing the flight via word-pictures. I try to do the same in fiction, adding elements that don’t make it into nonfiction pieces—e.g., via fiction, I can describe what it’s like to pull 9gs in a fighter aircraft—tunnel vision, “graying out,” tightening leg and abdomen muscles, and breathing in short spurts as one fights to avoid blacking out.

I’m finally returning to Black Aura, a novel I had to shelve in 2010, thanks to a family tragedy. This is a techno-thriller featuring a stealthy near-space vehicle carrying a nefarious payload that beams novel, highly classified signals to Earth. Because these tailored signals and waveforms can alter people’s thoughts and actions, my hero test pilot and his Checkmate “black world” operator allies must neutralize it and its more-dangerous follow-on vehicles. They’re opposed by a powerful Las Vegas-based villain who has a stunning, super-secret connection to a long-ago assassination and a global ring of really bad actors.