What’s Waiting in the Woods 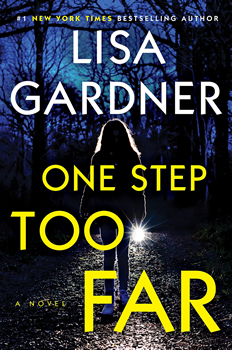 New York Times bestselling author Lisa Gardner is back with another gripping thriller featuring her newest amateur detective, Frankie Elkin. Greeted by starred reviews from Kirkus and Booklist before her January 18, 2022, release, ONE STEP TOO FAR is the enthralling follow-up to last year’s Before She Disappeared.

This time, Frankie is investigating the disappearance of Tim O’Day, a golden boy who vanished in the Wyoming woods during an alcohol-soaked bachelor party/camping trip with his four best friends. Five years later, Tim’s father, Martin, is going back into the woods with those same friends for what has become his annual search for his son. After five years of fruitless searches, Martin thinks this time will be different. He doesn’t know how horrifically right he is.

Gardner was kind enough to sit down with The Big Thrill after an amazing trip to Antarctica. (“The penguins! They’re just as cute as you ever thought they would be!”) She shares her love of hiking, the meaning of friendship, and thrilling news about what’s next for Frankie Elkin. 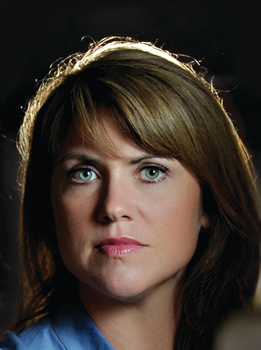 After the events of Before She Disappeared, Frankie leaves Boston—and the tentative sprouts of a relationship with Detective Dan Lotham—and finds herself on the road again, looking for her next missing person to find. When she reads about Martin O’Day’s newest effort to find his son Tim, Frankie knows she was meant to help. She muscles her way into joining Martin, their guide Nemeth, Tim’s bachelor party friends, Bob the Bigfoot Hunter, and the team of Luciana and her cadaver dog Daisy for her first-ever foray into the woods. Frankie’s almost exclusively a city-dweller, and she quickly realizes the deep Popo Agie Wilderness in Wyoming is far outside her normal habitat.

“What I loved about this book for Frankie, is that we’re taking her as a loner, and we’re putting her into a pretty complicated group with seven other people who, in her mind, is a group that’s not a group. You have three subgroups: the leaders, the bachelor buddies, and the two other professionals. And then you take someone like Frankie, who’s such a loner, and now she’s got to master [hiking] quite quickly and find a place in a very complex group dynamic.”

It’s so much fun to see Frankie’s bravado and confidence in her abilities as a finder of missing persons devolve into panic as the realization of how unprepared she is for life in the wilds of nature begins to hit her (and that’s before strange and unsettling things begin to happen). She can barely make it through the seven-hour hike, and then she’s faced with all the duties and requirements still needing to be done before she’s finished for the day. But she sucks it up. She has a job to do—finding Tim O’Day and becoming a member of this group, which goes against her nature as a professional outsider. 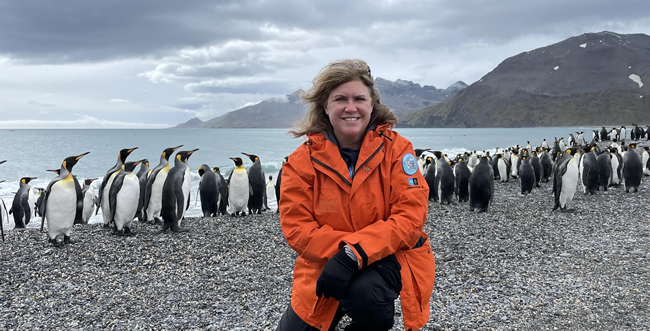 Gardner visits with king penguins on South Georgia Island near the Antarctic Peninsula.

“One of the things I love about Frankie,” Gardner says, “is that I feel she represents us. She’s very down to earth. She’s hiked all day and then she’s supposed to help set up a camp, and she has no idea what to do. I’ve been on hikes like that with much more experienced hikers. Sometimes fake it ’til you make it is the best that we can do.”

Gardner’s descriptions of the Popo Agie Wilderness are rich and vivid, in part because she is an avid hiker herself. “I live in the mountains of New Hampshire, and the mountains are a lifestyle here. In recent years, I started to do more aggressive hikes with a group of friends, and we decided we should probably learn some wilderness survival training.”

That survival training and her love of hiking inspired the plot and setting for ONE STEP TOO FAR. “We took a [wilderness survival] class, an all-day class, and it was just amazing. And you know how it is as a writer. I took wilderness survival for me, but by the time I was done, I had a book to write.” 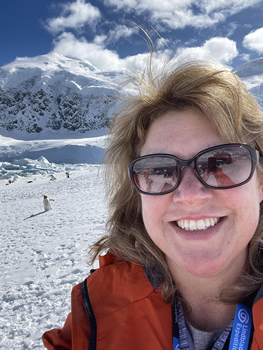 While she wanted to sink herself into the setting of her book, that wasn’t in the cards thanks to COVID-19. “Normally my process for writing is to go to a place and spend time there. Partly because I think if you want a setting to come alive, you can’t just be saying what it looks like. It’s what does it sound like, smell like? What distracts you in a random moment? So the fact I couldn’t go out to Wyoming killed me.” Thankfully, her own hiking practice and copious brochures for the Popo Agie Wilderness helped her create a setting so vivid you can smell the pinesap.

As Frankie witnesses the bonds between these friends, she reflects on her time in Boston and her own nomadic life. “Frankie’s a person who leads an anti-life,” Gardner says. “She doesn’t have the house, the kids, the job, the marriage. She’s rootless. She wanders. And she’s obsessed with solving other people’s problems.” 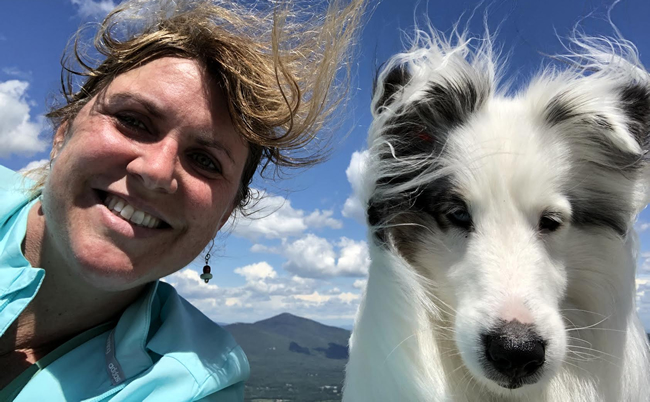 Gardner hikes closer to home, in the White Mountains, with her dog Bowie.

It’s not like Frankie doesn’t have problems of her own to work on. She’s a recovering alcoholic still weighted with the guilt of what her disease cost the others around her. Frankie’s solution to handling the guilt has been to find the long-lost loved ones of others. “It’s always easier to fix someone else’s life,” Gardner wisely says.

While Frankie lives in a world of things left emotionally unfinished, she is driven to provide the emotional closure she can’t have to others. “One of the things that’s important when you write about missing persons cases is just how insidious that feeling can be for that family left behind to never have those answers. To never be able to finish that last conversation or to have reconciliation after that last fight. That’s what makes this work so powerful and necessary. It’s what keeps Frankie going. It’s not just finding the missing; it’s bringing peace to the families.” 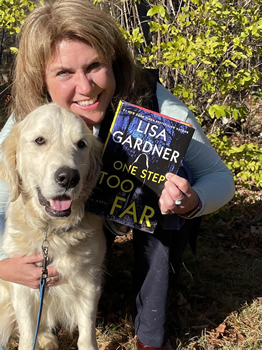 Gardner hangs out at Little Angels Service Dogs—all for the sake of research, of course. (Ed. note: Little Angels is a nonprofit group that trains dogs to assist people living with a wide range of disabilities. To learn more or donate, visit littleangelsservicedogs.org.)

Gardner isn’t just the author of almost 30 novels—she’s also the vice president of author services for the International Thriller Writers, a role she says she cherishes. “I love the International Thriller Writers. It has given me a sense of community. I have made some of my best friends through meeting other authors at conferences, and I feel the writing process is lonely, so forming your tribe, finding your people along the way is one of those ways we survive as artists.”

One initiative she’s particularly proud of is ITW’s Debut Author Program, which offers new authors resources and activities that will boost their book release and give their careers a solid launch. “There are some authors in the very beginning of my career—Tess Gerritsen being one of them—who were so incredibly kind and generous helping with my debut thriller. You want to give back. You want to pay it forward.”

Most exciting of all, Frankie Elkin will be appearing in the flesh on a screen near you. Academy Award and Golden Globe winner Hilary Swank has signed on to be the executive producer and star of a limited series based on Gardner’s compelling character.

We can’t wait to meet her!