Even Saints Have Deadly Secrets 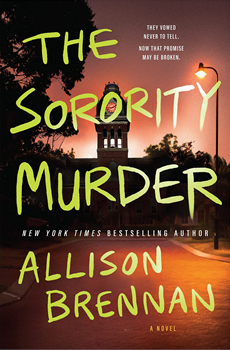 In her new thriller, THE SORORITY MURDER, bestselling author Allison Brennan mixes Greek life, a cold case, and the power of a podcast to find a killer.

Three years ago, Northern Arizona University’s Sigma Rho senior Candace Swain helped set up their annual Spring Fling charity event. She’d successfully fought to give the profits to Sunrise Center, where she volunteered to assist the homeless. Most everyone considered her a saint, except for a handful of her sorority sisters who knew what she was hiding. After all, they were part of it, too.

At the party, when Candace argues with several of her Sigma Rho sisters, including their president, Taylor James, everyone assumes it’s about the homeless man who came to see Candace. But the other party guests don’t know that the senior sorority sisters are keeping a deadly secret, and Candace wants to come clean.

That was the last time anyone saw her alive. They found her body a week later.

Now, senior Lucas Vega plans to resurrect the cold case surrounding Candace’s murder for his Criminal Justice senior project. He hopes to use his podcast, The Sorority Murder, to crowdsource clues about where Candace was for the week between her disappearance and murder. Because Lucas has no experience with podcasts, and of course has never investigated a murder, his mentor and chair of NAU’s Criminology and Criminal Justice Department, Professor Henry Clarkson, knows just what the podcast needs. 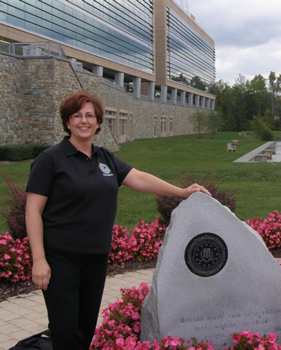 Regan Merritt had graduated from NAU under Henry’s tutelage 14 years before and retired from the US Marshals Service. When she visits the school to give a lecture on law enforcement careers, Henry has a request: that she provide her expertise to Lucas for the podcast. Although Regan suffers from trauma of her own, she has to admit she’s intrigued with Lucas’s theory about who murdered Candace and how, especially since he’s found inconsistencies in the autopsy report.

As Regan works with Lucas to resurrect the cold case, people call in to the podcast to report bits and pieces of information as to Candace’s whereabouts during the last week of her life. When a caller ends up dead, they know they’re onto something. Regan is also certain that Lucas is keeping a personal secret, but she’s not sure if it affects the investigation. Can they figure out what happened to Candace before the killer murders someone else?

Told in chapters alternating between the present and three years earlier, and with Candace’s journal entries, Brennan leads readers through the twisty story of a young woman who made a mistake and the dangerous classmates who want to keep her quiet.

Here, Brennan chats with The Big Thrill about her inspiration, the theme of friendship, and how podcasts and social media have changed the world.

What was the inspiration for the story in THE SORORITY MURDER?

I’ve loved true crime since reading In Cold Blood when I was in eighth grade. Cold cases have also fascinated me. There’s a plethora of television programming about murder investigations, both fiction and nonfiction, and over the last few years, podcasts have exploded. I don’t listen to many, but when I do, it’s usually a true crime podcast—and those about cold cases grab my attention. 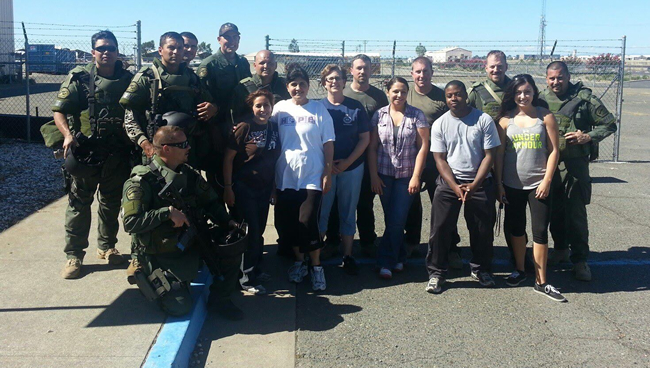 Before she left California, Brennan participated in the annual FBI SWAT training drills with multiple SWAT units. “I’ve been a hostage, a bad guy, and a victim,” Brennan says, “and have learned something every time.”

I have two kids in college, so college is always on my mind. Before starting this book, my daughter was looking at colleges, including NAU, where this book is set, so I was very familiar with the campus and programs. When I thought about writing a story focused on a cold case murder on a college campus, I picked NAU because of the beautiful location of Flagstaff, Arizona… and then thought, what if a student was doing the investigating? A student would be more likely to use modern technology, so the podcast idea popped.

How is the theme of friendship central to the novel?

All my books explore family dynamics and friendship in different ways, but THE SORORITY MURDER focuses more on friendship than family. The sorority itself is a perfect microcosm for how friends fundamentally become a family. What people do for these friends—to help, hurt, or protect them—is something I wanted to explore. Many people will do almost anything to protect their loved ones, but where is the line? What lines will we cross and why? And how does that make us feel about ourselves and our friends? Finally, what does it mean to be a genuine friend—what can we forgive and what would push us away?

Brennan at the gun range

How has crowdsourcing through podcasts and social media changed the way society processes information? And how has it helped (or sometimes hindered) efforts by law enforcement?

I can only speculate on this because I haven’t done extensive research on how social media has impacted law enforcement. For society, I think the benefit of social media is the access to information. Information is always good; it also connects people. The negative is that with social media, we expect immediate answers, and weeding through an overwhelming amount of information is daunting.

I would guess—and again, just a guess—that there are more benefits than drawbacks for law enforcement. For example, law enforcement now has a wealth of information through social media—what people have said, where they’ve been, how to track them, find their friends, re-create a timeline—which helps prove innocence or guilt. I follow several law enforcement agencies who will post missing persons on Twitter and Facebook and then update that they found the person. But whether social media had a direct effect is rarely mentioned.

More information is always good for law enforcement, but it’s a lot for a resource-strapped agency to dissect, and much of it is worthless. Also, pieces of information might create a false narrative. A one-minute video, for example, may not show what happened before or after they filmed, leading investigators down the wrong path.

One reason I picked a cold case for my fictional podcast is because I know that law enforcement doesn’t have the time or resources to investigate them unless new information surfaces. That gave my amateur investigator a lot more flexibility. 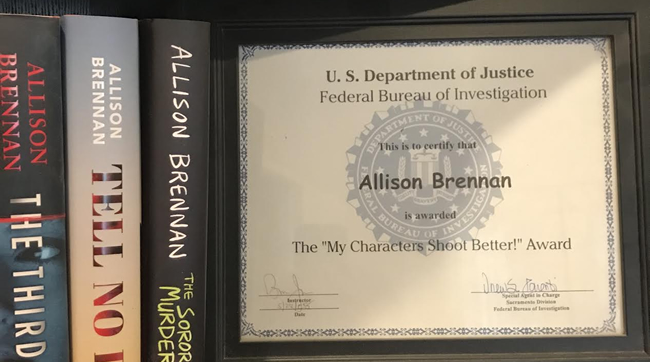 In 2008, Brennan participated in the FBI Citizens Academy and received training from FBI SWAT personnel. “This was my award,” she says. “I’m now a better shot.”

I write to entertain, so I rarely have a specific message. My readers’ time is valuable, and I want them to end the book satisfied that their time was well spent.

If there is any message, it would be that when someone disappears or dies, there is always more than one victim. The dead, of course, is the primary victim. But survivors—friends and family, and the community—are greatly affected. This is a theme I’ve written about many times because it’s something I think about whenever I read about a violent crime, and it’s universal in scope. Violence never impacts only one person.

How in the world do you write three books a year?

Right now, I’m writing about two and a half books a year (five books every two years). This is my full-time job, and I treat it as such. That means I write every day. Some days are more productive than others, but I write seven days a week. I love what I do, so that makes it easier, but it’s important that even when the muse isn’t cooperating, I spend time with my work-in-progress. I don’t beat myself up if I only get a few hundred words written, as long as I’m moving forward with the story. 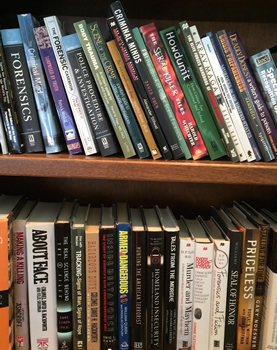 Which one? The Wrong Victim is the third Quinn & Costa book—it comes out at the end of April. I’m super excited about this book. Set in the San Juan Islands, the thriller starts with a charter boat exploding and nine people dead. I love this story, and my FBI characters are so much fun to write.

I also just finished writing the fourth Quinn & Costa book (untitled) which is set in the Louisiana bayou and very loosely based on the Jeff Davis 8, a famous cold case that has fascinated me for years. And while I wait for editorial notes on that book, I’m writing the second book in the Regan Merritt series.

Read a lot, write a lot, take advice that makes sense, and trust your instincts.

I’m an open book—I doubt there’s anything people don’t know about me, and if there is, it’s probably boring. A few little bits of trivia though: 1) my first job (after babysitting) was in a bookstore when I was 15, 2) I went through the FBI Citizens Academy in 2008 and won an award by the SWAT team leader—“My Characters Shoot Better than I Do” (in my defense, I aced the practice round but flopped in the competition), and 3) I’ll eat almost anything—except sushi and asparagus.