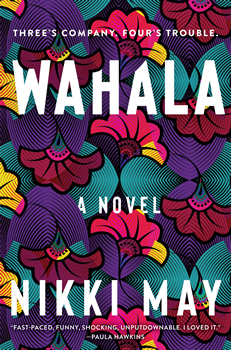 The Nigerian word for “trouble” is wahala—and in Nikki May’s debut by the same name, that’s what comes to town in the form of Isobel, the lethally glamorous former friend of three Anglo-Nigerian best friends living in London.

Ronke, Boo, and Simi are each trying to carve out their perfect life. Ronke is looking for love—sometimes in the wrong places—in her quest for 2.2 kids and the idyllic “happily ever after.” Boo pretty much has that—a kind husband, a gorgeous child. But she’s plagued by guilt and desperate to be the woman she once was. And Simi, well, she appears to be living the dream—at least on the surface. No one knows she’s crippled by imposter syndrome, or that she and her husband have opposite views of their future.

While each grapples with her own insecurities, fears, and ambition a little differently, one thing remains constant—their friendship.

In this interview with The Big Thrill, author Nikki May talks about her bold debut, an unforgettable (and often hilarious) story about friendship, culture, betrayal—and wahala.

WAHALA is such a gripping story about friendship—the good and the bad. I love the trio of Ronke, Simi, and Boo. I’d love to hear more about what, or who, inspired their characters, and how you developed their friendship. 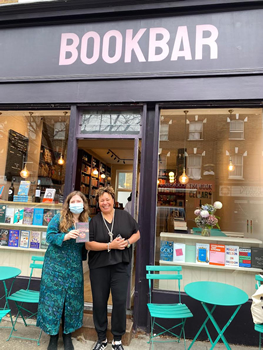 May (right) drops off a proof of WAHALA at BookBar in London, where she’s slated for a Q&A and signing on January 18.

WAHALA is not autobiographical, but I admit bits of me crept into my characters. So Ronke’s grandparents, who wanted nothing to do with her—well, mine were similar. Simi dropping out of medical school, freaking her parents out—I’ll put my hands up to that (sorry, Dad). And Boo’s desperation to fit in, to assimilate—I’ve been there, straightened my hair, and tweaked my name.

The friendship was inspired by my own tight-knit group of Anglo-Nigerian friends. We meet for long lunches in a restaurant that bears more than a passing resemblance to Buka, the one in my novel. Like my characters, we’re champion code switchers: we love the Super Eagles and the Three Lions, speak pidgin and the Queen’s English, listen to Fela Kuti and Ed Sheeran.

The novel is told through each of these women’s points of view, and I enjoyed how deeply we get to know each of them. Which character was easiest for you to write and why? Most difficult?

I had the most ridiculous character spreadsheet—it took 30 sheets of A4 to print it out in 12-point—and detailed everything from inside leg measurements to how old they were when they started walking. Stuff I would never ever need to use.

Ronke was the easiest to write. She’s the person I most want to be like, the friend everybody wants. And I love writing about food!

Simi was the hardest. She’s the most like me, and at times it felt like self-analysis! I share her crippling imposter syndrome, and like her, have managed to keep it well hidden. But I don’t have her figure, her wardrobe, or, unfortunately, the bank of Martin. 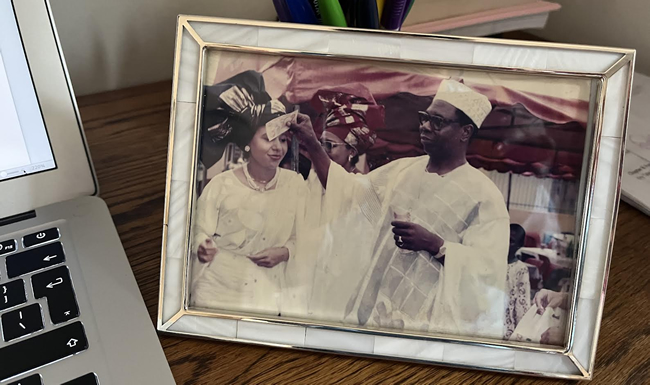 “This photo, of my father and me at my grandfather’s funeral in Nigeria, was on my desk while I was writing WAHALA,” says May. “I think it subliminally crept into my story, which at its heart is about the stories we inherit. Fathers play a rather large role.”

That friendship is tested—and ultimately cracked—when Isobel, a friend from their past, comes to town. Please share a little about Isobel—how she came to mind for you, and what role you ultimately hoped she would play in the novel.

Isobel was in my head from the get-go; she was always going to be the wahala of the title. Her motives for causing wahala (which means trouble) propel the narrative all the way to the killer twist at the end.

WAHALA is fiction, but there really is a small group of Nigerians who have a frightening level of wealth and an obscene sense of entitlement. They genuinely believe they are above the law. Worse, they often are. 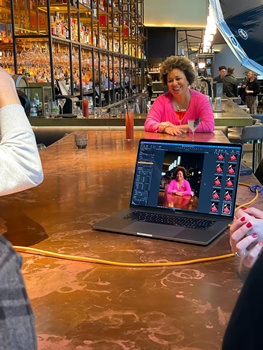 May being filmed for a promo video by her UK publishers. “This is at The Alchemist, a swanky cocktail bar in London—the sort of place the girls of WAHALA would meet up for drinks,” she says. “And yes—I drank the props!”

WAHALA is set in London, and you provide such great atmospheric description of where they live. Why did you choose to set the novel here, and what do you think that setting adds to the story as a whole?

WAHALA is, in part, my love letter to London, the wonderful city I lived and worked in for over 20 years.

Many of the settings in the book are hugely personal. Simi’s flat is a bigger and more luxe version of the flat my husband lived in when we first started dating. I used to walk my dog in Battersea Park every morning on the way to work, and he always got a treat at the Buddhist Peace Pagoda. It’s one of my favorite spots in my favorite city, so it had to go in the book—it’s where Ronke finally pieces things together.

I love how absolutely bold this novel is—a no-holds-barred look at class, racism, and friendship. Aside from a page-turning read, what do you hope readers take away from this story?

I really didn’t want to bang my readers on the head with issues—I just wanted to write an entertaining book. But, by getting to know Ronke, Boo, and Simi, I hope readers see that being mixed-race can be complicated. I’m used to people telling me what they think I am rather than asking me how I actually identify. Growing up in Nigeria, there weren’t many non-Black people, and I was universally referred to as oyinbo, which means white. Living in England, I’m universally referred to as Black. I’m both—half Black, half white—and I don’t think I should have to choose. 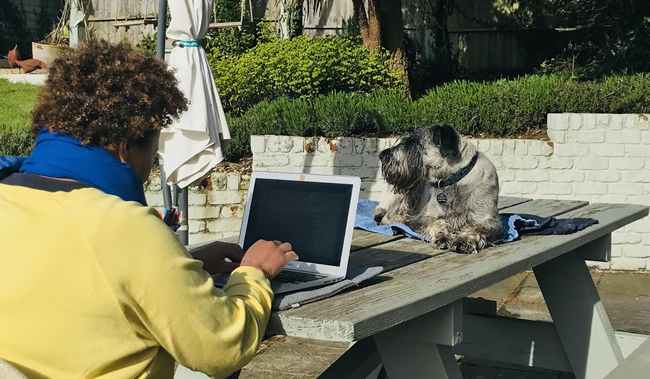 May works in her garden on a warm day. “This is my ideal writing scenario,” she says. “Good words are guaranteed!”

Nigerian culture—and especially the food—plays such an important role in the novel. Why was it important to weave this culture into your work? What role does food play in your creative process, if at all?

For me, what we eat is a fundamentally important character trait. Food was my way of making my characters truly authentic and distinct, adding a rich layer to their personalities.

I wanted to celebrate Nigerian culture, and food is such a central part of that. We have a Yoruba saying, “e wa jeun,” which means “come and eat.” If anyone walks in on you mid meal, even a complete stranger, it’s what you say. Food is the Nigerian way of caring. 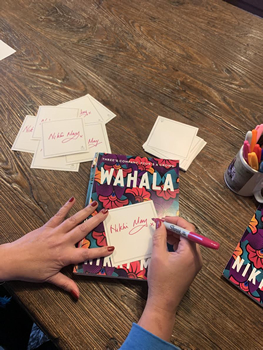 May’s first-ever author book signature. “This is the moment when I felt like a real author,” she says. “I’m signing bookplates ahead of my US launch at Loyalty Bookstores, which will be hosted by THE Paula Hawkins.”

WAHALA kicks off in a shocking way—that first chapter brilliantly lures the reader in. The Big Thrill is as much for aspiring writers as it is for readers. What do you feel is the importance of the first chapter, and what are some tricks you would offer on how to “get it right”?

I don’t think you can tell if your first chapter is right ’til you’ve finished writing the whole book. I tend to start all my chapters way too early and end up having to cut the first five hundred words—nobody needs to know that a character brushed her teeth and had a slice of toast for breakfast—but it helps me get into the flow.

The opening needs to do so much heavy lifting—you want to hook your reader with that first line, intrigue them enough to keep going. It’s difficult. I think the biggest tip I can give is to make sure your first chapter showcases your narrative voice. You want to create an intimate connection from the get-go; you want them to care. Writing from the heart is the best way to achieve this, but you can’t force it. You have to feel it.

I understand that WAHALA has been optioned. What can you tell us about where things are at with that?

It’s beyond exciting! WAHALA was optioned by Liz Kilgarriff at Firebird Pictures before my publishing contract was signed. I couldn’t be in safer hands: She did Bodyguard, Luther, and The Cry, and she really gets my book. I think she might actually beat me in a character quiz. It’s been greenlit by the BBC, which means it will actually get made. The script is being written by the incredibly talented Theresa Ikoko, who’s BAFTA-nominated for Rocks, a stunning, must-watch film.

Shooting is due to start in 2022. I’m determined to get a part as an extra in the big party scene, and seeing my name in the credits will be dream-come-true stuff.

Please tell us a little about what you’re working on next.

I’m working on my second novel. It’s a coming-of-age story called Brown Girl in the Ring, and is very loosely inspired by Jane Austen’s Mansfield Park.

It traipses through different timelines and delves into the thorny territories of race, class, and prejudice. At its heart, it’s a story about love, grief, and finding your place, with an added epic twist.

I’ve got a very shitty first draft which I’m trying to knock into shape. Book two is decidedly harder than book one—suddenly there’s a deadline and a weight of expectation. Wish me luck!