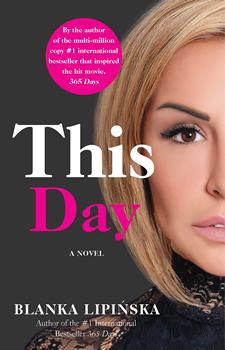 Polish author Blanka Lipińska had no intentions of becoming a writer. She’d been carving out a lucrative niche as one of the country’s most respected cosmetologists, when something in her personal life sparked the idea for a novel—her then boyfriend had little interest in intimacy.

What follows is an intense drama of lust that carries over three books. The trilogy, originally published in Poland, sold over 1.5 million copies, making Lipińska one of the highest paid writers in the country. The first in the trilogy, 365 Days, was made into one of Netflix’s most successful movies, with two more on the way.

The books are also being translated into English, with the second installment, THIS DAY, hitting shelves this month. In this interview with The Big Thrill, Lipińska talks more about the inspiration behind the trilogy, what readers can expect from Book 2, and how she feels about her books being compared to 50 Shades of Grey.

Given your former career as a popular makeup artist, it isn’t surprising that your novels have a certain aesthetic to them. There’s an underlying sense of glamor throughout the story arcs. How has your work as a cosmetologist informed your character development?

It didn’t at all. I see no connection between the job I did 15 years ago and the book I wrote eight years later.

How does one go from makeup artist to one of the most commercially successful authors in your country? Did you always know you wanted to write?

The book was an accident. I never wanted to be an author. It’s just that the guy I was with didn’t want to have sex with me [laughs]. So I wrote that sex for myself, and it turned out that women around the world liked it too.

THIS DAY is Book 2 in your trilogy. It began with 365 Days—which was made into a successful Netflix movie. Both the film and the books have stirred controversy and faced some heavy criticism. What do you want readers to take away from these books?

Rating the whole three-part story based on only the first installment is a bit like trying to taste a dish by only looking at the ingredients used to prepare it. When all those loud critics read the whole story, they’ll know what the author intended. Not before. I recommend reading the books before all three movies premiere on Netflix. It will allow viewers to gauge the differences between the books and the films and to understand it better. Besides, let’s not lie to ourselves—the book is always better than the movie [laughs].

The trilogy has sometimes been compared to 50 Shades of Grey. How do you feel about that comparison? Why do you think readers, women in particular, are drawn to stories in which men often play a more aggressive, if not abusive, role?

Women want their men to be manly. They miss men who know what to do, instead of having to be led by the hand. We like to fantasize about sex without consent, which does not mean we want to be raped. I read some papers on this, and they said that even in our sexual fantasies we don’t want to cheat on our partners. If the sex in them isn’t consensual, it isn’t wrong to think about it, right? We do resist, after all. Maybe ineffectively, but still. The sex in the fantasy is perfect, of course, and the man is super handsome. Everything is perfect, but the resistance is the most important factor. I know many women like their sex rough, with some playful domination. They just don’t tell their partners, afraid that they’d judge them. And those women find what they need in 365 Days.

The trilogy tells the story of a woman—Laura Biel—who is kidnapped and imprisoned by a man—Massimo—who gives her a year to fall in love with him. I would love to know what inspired not only this story, but also the primary characters. I read that part of Laura’s character is based on your life—how much truth is there to that?

Laura is me [laughs] and the story is 80 percent based on true events. But I’ll never tell which part is true and which is just fiction. All the characters in the book are real people too. This is a story inspired by life.

The books take place in Sicily, which I think adds to Laura’s fantasy—few places are touted to be as romantic as Italy. What about Italy did you want to capture in the books?

That the story happens on Sicily is just chance. The reason is pretty banal. I started writing after I got back from Sicily. And the island is considered to be the birthplace of the Cosa Nostra. I like other countries better, but this particular story just had to take place in Sicily.

I read that there will be two more movies from Netflix based on the second and third books. What can you share about the timing of those movies and your involvement? How involved were you with the first film?

Both 365 Days and THIS DAY end on quite a cliffhanger, which can be risky if readers don’t hang on for the ride. How did you weigh the pros and cons of ending the stories without fully completing the arcs?

Let’s begin by reiterating that I wrote that book for myself. It wasn’t supposed to be published. So I didn’t really care what anyone thought. Besides, in the beginning, 365 Days and THIS DAY were one book. And it ended completely differently. If I was to explain, I’d have to spoil some of it, and I don’t want that. Anyway, I think that to leave a reader wanting more is the perfect solution. I know because I read a lot, and I like it when books end unexpectedly. I like that feeling when I just can’t wait for another part!

After the release of Book 3, The Next 365 Days—and its subsequent Netflix movie—will you be moving on to new characters and a new story? What can you share about any upcoming projects?

When all the books and movies are out, the 365 Days stage will be over. Though about three years ago, I did start writing the fourth part, so maybe fans of Laura and Massimo’s story will hear some more about their favorite characters.

The December 2021 Edition of The Big Thrill