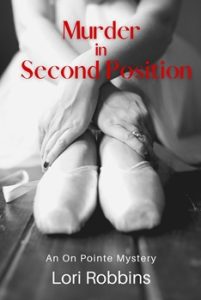 Ballerina Leah Siderova belongs onstage. Not in an interrogation room at Manhattan’s 20th Precinct. And yet, for the second time in less than a year, that’s where she has a starring role. It wasn’t her fault someone killed the autocratic new director of the American Ballet Company. And it wasn’t her job to find the killer. She tells the NYPD detectives investigating the case that when dancers say, “ballet can be murder,” they don’t mean it literally.

Most of the time.

It’s so easy to categorize people by what they do, as opposed to who they are. This is especially challenging in the world of professional ballet, because dancers are always one injury away from the unemployment line, often with little more than a high school education and an eating disorder to show for their years of hard work and dedication. In the course of MURDER IN SECOND POSITION, Leah learns there’s more to life, and to her, than being onstage. In this incredibly challenging time, it’s good to remember that our worth is not solely dependent on our careers.

In a world rife with injustice, mysteries offer a welcome antidote. Chaos and violence ensue, but in the end, order is restored. I love all mysteries, but have a particular affinity for amateur sleuths. They represent the people we aspire to be—the ones who are willing to fight for their beliefs. The idea that an ordinary person, under a certain set of circumstances, can do extraordinary things is extremely appealing.

I have one character who threatened to take over the book. She is the Mercutio of MURDER IN SECOND POSITION, although I love her too much to kill her off. In the end, I was able to keep her in her place, but she does like the limelight.

The biggest opportunity was, in fact, another challenge. And that was to extend the character arcs from the first book to the second. I didn’t want to put them back to where they began in Murder in First Position, but I did want to keep their essential qualities from changing too much.

I pretend to be a plotter, but the pantser side of me usually wins. And this is why the identity of the murderer came as a complete surprise…to me. The killer was that clever. Who knew?

Traditional mysteries often take place in charming small towns. I set mine in New York City, which is, more typically, the home of police procedurals, thrillers, and private detectives with a complicated past and a substance abuse problem. Although the world of dance is arguably a small community, the book is very much dependent on its larger setting.

MURDER IN SECOND POSITION takes place in New York City. Although much of the action occurs inside a dance studio, or onstage, the city is as much a part of the book as the characters. Diners, delis, and the ads that line the subway cars of the A train are as integral to the story as specific details about Lincoln Center and the Metropolitan Museum of Art.

A Tree Grows in Brooklyn, Harriet the Spy, and the novels of Susan Isaacs are an enduring influence. They’re all set in my favorite place, New York City, and they all have strong, appealingly flawed characters. And the last two are seriously funny. I’m not at all funny in person, but I can’t seem to write anything that isn’t. So I appreciate their sharp insights and humor.

Brooklyn-born Lori Robbins began dancing at age sixteen and launched her professional career three years later. She performed with Ballet Hispanico, the St. Louis Concert Ballet, and the Des Moines Ballet. Robbins is the author of Murder in First Position, which won the Indie Book Award for Best Mystery, was a finalist in the Silver Falchion, and is long listed for the Mystery and Mayhem Book Awards. Her debut novel, Lesson Plan for Murder, won the Silver Falchion Award for Best Cozy Mystery and was a finalist in the Indie Book Awards. She is an expert in the homicidal impulses everyday life inspires.