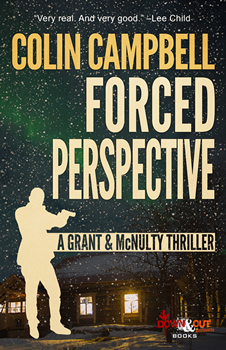 Colin Campbell took a long and dangerous route to a life as a full-time crime writer. A three-year stint in the British Army led to a 30-year career as a police officer in West Yorkshire, where he served as a beat cop, a jailer, a scenes of crime officer, and a plain-clothes crime manager—all positions that helped shape his two series characters, ex-vice squad officer Vince McNulty and rogue Yorkshire cop Jim Grant. Campbell brings the characters together for FORCED PERSPECTIVE, which finds the pair setting up a sting operation that lures wanted criminals to a deserted Palm Springs car dealership under the guise of auditioning as extras in a Titanic Productions film. (Campbell’s fans will recognize Titanic as the Boston-based production company that employs McNulty as a technical advisor.) The sting goes mostly as planned, but it’s just the opening act for Grant’s real plot: taking down a Colorado crime lord who also happens to be a movie buff.

In his latest interview with The Big Thrill, Campbell talks about his writing process, bringing his two series leads together, and his plans to move a supporting character into the spotlight in an upcoming standalone.

By now, your regular readers are pretty familiar with Vince McNulty and Jim Grant, who have headlined several novels and short stories. When it comes to writing series characters like Vince and Jim, how do you strike a balance between character growth and staying true to the qualities that attracted readers to them in the first place?

I mainly think of character growth as being a reaction to events. There is a saying, “It’s not the shit that happens to you but how you deal with it.” So Jim Grant is shaped by the traumas of his past, although he tries to put a smile on it, and Vince McNulty is still coping with being abandoned as a child, with a slightly less convincing smile. More recently, they are both shaped by events as they happen, and any change in their character grows organically from that. Neither of them is going to suddenly become a song-and-dance man.

Do Vince and Jim still surprise you from time to time?

Some of the choices they make surprise me, which they shouldn’t since I’m the one making the choices for them. But yes, as each page ends, I have to decide what they do next, and sometimes the obvious choice takes a sharp left turn and I think, “Wow, I didn’t see that coming.” The biggest surprise this time was, I didn’t know Grant and McNulty knew each other. They were conceived as completely separate entities, but my agent at the time, Donna Bagdasarian, suggested bringing them together. It made sense since they’re both Yorkshiremen who were cops in the same city. After that, it was a case of ensuring there were as many differences as there are similarities. Them both being basically me in a different dress.

What’s the key to creating effective villains for Vince and Jim to take on?

Ah, the key, creating-the-perfect-villain question. To be honest, I just go with the flow. The story will decide what the conflict is, and the conflict will dictate who the bad guy is and what they want. With McNulty, it is often about child abuse, given his past. With Grant, it could be anything. Grant is a cop right down to his boots, so “bad people doing bad things” is all he needs to know. In both cases, the villain needs to have enough power to make their lives difficult and be nasty enough for the reader to dislike them. We’ve come a long way from the bad guy simply wearing a black hat and kicking the dog.

You spent many years as a policeman in the UK before writing your US-set thrillers. What’s the most surprising thing you’ve learned about American policing?

How polite everyone is. There always seems to be a please and a sir attached to any request, and nobody seems to raise their voice. My main recollection of policing in West Yorkshire is you called a spade a spade and said it loud and clear. I remember being told that a good policeman can talk to the lord of the manor and the lowest form of life and make them both understand what you’re telling them. I probably wouldn’t swear as much at the lord of the manor.

The other thing, of course, is guns. I started out with a truncheon and a whistle. We didn’t even have stab vests until much later. I had a cape and a helmet, for Christ’s sake. Carrying a gun all the time—that would shit me up.

You started out writing horror novels back in the early aughts, and it seems like your switch to crime fiction was a gradual thing, with your early novels blurring the lines between the genres. Do you see horror and crime fiction as two separate genres, or do they sort of bleed into one another?

No, I think they are two separate things. When I first thought about writing I was influenced by my love of Stephen King—the tension and suspense parts more than the gruesome bits. I suppose you could argue that there is true horror in real life and especially in some of the crimes I have encountered, but it was the supernatural elements I had trouble accepting. I was always making the main character skeptical or a non-believer who eventually accepts the spooky stuff. It’s much easier to write about real-life horror because seeing is believing. And I have seen it.

You are, of course, a film buff. What movies have influenced you the most as a writer?

I don’t think films have influenced my writing so much as inspired it. I love the strong man who gets the job done type of character such as James Bond or Dirty Harry. Or the man with a past whose quiet life is turned upside down and he has to use his skills again, such as [the 1974 Charles Bronson character] Mr. Majestyk, who only wanted to get his melons in. Some of the Bronson or Clint Eastwood strong silent types. More recently I would say that Elmore Leonard’s Raylan Givens in the TV show Justified was a big influence. That slightly jokey dialogue where Givens tries to defuse a situation instead of escalate it—Jim Grant is always trying to do that. I did myself. Nobody ever tried to hit me when I was smiling at them.

Tell me a little about your writing process.

I used to outline the entire book before I started writing it, but now I’ve taken a leaf out of Reed Farrel Coleman’s book: Go with the flow and don’t outline anything. Thanks, Reed. It’s much more enjoyable because the plot develops as I go. It’s like reading a story that hasn’t been written yet. As for my routine? After breakfast, I check my emails then write until lunchtime, always ending with the beginning of the next page so I know where I’m going. Typing it using Word. Then I send the Word.doc to my Kindle to read at bedtime after whatever book I’m reading. Currently Lee and Andrew’s latest Reacher novel, Better Off Dead. I don’t revise it until it’s finished, at which point I do two more drafts, the first to clean up any typos or mistakes and the second to format my personal copy for printing and saving to Kindle. After that it’s on to the next one. Book 41 at the moment.

What aspects of storytelling came intuitively, and what aspects did you have to work to learn?

I love reading. I love the flow of a sentence. Words on a page. The rhythm. So I think the sound of the words came easy. I think it was Stephen King who said it should read as if he was telling the story around a campfire. I like that conversational tone. My grammar is terrible. I have no idea what an adjective or an adverb is. I just know what sounds right. Thank God for editors.

I like writing both. I have written several standalones; they just haven’t been published yet, especially the children’s books. Any offers welcome. The beauty of the series is you get to hang out with your favorite characters again. Live in their world. It’s like reading Jack Reacher or watching James Bond. It’s not even about the plot or the villain. I just like Jack and James. Or Grant and McNulty.

I’ve just finished a Jim Grant prequel when he was in the army, Operation Snow Queen, and a standalone, Burgos, about a female detective who was a secondary character from a previous standalone, Night Delivery. And I’m writing Book 41, Shorts Ends, where McNulty comes back to Yorkshire on a family matter that turns nasty. Just not supernatural.