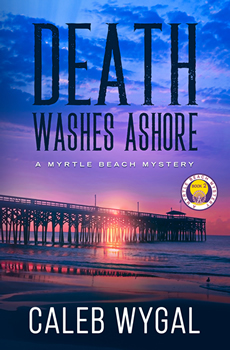 If “Why did you become a writer?” were a multiple-choice question, “Because I needed to look busy” probably wouldn’t be one of those choices. But that’s exactly what led Caleb Wygal to write the short stories that inspired his 2006 debut novel, Moment of Impact.

Wygal worked for his uncle’s hearing aid business back in the early aughts, and his preferred method of passing time was reading books. That wasn’t exactly the image his uncle wanted to present to his clients, so he told Wygal to find some other way to fend off boredom between answering phone calls and changing hearing aid batteries.

“He pointed at the computer on my desk and said that he didn’t care what I did when people were in his office—just look busy,” Wygal says. Since the office didn’t have Internet access, he turned to writing short stories inspired by kids he’d grown up with in central West Virginia. Those stories eventually became a YA novel, and Wygal sent the first 30 pages to any publisher who accepted unagented submissions until one finally offered him a contract, complete with a $1 advance.

Fifteen years and several novels later, Wygal still has that $1 bill in a frame in his office, and he’s still writing novels. His latest is DEATH WASHES ASHORE, a cozy mystery set in Wygal’s adopted hometown of Myrtle Beach, South Carolina. It’s a follow-up to last year’s critically acclaimed series launch, Death on the Boardwalk, about a bookstore owner who’s swept up in a murder investigation when a corpse turns up at his shop’s back door. DEATH WASHES ASHORE picks up just minutes after Clark Thomas’s first mystery ends; this time, local police recruit him to help solve the murder of a popular local entertainer.

In his latest interview with The Big Thrill, Wygal talks about the inspiration for his new mystery, the appeal of cozies, and the challenges of being both a writer and a stay-at-home dad.

For starters, please give us a little background about what inspired the central mystery of DEATH WASHES ASHORE.

Myrtle Beach is known for its large-scale dinner shows (Medieval Times, Pirates Voyage, etc.). One day while watching a performer for one of these shows do an interview on local television, I wondered what would happen if someone of this person’s status, that is very well-known in the area, washed up dead on the beach one morning. I tried to think of something similar that didn’t involve pirates or knights and came up with a dinner show called Gladiator Games. The lead gladiator in the show became our unfortunate victim.

The first Myrtle Beach Mystery, Death on the Boardwalk, was very well received. What kind of pressure did you feel for the second installment?

What challenges came with writing a sequel as opposed to a series launch?

With the first book in a series, you create the characters and this world for them to inhabit. The challenge for me, as my main job currently is as a stay-at-home dad, was to keep track of the characters, their traits, and story arcs from the first to second books. I didn’t create a series bible with that information as I wrote Death on the Boardwalk. (Not a mistake I’ll make again. I have one now, though.) That is sometimes difficult to do when most of my writing happens before the sun rises and my son wakes up. I get a limited number of hours to not only write but do most of the marketing for my books in a week. Once he’s awake, it’s all play, play, play until bedtime. Naps are a rarity these days. Trying to remember those details in the dark at 5:20 a.m. was the biggest challenge I faced.

Has writing these novels made you look at Myrtle Beach any differently?

We hadn’t lived in Myrtle Beach for very long when the inspiration to write this series struck. I’ve met many readers in the area since the release of Death on the Boardwalk, and they have collectively helped me appreciate it more. Before moving here, we always saw it from a tourist’s perspective. Speaking with readers and local residents about these books shed a different light on the area. After living here for nearly three years, I appreciate what the area has to offer for day-to-day life even more.

What’s something locals know about Myrtle Beach that tourists don’t?

Ha. Where and when to park to avoid parking fees.

Tell me a little about your main character, Clark Thomas, and how he took shape for you.

I wanted to have a smart, relatable character who was stuck in a rut when you first meet him, and have some sort of tragedy in his past (i.e., his wife’s sudden death two years prior) that he hadn’t been able to move on from. Finding a dead body one morning behind his bookstore, I felt, was the perfect way to start to break free from that rut without him realizing it was happening. I didn’t want to write a series of standalones, so I had to have a plan on how this tragedy would play out, and how his character would change over the course of the series.

What’s one thing about Clark that you’re excited to explore over future installments?

The surprises he is going to come across as he tries to unravel what happened to his wife. There’s some bombs lurking there that he currently has no idea are waiting for him. I can’t wait to see how he reacts to them.

Of the many mystery/thriller/crime fiction subgenres, what drew you to cozies?

I’m always drawn to well-told, solid, clean mysteries that don’t have graphic descriptions of murders, strong language, and sex scenes. For me, it’s about solving the puzzles, and for the most part, that’s what cozies give you.

I’d love to hear about your writing process. What gets you from idea to finished manuscript?

Without realizing I’m doing it, I do my best thinking in the car or shower. Perhaps it’s the rare solitude. Those two places are where I seem to have most of my ideas, either for a novel, scene, character arc, or overcoming writer’s block. I’m more of a discovery writer than a plotter. I’ve plotted, but never stuck to the script. I write my ideas and long synopsis for a story down in a notebook, put it away, and almost never look at it again. It’s my way of bringing a story into the light. I have a loose, loose blank outline saved where I list all the suspects, their possible motives, where they were spoken to first, a lie they told, and a truth they told. I write out the first round of questioning, noting any red herrings I want to drop in the story, and go from there.

At this point, I have a grip on the story I want to tell, how it will flow, and some key scenes. Then I write the beginning and end of the book. After that, the task is finding the time to get time to write. Now that I’m working on my seventh book in 15 years, the process is getting easier.

Going back a bit, can you tell me about your path to publication?

I didn’t always want to be a writer. When I was in my 20s during the 2000s, I worked for my Uncle Russell at his hearing aid business. I would take calls, schedule appointments, and handle some of the glamorous work like changing hearing aid batteries and cleaning out the ear wax. In between, I read a lot of books. So much so that one day he told me I couldn’t read books anymore. He pointed at the computer on my desk and said that he didn’t care what I did when people were in his office, just look busy. He didn’t have the Internet back then, so I started writing short stories based on kids I grew up with in central West Virginia. Eventually these stories coalesced into what would become a YA novel, Moment of Impact. I mailed off the first 30 pages to as many publishers as I could find accepting submissions. Eventually, one got back to me and said they’d publish the book. They offered a $1 advance, which I gladly accepted. Three publishers and 15 years later, I still have that $1 bill in a frame in my office. DEATH WASHES ASHORE is dedicated to Russell.

What can you share about what’s next for you?

I am currently most of the way finished with the third book in the Myrtle Beach Mystery Series, Death on the Golden Mile. I have at least two more planned out in the series, with ideas for many more. The Grand Strand of Myrtle Beach never lacks for inspiration. In between, I’m going to write more on my Lucas Caine adventure series that involves him and a friend finding lost treasures and artifacts based in the southeastern United States. My son will start school in two years, and I’m planning on moving into writing full-time when he does. For now, I’m going to enjoy telling stories and being “Daddy.”

His two Lucas Caine Adventure novels, Blackbeard’s Lost Treasure and The Search for the Fountain of Youth, were both semi-finalists for the Clive Cussler Adventure Awards Competition.

He is currently at work on the third book in the Myrtle Beach Mystery Series, Death on the Golden Mile.

He lives in Myrtle Beach with his wife and son (the munchkin).