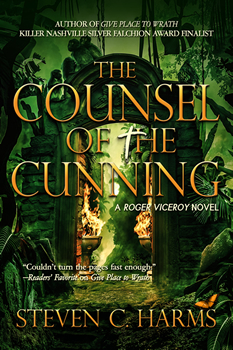 In THE COUNSEL OF THE CUNNING, Steven C. Harms brings us the next in his Roger Viceroy mystery series.

In this installment, Viceroy receives an unexpected knock on his front door from billionaire and former US Senator Jürgen Sandt. The past has come back to rear its ugly head. A decade prior, the senator’s only son disappeared into the jungles of Guatemala, and Sandt must convince Viceroy that further investigation is now necessary after a package left mysteriously outside the family estate opens the door to the possibility that his son is still very much alive.

Viceroy’s search steers him and his team from the back streets of Milwaukee to the stealthy corridors of Washington, DC—an eerie trek that will ultimately lead to an ancient site that supposedly doesn’t exist. As Viceroy closes in on the truth, a parallel plot emerges. Not only could it point to the reason behind the cryptic disappearance of Bertram Sandt, but it could also launch a deadly battle that will put millions of lives at stake. On pure instinct, Viceroy knows nothing is adding up. Somehow, somewhere they missed a clue, and if it’s not discovered soon…it may be too late

The Big Thrill recently checked in with Harms to learn more about the series and what this latest installment has in store for readers.

For those new to the series, can you give us a little background about it?

The series is centered on detective Roger Viceroy and his team, Regina Cortez and Trevor “Silk” Moreland, based in Milwaukee (my hometown). The first book, Give Place to Wrath, introduced the team with Viceroy as the head of the Midwest Region Special Crimes Unit, Wisconsin Division, a regional investigative agency placed in five states. A bombing in a Milwaukee suburb launched their involvement that quickly turned into a manhunt for a serial killer. Throughout the book, Viceroy dealt with a pending divorce. As the second book opens, the agency is being shuttered, but Viceroy receives a surprise visit from a former US Senator from Wisconsin. He’s there to ask Viceroy to pick up the trail in finding his only son who disappeared a decade prior in Guatemala, as the senator is convinced he’s still alive. Viceroy and team take on the hunt. 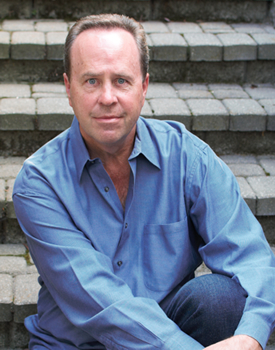 Can you tell us more about your main character, Roger Viceroy? What has his journey been like up until now?

Viceroy started as a detective for Milwaukee PD, which eventually led to him being hired by the FBI. There, he became known for his zealous focus on the micro details of every case as he believes that’s where the answers always reside. When the Midwest Region Special Crimes Unit was formed, Viceroy was tapped to lead the agency, and he hired Cortez and Moreland to round out his team. Viceroy was a careerist, in that he never had time or interest in having a family life until he met his wife, Debbie, in his late thirties, who also was never married. Their relationship moved quickly and they married, but she fled him not long after the honeymoon and filed for divorce. The first book begins as he’s dealing with that situation with no clear understanding as to why she left.

The title of this book, THE COUNSEL OF THE CUNNING, and the first book, Give Place to Wrath, are from a faith-based position, but speak to universally accepted secular moral principles. This book’s title is around the concept that an individual’s evil and/or acutely selfish plans will always be held to accountability and come to cease. The faith part of this series, and this book, is quite subtle. It is a secular mystery. Upon completion, I hope the takeaway for the reader is a moment of reflection on what the title is all about.

I’m a huge fan of mystery/thrillers because of the combination of suspense, good vs evil (in most cases), the landscape of life and being able to take almost anything and turn it into a story that fits the genre, plus the thrill and challenge of trying to figure out the end as a well-written novel unfolds.

In my view, it’s critical that the story is unique (or that there’s a unique twist) and consistently builds, chapter-by-chapter, a perfectly blended mix of plot and intensity while keeping a reader guessing until the end. The hope is I will write a story where the reader thinks they have it all figured out, until the final leg of the book and I can spin their head with a “didn’t see that coming” finish. And I’ll add that, in my view, the character development of the antagonist is an essential element to immersing a reader deeper into the story. The trick is to show their human side and build believability and perhaps even some small degree of empathy or understanding, but to do so without giving away who he or she is.

What’s your favorite part of the writing process and why?

The creativity of it all. I’m not an outline guy. I start with a “what if” premise and land on the broad idea. Then before I ever tap out the first sentence, I’ve figured out in my head the beginning, the end, and some of the middle to advance that plot. The rest of the book, the bulk of it, is filling in the gaps. I hold to my story, but the gap-filling is where my characters sort of take over and lead me in directions I didn’t foresee. The results are sometimes dead ends, but more often than not, they lead me down paths that greatly enhance the plot or add a layer to a character that aids in building the story arc and ultimately a deeper reader buy-in.

Steven C. Harms is a professional sports, broadcast, and digital media business executive with a career spanning over thirty years across the NBA, NFL, and MLB. He’s dealt with Fortune 500 companies, major consumer brands, professional athletes, and multi-platform integrated sports partnerships and media advertising campaigns. He’s an accomplished playwright having written and produced a wildly successful theatrical production which led him to tackling his debut novel, Give Place to Wrath, the first in the Roger Viceroy detective series which earned awards from Killer Nashville and American Book Fest. The second book, The Counsel of the Cunning, is due out in fall of 2021. He’s a member of Mystery Writers of America, International Thriller Writers, and Sisters in Crime. A native of Wisconsin, he graduated from the University of Wisconsin-La Crosse. He now resides in Oxford, Michigan, a small, rural suburb of Detroit.