A Thrilling Trip into Digital Danger 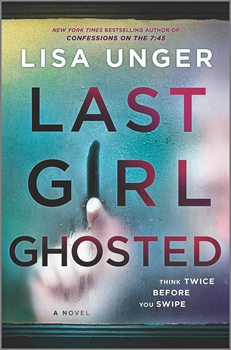 If you’ve spent any length of time in bestselling author and newly-elected ITW co-president Lisa Unger’s fertile imagination, you’ve likely seen the emergence of several themes in her work—a fascination of how technology has changed human interaction, the ability to make setting, specifically “homes,” a character of its own, and birds. Yes, birds.

“I do have a bit of a bird obsession,” she admits. “It’s kind of minor in that I don’t do a super ton of research about birds, but they have been finding their way into the work. And I’ve learned that a lot of people have a deep-seated fear of birds.”

Unger’s 2019 novel, A Stranger Inside, featured a bird photographer whose living room is filled with stuffed birds, and the book’s original title was The Nightjar, which is a type of hawk that hunts at night. Last year’s short story series, House of Crows, included, well, crows of course. And there’s even a crow in her latest release, LAST GIRL GHOSTED.

The bird references don’t stop there, either. LAST GIRL GHOSTED features Wren Greenwood, a single woman who runs an advice column called “Dear Birdie.” Her seemingly normal life is upended, however, when she takes advice from her friend Jax and sets up a profile on Torch, a fictional dating app. After a couple of false starts, Wren soon meets Adam, an irresistibly charming man who lures her in with a quote from renowned poet Rainer Rilke.

“Rilke is like the hook for any kind of thinking bookish girl who is a romantic,” Unger says. “His poems were actually his love letters to God. But I can’t think of a better worm for someone like Wren.” 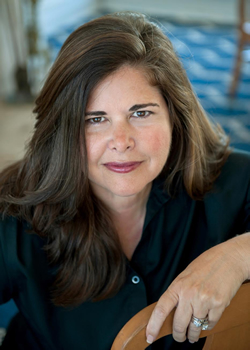 Indeed, Wren falls hard for Adam, and for three months, their connection is electric. Could it be love? Wren believes Adam is as into her as she is him—until one day, after she reveals particularly personal things about herself to him, he sends her a text saying that he’s sorry, but something has happened, and he has to go. His dating profile is deleted, his phone disconnected.

Wren is gutted—but she also isn’t the kind of girl you want to ghost. She sets out to find Adam—to find out why he just up and left—but instead, discovers disturbing evidence that proves she wasn’t the first girl Adam has done this to. There were others, other girls who also thought they were in love. Girls who then went missing.

Wren might not be the first girl Adam has ghosted—but she’s determined to be the last.

Unger says she got the idea for the book after a conversation with a friend who was giving online dating a try. She’d become frustrated not only by the seemingly endless pool of choices, but also the inability to “connect” on a deeper level—how could she know if she’d swiped right on Mr. Right?

“Over the last 20 years, online dating has really become the main way single people are meeting each other,” Unger says. “And you can scroll and scroll and not know how to choose. Because you’re not looking for a toaster. Love is a head trip, not an algorithm.”

Unger notes that before online dating became popular, you met people through your community, your friends, your local environment. Someone you knew knew them or of them. Strangers weren’t truly strangers. 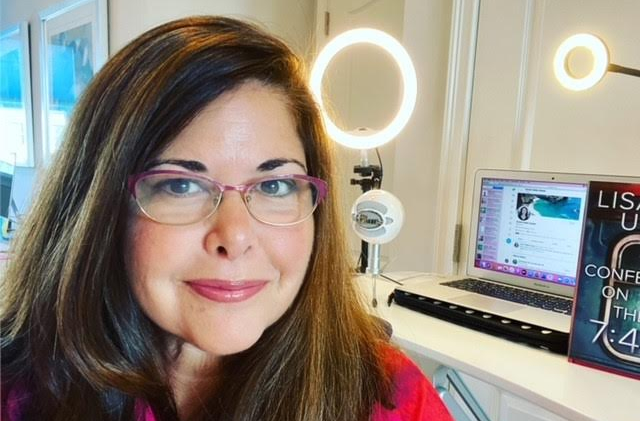 Virtual events have become the new normal these past couple of years.

“There were external reasons why you couldn’t treat someone badly, you couldn’t discard them because they didn’t measure up,” Unger says.

But in this technology-driven environment, you meet a stranger, and if things don’t work out, they disappear a stranger as well. “The advance of technology has really made human connection that much more challenging. In the last 100 or so years, technology has evolved, but our brains have not. Not even a little. And so there’s a real disconnect about how our brains handle this tech, and it makes us feel connected when in fact we’re further apart than we ever have been. We’ve taken this primal desire for a mate and turned it into a technological endeavor using curated versions of ourselves.”

Unger explored this concept—the idea that what we post on social media, for instance, the snippets of life we’ve been able to crop for the specific story we want to tell—in last year’s award-winning novel Confessions on the 7:45. It’s another of those recurring themes—like birds—that permeates her recent work.

“I have an ongoing obsession with technology,” she says. “Not with tech exactly, but with how it’s affecting us as people.” 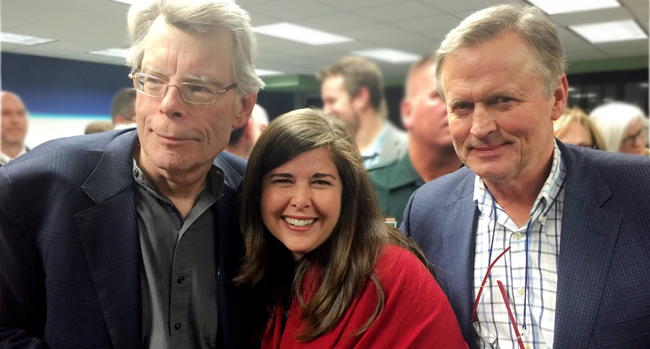 Unger attends a VIP reception with Stephen King and John Grisham at a 2016 fundraiser event hosted by State College of Florida.

Which makes sense, since one of the hallmarks of Unger’s work is her ability to craft meaningful relationships and characters that linger long after you’ve finished the book.

In LAST GIRL GHOSTED, Unger lasers in on the importance of having a “tribe,” specifically girlfriends that provide unconditional love and support.

“I feel like the female friendships I have had in my life have been some of the most powerful relationships I have had,” she says. “As much so as my family of origin, and close to the relationship I have with my husband. There’s a lot of mean girl fiction in literature, the idea that women can’t support each other. And I think that patriarchal idea keeps us less powerful than we could be. All of the mentors in my career have been women I admire, the kind of women who send the elevator back down.”

The kind of people Wren needs to rely on if she’s to survive being ghosted.

As is customary with Unger, she’s tight-lipped about next year’s project—“it’s mainly done”—but no doubt it will include memorable characters, a strong sense of place, a tightly woven plot that unravels at perfect pace…and maybe a mention or two of birds.