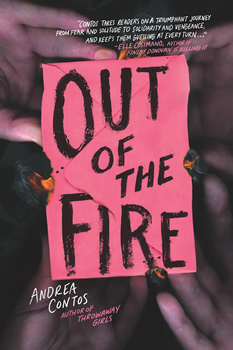 ITW Award Nominee Andrea Contos comes by her love of mysteries and thrillers naturally. You might even say crime—or at least, crime-solving—is in her blood, thanks to her father, a Detroit police detective who still contributes to his daughter’s research with investigative knowledge and tours of the morgue.

Even so, she didn’t leap immediately into the crime genre.

“I sort of stumbled into crime writing,” she says, “though the two adult fantasies I’d written prior to my debut always had a mystery element. So when the next idea came to me as very much a contemporary novel, I decided to lean into the elements that I’d always loved in storytelling, and my first mystery/thriller was born!”

Her father’s tutelage covered more than the ins and outs of police work. Contos says, “My dad always told me to find a career I loved because it would never feel like work. Turns out, he was very wrong about that! (Sorry, Dad.) I love writing, but sometimes it absolutely feels like work. Sometimes, you have to make yourself do it anyway.” Of course, everyone needs and deserves a break sometimes, but Contos knows there are also times when you just need to sit down and put fingers to keyboard. “Plus,” she adds, “writing always feels better than not writing.”

Her latest novel is OUT OF THE FIRE, a YA novel about vengeance, trauma, and friendship. Asked to tell a bit about the book, she says, “My elevator pitch is that it’s about four girls who band together to exact the justice the world won’t give them. It has complicated relationships, plenty of action, a very creepy villain, tons of suspects, and some pretty amazing friendships.”

OUT OF THE FIRE has a complex plot. The main character, Cass, comes from a dysfunctional family and is haunted by her recent kidnapping and subsequent stalking. The other three girls also face painful emotional issues. Weaving these multifaceted characters and their various traumas into a single coherent narrative was a challenge. Even so, Contos felt honored by the opportunity to explore and give voice to the problems faced by teenaged girls today.

She says, “It was very important to me to show that there are consequences for actions, and that even if something is justified, there may be those who disagree with what you’ve done. And in the book, even the girls themselves disagree on what’s ‘right’ some of the time.”

These conflicting elements are a hallmark of good crime fiction, a genre that is often demanding. Contos says, “I love writing mystery/thrillers for the same reasons I hate writing mystery/thrillers: the details, the razor-thin balance between making an ending feel earned and giving it away, the delicate mix of showing true depth of characters while keeping the pace at a speed that won’t let readers put it down!”

She’s always looking to push boundaries with her books, exploring viewpoints from traditionally underrepresented voices. For OUT OF THE FIRE, she wanted to challenge the typical view of female agency. “Far too often women, girls, and their trauma serves as a catalyst for the male MC’s motivation, and I wanted to show these girls fighting back and taking control, no matter how unfair their circumstances.”

So how does she do it? “None of my process is pretty!” she says. “It’s usually in the car, with my laptop perched precariously while I wait for one of my kids to finish whatever activity they’re doing. I am a total pantser (aside from knowing the ending—that’s non-negotiable) until about 50 percent, where I start outlining.”

That said, she’s a very linear writer. “Especially in crime writing, so many scenes build off the ones before it, and I like to have the full and complete scope of what’s already happened before I write the next scene.” As a result, her first drafts are remarkably clean, and she usually does very little editing before sending it off to her editor and/or agent.

Asked what she hopes readers will take from her books, Contos says, “So many things. First and foremost, I hope they love the characters. Even though I write mystery/thrillers—which can tend toward very plot driven—I hope readers remember my characters long after the book is over. And hopefully that opens a different point of view for them, or lets them see the world a little differently, or with a little more understanding and compassion.”

But she also wants to entertain her readers. “I want them to be surprised and delighted by a twist they don’t see coming. It’s important to me that those twists feel earned, though! And that readers can look back in the book and see the clues were there all along.”

Above all, she hopes her books will help teen girls everywhere. “[I want them to] see that it’s okay to be angry when someone has wronged you, and that there are people who will support you and help you through the fire as well.”

Like many crime writers, Contos has a theory about the enduring popularity of crime fiction. “As strange as this may sound, I think there’s a certain amount of comfort that comes with crime novels. Readers know what to expect, and they can count on the writers to give it to them.

And I think it’s always fun to engage your brain while solving the mystery right along with the protagonist—it lets us step inside a world that’s very much ours, but when you close the book, you’re not actually responsible for solving the murder!”

Like most professional writers, Andrea Contos has built her career through luck, perseverance, and hard-won wisdom. She admits her key piece of advice for writers may be the hardest to follow: “Eyes on your own paper. It is so easy to compare everything in this industry, but there are precious few constants. Every writer has their own path, so focus on yourself and the only thing you can control—the writing.”

Of course, Contos has a new project in the works—a second book coming out next fall with Scholastic, tentatively titled Tell Me No Lies. “It’s from the points of view of two sisters,” she says, “and it’s filled with betrayals and secrets and hopefully more than a few twists! But I also love how much it highlights the sometimes fraught but always unbreakable bond between siblings.”