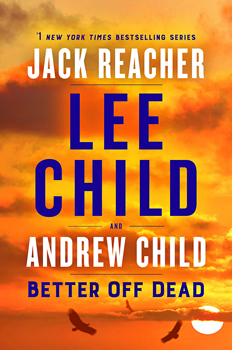 It’s been more than a year since bestselling author Lee Child shocked the thriller world by announcing that he would no longer be writing his popular Jack Reacher novels alone—and sometime in the not-so-distant future, wouldn’t be writing them at all.

But Child wasn’t about to entrust his franchise to just anyone—and as most Reacher fans know, the baton is being passed to Child’s talented younger brother, multi-published-author, Andrew Grant. As far as succession plans go, it’s a solid bet. Not only was Grant the first to read Reacher’s entry into the literary world, he’s more than got the chops to keep the series going.

The brother proved that with last year’s well-received The Sentinel and with this year’s action-packed BETTER OFF DEAD. The novel kicks off as many of the Reacher books do—Childs’ hero inadvertently wandering into a new…situation. In this case, it’s a Jeep that has crashed into the only tree for miles around, a woman slumped over the wheel.

She isn’t dead—but she does entice Reacher to help her find her twin brother who, of course, might be mixed up with some dangerous people.

Reacher is good at finding people. But this very well may be his riskiest search ever.

In this interview with The Big Thrill, we checked in with Grant—writing as Andrew Child for the Reacher books—to see how he’s settling into the series and what he hopes to bring to his brother’s franchise in the coming books.

BETTER OFF DEAD is the second book since you started your collaboration with Lee on the Jack Reacher novels—and I continue to be impressed by the smoothness of the transition / collaboration. How was the collaboration different—if at all—this time around? Are you doing more of the actual writing?

Thank you! We were aiming for the smoothest possible transition, so I’m delighted that you think we’re moving in the right direction. The way we worked together on BETTER OFF DEAD was essentially the same as with The Sentinel—figuring out “what happens next” between us, then emailing the document back and forth as we fine-tuned the writing. But there was one major difference. With The Sentinel, we had two pre-determined goals: Lee wanted to nudge Reacher a little closer to today’s technological landscape, and I wanted to reintroduce some of Reacher’s devastating wit and sarcasm that had somehow disappeared from the earlier books. So with BETTER OFF DEAD, we felt we had achieved those things, so we could just let it rip with no preconceived goals and have a blast telling the best story we could think of.

Do you think there will come a point where you are doing all of the writing on the Reacher books?

That’s the plan! The goal is for the transition to be as seamless as possible, so we felt the best way to accomplish that was to work together at first, then Lee will gradually step back and leave me writing alone.

You’re a successful novelist in your own right—I’m a huge fan of the Detective Cooper Devereaux and Paul McGrath books, in particular. The voice on those novels is very different from that of the Reacher books. What has it been like for you to slip into Lee’s unique voice? (And how do you feel the fandom has accepted you overall?)

Thank you! I’m very proud of those books, so I really appreciate your kind words. The strange thing about writing them, though, was that I had to work very hard to avoid sounding like Lee. I think our natural writing voices are very similar, but I wanted my own books to be distinctive, so I tried to ensure they had a different tone. Now, on the other hand, I can write in a way that comes naturally to me, and one thing that makes me very happy is that no one has yet been able to distinguish between my writing in the last two books and Lee’s.

BETTER OFF DEAD begins with a great hook—what can you share about the inspiration for this one?

We started out by talking about the overall tone and atmosphere we wanted to set for the book, and then I started thinking about what turned into the second scene. I imagined it being the opening, but realized there was a better, more dramatic way to do it. I wasn’t sure I could pull it off, so I decided to put it down on paper and see if it worked. I thought it did, so I sent it to Lee and he loved it, so we pressed on from there…

In an interview I once did with Lee, he said many of his fight scenes are inspired by his former years as a bit of a “tough guy.” The (many) fight scenes are still realistic and tight in BETTER OFF DEAD. What do you use as a “muse” as you write those?

For me it’s a combination of a mis-spent youth followed by several years of karate training.

I know neither of you are heavy real-time researchers. Where did the background for Michaela Fenton come from?

Michaela’s character came indirectly from a lot of reading I did a while ago about the use of chemical weapons in the recent Gulf Wars and the treatment—which sometimes struck me as very unfair—of the soldiers who were harmed by them. I got to thinking about how I might feel and what I might do if I was in their shoes, and the impact it could have on my family.

In the same way James Bond’s “face” has changed over the years as a new actor takes on the role, fans expect a slight shift in Reacher in your capable hands. How are you balancing reader expectations vs. your creative process?

That’s a very interesting comparison. As you say, each new actor who plays Bond sets out to put their own stamp on the character. My approach here is the opposite—I love the way Lee created Reacher, and my goal is to continue in exactly the same vein. I think the author should be invisible because what’s important is the character and the relationship the readers have with him. And I think I understand what the readers expect in that relationship because I’m one of them. In fact, I was the first one, ever since reading Killing Floor when it was still written in pencil more than a quarter of a century ago.

Change is hard sometimes. But it also leads to growth. One of the reasons Lee said he wanted to pass the baton to you was to infuse “new life” into the series. As you look to the future, can you share ideas on some of the ways you intend to do that?

Our father used to say that he liked things “to be the same, only different.” So with that in mind, I intend to keep Reacher’s character the same (although we may see different aspects of him from time to time) but to put him in new situations so that he has the chance to keep doing all the things that the readers love but in fresh, vibrant ways.

Speaking of the future, what can you share about the next Reacher book? Anything on your solo projects?

We started the next book on September 1st, in keeping with Lee’s tradition. It starts with quite a bang, but beyond that I’m afraid I’m not allowed to say too much! As for my solo books, I’m in the early stages of another Paul McGrath adventure, and so far I’m having an absolute blast with it…