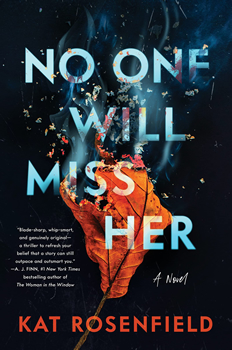 “My name is Lizzie Ouellette, and if you’re reading this, I’m already dead. Yes, dead.”

This is the first line in bestselling author Kat Rosenfield’s newest thriller, NO ONE WILL MISS HER.

Someone murdered Lizzie Ouellette, the daughter of the town’s junkyard owner. Stabbed her and cut off her nose. The whole town considered her trash—the junkyard girl. Fitting since she’d grown up next to the dump. They even nicknamed her “Junkyard Jezebel.”

As Lizzie admits, “I was no saint in life, but death has a way of making you honest. So, here’s my message from beyond the grave, the one I want you to remember. Because it will be important. Because I don’t want to lie. They all thought I had it coming. They were right.”

All signs point to her drug-addicted former-town-football-star, Dwayne, as the killer. He’s missing, after all.

Nothing like this had ever happened in Copper Falls, Maine, but State detective Ian Bird is determined to solve the mystery. If the killer wasn’t Dwayne, could it be one of Lizzie’s clients? Adrienne and Ethan Richards, a wealthy couple from Boston, were renting Lizzie’s lake cabin, and they are also missing. Ethan is even a criminal, “one of those fancy, white-collar bad guys who floats away on a golden parachute and lands gently in a pile of cash while the company he looted burns to the ground.”

Lizzie believed the elegant Adrienne was her friend—she shared her secrets with Lizzie. But then Lizzie realized that what she considered friendship was just Adrienne confiding in her because she didn’t care what Lizzie thought. “Confessing her sins to me was comfortable, liberating, precisely because I was nothing.”

As Bird conducts his investigation, he learns no one is who they seem. He tries to figure out what made Lizzie “such a unique combination of punching bag and pariah? Copper Falls was a place where your role was assigned early and permanently. Once people had decided who you were, they’d simply never allow you to be anyone else.”

Lizzie had always understood that “people see what they expect to see, once they think they know who you are,” and she uses this to her advantage.

The narrative alternates between Lizzie speaking from the grave, what happened at The Lake, Adrienne’s story in The City, and Bird’s investigation. As the threads of the story become entwined, the second half of the book surprises readers, making us say, “Wow, I didn’t see that coming.”

Here, Rosenfield chats with The Big Thrill about what gave her the idea for the novel, what motivates her characters, and how her journalistic experiences informed the story.

What was your inspiration for the story in NO ONE WILL MISS HER?

I rarely have a good answer to this question, but in this case, it’s actually a song: “No Children” by The Mountain Goats, which is about two people going through a horrible divorce. The song is narrated by the husband, and there’s a line in which he describes himself drowning—and pulling his wife down with him, “hand in unlovable hand.”

Toxic relationships, and particularly toxic marriages, are a pretty rich vein for thriller writers to mine (see: Gone Girl, and all its many homages). I was fascinated by the idea of a couple who know they can’t make it, who probably never should have been together in the first place, and who have gone so far past the end of love that there’s nothing left between them but poison, but who keep holding on because if they let go—of the relationship, and of each other—they have nothing. How does a marriage like that end? The answer is that someone has to die.

How did your experience as a pop-culture and political journalist inform the story?

For me, journalism and fiction are linked by the same sort of curiosity, a sense that telling stories is the best way to understand the world. NO ONE WILL MISS HER touches on many of the same issues of identity and conflict that also fascinate me as a culture writer. There are the stories we tell ourselves about who we are, and then there are the ones other people tell about us. Maybe none of these stories are true, or maybe they all are.

No matter what I’m writing, whether it’s cultural analysis or a crime thriller, I’m always seeking answers to the same questions: Why do people do the things they do? What are we doing to each other?

How is the Lizzie character empowered in the story?

I think she’s empowered by her humanity, for better and for worse. Every woman in this story—and every person, for that matter—has agency, makes choices, and contains the capacity for both good and evil. This might be a book about murder, but there are no hapless victims here.

I hope readers continue contemplating the story and the characters when it’s all over, but I’d never presume to tell them what to think.

“You are using too many em-dashes.” (As am I. The first step is admitting you have a problem!)

I am the proud owner of a dog who looks like a mop, and a cat who looks exactly like Tsar Nicholas II of Russia.