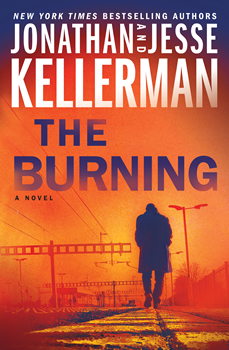 To say the Kellermans are one of the thriller community’s most well-known and prolific authors might be an understatement. Not only are Jonathan and Faye Kellerman bestselling authors of their own merit, their son Jesse caught the writing bug early—in his toddler years, to be more precise.

“I started writing for my own gratification when I was three or four,” he says. “I’d come to my dad and dictate a story, which he would take down and then staple together in a book. My first was Apple of Danger. (Followed by Pear of Danger, Orange of Danger, etc.) It’s interesting to note that this began before my father had published his first book, so I wasn’t aping him, per se. I think it’s more that every family speaks its own language, and ours was narrative.”

That dialect has taken the Kellermans on a journey of great literary success. While each continue to have solo success, the most recent Kellerman installment is the fourth book in Jesse and Jonathan’s collaborative series featuring Deputy Coroner Clay Edison.

In THE BURNING, set against the California wildfires, Edison is called to the suspicious death of a wealthy man who was shot in his hilltop home. But he soon learns this is not just “any other case”—he’s shocked to learn his somewhat estranged brother Luke may be linked to the crime. And that’s when things get personal.

THE BURNING is a page-turning tale of family, revenge, and murder that continues the father-son tradition of writing compelling and compassionate characters—even the bad ones. In this interview for The Big Thrill, they talk more about it.

A review of THE BURNING in the New York Times reads, “The Kellermans show compassion for the survivors” and I love that, because it’s certainly a trademark of your work. Why is that important to you as writers?

Compassion for all characters is fundamental to our work. Even the worst human beings have a point of view, and while we might not agree with the things they do and say, it’s important to inhabit their perspectives as fully as possible. Without that, character devolves to caricature. 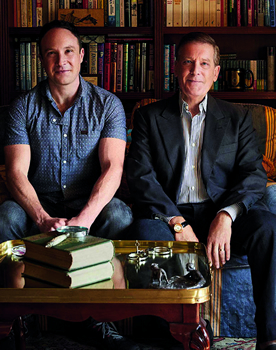 THE BURNING is the fourth book in the Clay Edison series—with the first three getting great reviews. Was there anything about Clay that surprised you as you were writing?

Clay is full of surprises—that’s why we continue to write about him. He’s decent and smart, but also human, and in this book we see him pushed to the brink of his decency and wits. Putting him under extreme pressure brought out the deep loyalty he has to his brother—surprising, perhaps, because throughout the first three books that relationship has been so strained. The roots are deep, though.

Although I’m from Canada, I grew up in British Columbia and am unfortunately quite familiar with wildfires and the destruction they cause. THE BURNING is set against the wildfires of California. How have those fires impacted your writing in terms of providing the spark for this novel?

It’s interesting, because we plotted this book thinking about the 2018 wildfires. As it happened, a lot of the writing itself took place during the summer and fall of 2020, which were even worse in terms of the air quality where Jesse lives (Berkeley). So we were able to draw directly on events and sensations taking place right outside the window.

Writing collaborations can be difficult at the best of times, never mind when the authors are related. How do the two of you navigate your writing relationship?

We have an excellent partnership, and that comes from the fact that we had a terrific relationship as father and son long before we were co-authors. We also expect to have a good relationship after the collaboration ends. That’s the point: the relationship is more important than the collaboration and always will be. So there’s no room for ego-driven shenanigans. We come to the page with mutual respect and a desire to write the best book possible.

In THE BURNING, we focus a lot on Clay and his brother, Luke. What can you share about the inspiration for their sibling dynamics?

The complex relationship between Clay and Luke has been present throughout the entire series to date, but in THE BURNING the tensions come to a head, with all the guilt, anger, and remorse built up between them spilling out. There was no direct inspiration from our own siblings. It’s worth noting, however, that in our previous collaboration (The Golem series) we reworked the story of Cain and Abel. We are both students of the Bible, and the book of Genesis is full of sibling strife—Cain and Abel, of course, but also Jacob and Esau, Joseph and his brothers, etc. There’s something primal about those conflicts that makes them timeless.

What can you share about what’s next for Clay Edison? And also, please feel free to discuss any upcoming individual projects.

The next book (which we’ve started) will once again take Clay far out of his comfort zone. That’s as much as we can share right now. Jonathan continues to work on the Alex Delaware series. Jesse has several side projects which he’ll get to…someday.