Character Born Out of a Single Line 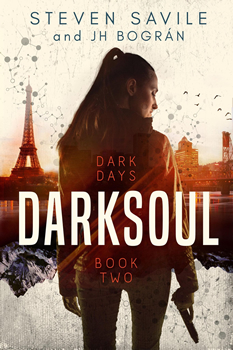 Authors Steven Savile and J.H. Bográn have impressive solo careers. Both are agented with several published books under their individual belts, and Savile and Bográn each have ghostwriting gigs to keep them busy when they aren’t writing their own projects—or collaborating on the Dark Days series. (In the spirit of full disclosure, Bográn is also an editor for The Big Thrill.)

The series actually began with Sunfail—though its inception and execution was entirely of Savile’s doing. In it, he introduced (among other characters) Sophie Keane, a problem solver…and an assassin.

After reading the book, Bográn became fascinated with Sophie’s character arc, and he wanted to know more about her. So much so that he pitched the idea of working with Savile on a sequel—or perhaps more accurately, a prequel. That became DARKSOUL, the second book in what is now the Dark Days series, and marks the first of a collaboration effort between Savile and Bográn, authors who have never met, but who clearly are in literary sync.

DARKSOUL is very much Sophie Keane’s story, and in it, we learn that there are some lines even she isn’t willing to cross. Testing a new antidote serum on innocent children is that line, even if it could have the potential to top a pandemic and save millions of lives.

In this interview for The Big Thrill, Savile and Bográn talk about how DARKSOUL is not a pandemic book (despite its eerie parallels), writing authentic female characters, and how they navigate collaboration. 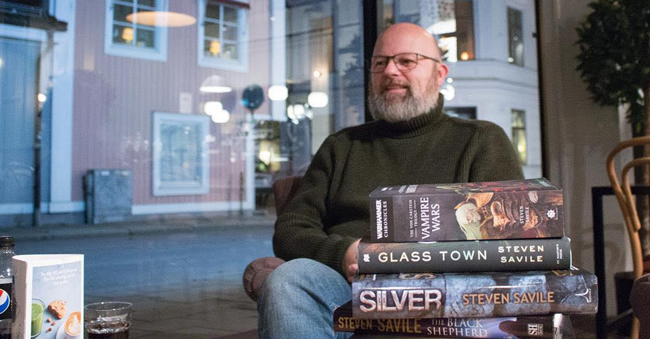 Savile with several of his books

In DARKSOUL—Book 2 in the Dark Days series—we are reintroduced to Sophie Keane, a powerful fixer and assassin. I’d love to know more about the inspiration behind her character.

Steven Savile: Sophie began life as a single line. She sent a message on a voicemail, “I’m not who you think I am…” That kicked off Sunfail. To say I knew what was coming for her would be a whopping great fib. I loved the idea of an ex-lover seeing the woman who broke his heart on the news and suddenly hearing she’d detonated a bomb in the middle of Paris that had claimed hundreds of lives. I mean, you get that message, you put it together with what the world is saying about her, and how you react is going to define your main character. (This was covered in Sunfail and a second line, this one a throwaway one about how Sophie became the enemy of her employers that caught Jose’s imagination and had him emailing me to say, you know… you need to tell this story!)

J.H. Bográn: Actually, I think my email was a bit more daring, along the lines of “I’ll write it if you can’t.” Sophie’s story arc in Sunfail struck a chord in me. I felt the character had been short-changed, and I wanted to do her justice. Imagine my surprise when Steven wrote me back a year later saying, “Let’s do it!” 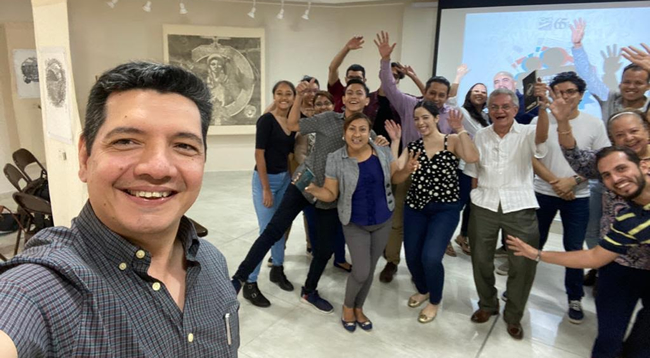 Bográn snaps a pic after teaching a film appreciation class.

It’s a bit of cliché question to ask how two men write such an effective female voice, but Sophie is a fleshed-out character that women (and men) can relate to. How do you achieve that authenticity?

SS: For me, the secret (like there’s actually a secret) is to treat the character as a fully rounded person, with motivations, fears, goals, and responses dependent upon who she is and what has shaped her. It’s far too easy in this genre to simply write a male hero and switch the pronouns and just hope to get away with it. Or to go too far the other way and turn the character into someone who basically looks to use her feminine wiles to get whatever. I would say, however, as I guy who grew up with strong female role models in my life and married a brilliant woman who stands on the front line with all of the health care workers during this pandemic, I don’t know how I could ever write a woman who wasn’t fleshed out and 100 percent authentic. 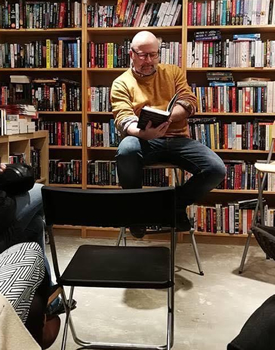 In DARKSOUL, you’ve given Sophie a mission that changes her—the testing of innocent children. What inspired this story?

SS: I’ve done a bunch of ghostwriting for some famous hip-hop artists. Some of these guys are obsessed with stuff like the Illuminati and conspiracy cults, etc. Many years ago, one of them, Prodigy from Mobb Deep, sent me an article he’d been reading about rich men looking to defeat aging by taking the blood of young children—such a brilliant thriller notion, how could you resist it?

JHB: Steven references this notion as a throwaway line when describing Sophie. As a reader, I was impressed, and as an author I wanted to run with it.

What was the most surprising thing you learned about Sophie in writing this novel? How will it impact future stories about her?

JHB: Her resilience. DARKSOUL is a thriller, but a character-driven one at heart. It all began with Sophie for me, and getting to know her was an interesting journey. Dark Days is an unusual series in the sense that the second book is in fact a prequel to the first one. Both DARKSOUL and Sunfail are open-ended, and that allows for more stories to be told. Ultimately, it would depend on the readers. They want more, we will deliver!

Collaboration can be tricky—I’d love to know a little about how J.H. Bográn and Steven Savile work their magic to combine two unique writing styles and create one cohesive story/series. 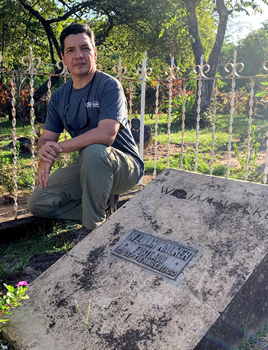 Bográn beside the tomb of executed “filibuster” William Walker

SS: The trick, for me, is to set out the parameters pretty early. Work out what you’re going to do in terms of division of labor, ideas, etc., and who will have final cut. I warned José early on, because this was Book 2 in a series, I’d be the final voice to keep it coherent stylistically with Book 1… so we worked out the basic premise of the story, then I gave him free rein to create chaos, and he delivered a first draft that I second drafted, adding about 50 percent to in terms of word count. I’m sure he’ll tell you I changed every single line he wrote without changing anything.

JHB: I’d worked on other people’s IP before, but never so closely with the author, and having Steve clarify bits or traits for me was an awesome experience. He was a generous co-author and let me run with the story as far and wide as I could. I even managed to influence the Dark Days world. And yes, reading the second draft where I could see it was the story I had written, but using different words in some parts felt weird at first. Then again, a friend of mine who also writes with a co-author gave me a useful piece of advice: “Check your ego at the door.” It worked.

DARKSOUL has a bit of a “ripped from the headlines” feel given that ZERUM is intended to provide an antidote for pathogens that can create a pandemic that will wipe out vast populations. How much of the book was influenced by our current real-life pandemic?

SS: None. Hand on heart, I got bogged down in deadlines on other stuff, and DARKSOUL sat on my computer well before the pandemic began—I think the original idea for Zerum as a thing was hatched around 2015/16, with me promising José it was coming… soon. Always soon. Again with the ghostwriting side of my life, I was approached about 10 years back to come up with an idea for a Fox News presenter, something where Big Pharma intersected with Big Banking, and one of the ideas I’d come up with was this idea of corporations blackmailing nation states by releasing pathogens into their society and selling them the cures. It’s a pretty simple setup, but I liked it enough to keep for myself. The trick was for José to make it come alive and make sense beyond high concept. That’s the joy of teamwork.

JHB: I wrote the first draft in early 2018, almost two years before the word “pandemic” had entered the everyday vocabulary. This just proves how a high-concept idea can become a reality in such a short time. In short, DARKSOUL is not our “pandemic book.” On a trivia note, Zerum was the working title for the book for the longest time. 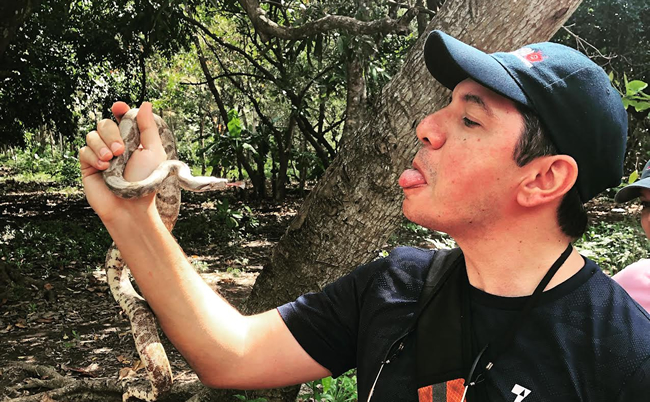 Bográn communes with a snake.

DARKSOUL has already released, and I think celebration is important for these kinds of milestones. What did you do to celebrate? Something collaborative?

SS: José? What shall we pretend? Something cool? I mean, anything has to be better than the reality.

JHB: Steven is a very generous co-author. He let me get away with quite a few things. The title, for one, came out of a brainstorming session through Facebook Messenger, of all places. Also, he let me choose the release date. September 15, 2021, marked the bicentennial of independence for Central America. Being Honduran, this provided me with some promo opportunities, and we’ve been featured in some of the festivities, from panels to interviews. And a local bookstore invited me to give the congratulatory message in all their social media channels. I recorded a video, and they shared it widely on the release date. As for Steven and I, since we’ve never met in person, the toast is put on hold until it happens. 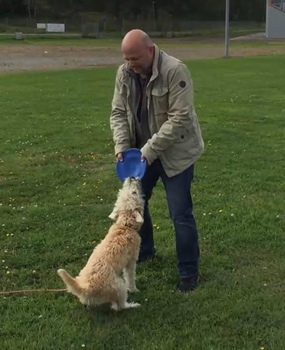 Savile with his dog

As you know, The Big Thrill is as much for aspiring writers as it is for readers. What advice would you give to writers who are interested in co-authoring?

SS: I touched on it above, but have a plan, a division of labor, set expectations out up front in terms of who does what, etc. Realize that the beauty of collaboration is that what comes out won’t be yours or theirs, but some brilliant fusion of somewhere in between. You couldn’t have written it this way yourself, and neither could they. So you’re genuinely creating something that is uniquely both of you.

JHB: I recently wrote about this very topic for Career Authors.

What are you working on next—both individually and as a collaborative team?

SS: My agent is currently shopping around a domestic crime novel, You’re Not Here, and a big fat political thriller, Blood Will Have Blood. I’m sketching out the basic plan for a new crime novel at the moment, no title, no clues… In terms of collaboratively, I’ve asked José how he’d feel about continuing the Dark Days world, or doing something quite different. We shall see!

JHB: My agent is currently shopping around an #ownvoices novel, The Scars We Hide. Fingers crossed for it. I’m willing to do another tour de force with Dark Days—there are many ways the story can move forward. I’m also currently writing an action-adventure novel set in the jungles of Honduras, and have some other ghostwriting projects that I can’t brag about due to their nature.