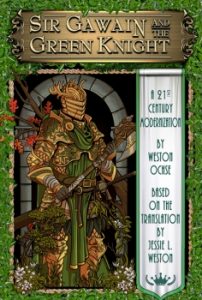 Sir Gawain and the Green Knight stands as one of the earliest literary memories of Medieval England, King Arthur and his Round Table, the mythical Camelot, and those knights who called it home.

In this classic tale of chivalry and adventure, a mysterious figure interrupts a New Year’s Eve celebration. Dressed all in green, he challenges King Arthur to a dangerous duel, but it is Gawain, the least of them, who is brave enough to accept the challenge on Arthur’s behalf. What follows is the young knight’s journey into the heart of darkness as he tries to survive the impossible.

Intended for students, academics, and fans of the Knights of the Round Table mythos, no treatment or contemporary retelling of Sir Gawain and the Green Knight is as complete and thrilling as this Dark Moon Books edition by USA Today bestselling-author Weston Ochse!

With themes of chivalric conduct, virtuous merit (doing the “right thing”), and fighting against greater odds, the story of Sir Gawain and the Green Knight is still as important, resonant, and thrilling today as it was when first written 700 years ago. 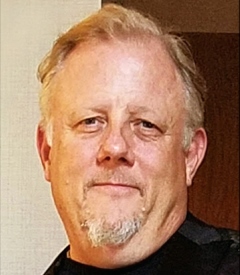 The excitement of adventures and battles with mythical monsters, and true love, and magic. The stories of Camelot and Arthurian Legend are timeless classics. The stories are tragic and thrilling—they connect with readers, and can be molded and interpreted to apply to individual lives in modern era.

That although the original author of “Sir Gawain and the Green Knight” is unknown, it is attributed as being the same who also wrote “The Pearl.” (Considered one of the most important surviving Middle English works, this poem relates the dream-vision of a mourning father who encounters an angelic woman and the Heavenly City.)

Also, loved learning about Reynard the Fox, which was a medieval literary convention dating back to the twelfth century, attributing all manner of human traits and actions to a wily fox as subject of adventure tales or voice of satire, often taking anthropomorphic (human-like) form.

Weston Ochse’s love for SIR GAWAIN AND THE GREEN KNIGHT began when he was ten years old. Not only did it inspire him to join the military in order to become a knight of the red, white, and blue, but also to seek higher education so he could more readily understand the great works that came before him. He holds a Master of Fine Arts from National University and has been published all over the world. The American Library Association calls Weston “one of the major horror authors of the 21st century.” His work has won the Bram Stoker Award, been nominated for the Pushcart Prize, won four New Mexico-Arizona Book Awards, and been a USA Today Bestseller. His military supernatural series SEAL Team 666 has been optioned to be a movie starring Dwayne Johnson. His shorter work has appeared in DC Comics, IDW Comics, Soldier of Fortune Magazine, and Weird Tales. His franchise work includes the X-Files, Predator, Aliens, Hellboy, Clive Barker’s Midian, and V-Wars. Weston is also a veteran of the US military, serving thirty-five years in the Army, special operations, and various agencies.