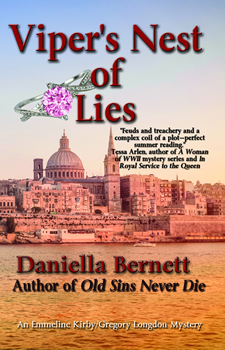 In Daniella Bernett’s VIPER’S NEST OF LIES, the discovery of a blood-encrusted stiletto knife in journalist Emmeline Kirby’s bag at Heathrow Airport triggers an avalanche of trouble stretching from London to Malta.

The body of Sebastian Jardine is soon found in the boot of Superintendent Oliver Burnell’s car, accusations begin to fly that he and Emmeline conspired to commit murder. None of her close friends is left unscathed by these evil machinations. Philip Acheson of the Foreign Office is forced to go on the run after Special Branch agents come to arrest him. Gregory Longdon, Emmeline’s husband and a jewel thief/insurance investigator with ties to the criminal classes and MI5, is on his own quest to prove her innocence.

At the heart of this web of corruption and revenge is Jardine, a man who supposedly died five years earlier, and his obsession with a fancy vivid pink diamond with a murky provenance.

Author Daniella Bernett was kind enough to take the time and answer a few questions for The Big Thrill regarding her latest novel—and beyond.

My heart is swelling because you find Emmeline and Gregory interesting and want to know more about their story. That means I’ve succeeded in my goal to have the reader make an emotional connection. Emmeline and Gregory are purely a confection of my imagination. However, many readers have told me that my characters have a depth to them. Such praise is highly gratifying. I wanted to create two people who were vastly different in nature and temperament. And yet, their contrasts and clashes shape the dynamic of their relationship. Each brings unique insights to every situation. At the same time, they share a code of honor and respect for one another’s abilities. As in life, I’ve imbued my characters with foibles and admirable qualities. They continue to grow and change. I think it is terribly important for characters to be believable because I’m asking readers to place their trust in my hands to take them on a journey of escape and pleasure. Any author will tell you that their characters are a bit of themselves. For me, each book is a personal exploration of the boundaries of my creativity. I strive hard to make each story stand out and (dare I hope?) better than the previous book.

What part of VIPER’S NEST of LIES did you find the hardest to write?

I wanted to create a story steeped in layers of deception that overlap and metastasize. To ratchet up tensions, the domino effect of danger had to ensnare everyone: a blood-encrusted knife is found in Emmeline’s bag; Gregory’s nemesis surfaces again and is out for revenge; a dead body is found in Superintendent Oliver Burnell’s car; and Special Branch agents come to arrest Philip Acheson of the Foreign Office. The challenge was ensuring that each thread tied to one another, as well as advanced the overall mystery that needed to be solved. Ultimately, my characters had to provide an answer to why the crime was committed. To do otherwise, I feel would be unfair to my readers.

Your biography says that you’re currently at work writing Emmeline and Gregory’s next adventure. Can you give us a hint about where you’re taking them next?

I’ll whisper in your ear. A Mind To Murder, Book 8, is set in London and Spain. The story is driven by jealousy, wickedness, and retribution for past crimes. To catch Gregory’s eye and spice things up even further, I’ve tossed in some diamonds. I’ll leave you to ponder the peril yet to come for Emmeline and Gregory. You’ll have to wait until fall 2022.

How do you incorporate your travels into your books?

Setting plays a prominent role in all my books. I consider it an important character all its own. It helps to establish the tone and to propel my story. I don’t travel specifically to conduct research for my books. Rather, the ideas spring to mind because a particular area has made a strong impression on me. That’s why I’m able to give readers a taste of the sights and sounds of the cities and their environs. I like to make readers feel as if they’re walking in my shadow.

As an American, what difficulties, if any, do you find in writing British characters and setting?

I’ve been an Anglophile since I was a wee lassie, as the Scots would say. I devoured books, television shows, movies, anything having to do with England and the UK. I’m a devoted Masterpiece Theater and Mystery fan. Therefore, I don’t have any difficulties creating British characters. Expressions are ingrained in me. I’ve also visited various parts of the UK, so I have a feel for the culture, attitudes and landscape.

My story is not the truth. The trick is to ensure that the lie has the absolute ring of truth to persuade readers that this could happen. Devising a hornet’s nest of intrigue to entice readers and provide an escape is both the challenge and opportunity that I took up when I sat down in front of my laptop. I want readers to be compelled to keep turning pages. I think, I hope, my imagination has come up with enough twists to sate readers’ appetites for adventure.

What defines you most as a writer? For me, it is a tantalizing exercise to conjure up trouble for my characters. The happily-ever-after scenario is a “dead end” from my perspective because the story has petered out. On the other hand, revenge and betrayal are motives I can greedily sink my teeth into because they always circle back to the question: What if? Those are two of the most potent words in an author’s arsenal because the possibilities are infinite.

Character is the engine that drives my narrative. Once readers make an emotional connection, I have them hooked because that means they want to know the story behind my protagonists. To achieve the right mood, setting plays a critical role in this book as in all my stories. Although one part of my mind is captivated with the beauty of an area, the other half is seized by a malicious glee because I have discovered the perfect backdrop for a murder. I’m of the opinion that danger lurks in beauty.

I wanted to explore how the thirst for revenge could blind someone to the truth, as baser instincts take control leading to lethal consequences for the guilty and the innocent alike.

Daniella Bernett is a member of the Mystery Writers of America NY Chapter and the International Thriller Writers. She graduated summa cum laude with a B.S. in Journalism from St. John’s University. Lead Me Into Danger, Deadly Legacy, From Beyond The Grave, A Checkered Past, When Blood Runs Cold and Old Sins Never Die are the books in the Emmeline Kirby-Gregory Longdon mystery series. She also is the author of two poetry collections, Timeless Allure and Silken Reflections. In her professional life, she is the research manager for a nationally prominent engineering, architectural and construction management firm. Daniella is currently working on Emmeline and Gregory’s next adventure.