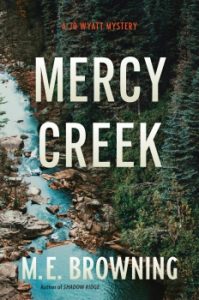 Of the two Flores girls, Marisa was the one people pegged for trouble. Her younger sister, Lena, was the quiet daughter, dutiful and diligent—right until the moment she vanished.

Detective Jo Wyatt is convinced the eleven-year-old girl didn’t run away and that a more sinister reason lurks behind her disappearance. For Jo, the case is personal, reaching far back into her past. But as she mines Lena’s fractured family life, she unearths a cache of secrets and half-lies that paints a darker picture.

As the evidence mounts, so do the suspects, and when a witness steps forward with a shocking new revelation, Jo is forced to confront her doubts and her worst fears before the killer makes another deadly move.

Part of the joy I derive as a writer is the opportunity to build the setting from the ground up, but MERCY CREEK required me to revisit a world that I’d already created. The challenge was to present the setting in a new light, complete with fresh observations, different locations, and compelling details. That challenge, however, also revealed an incredible opportunity to dig deeper. Each new character brought their own strong sense of perspective. It was a lot of fun to reflect on how I’d presented Echo Valley in Shadow Ridge, and then smash beyond those expectations with new insights in MERCY CREEK. 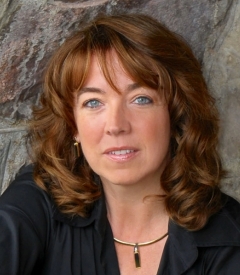 The jacket copy makes clear that all the characters grapple with long-ago misunderstandings that cast a shadow across current events and even impact an investigation. What the jacket doesn’t allude to is the unbreakable relationship that exists between Jo and her best friend, Aiden Teague—and the depth of what that friendship means to her.

This is both an incredibly easy and excruciatingly difficult question to answer. It sounds glib to respond that every novel I read is a lesson in craft, and yet that is true. Recent standouts include S.A. Crosby for his ability to capture raw emotions, Jane Harper for her skill creating vivid settings, and Jennifer Hillier for the courage to exploit the passions and fears of her characters.

MERCY CREEK is the second Jo Wyatt Mystery, so Detective Jo Wyatt, her partner Squint, several other characters, and the world they inhabit, were already established. But every book has its own story, and this one belongs to two sisters who are making their debut in this novel. From the start, their distinctive voices guided me as I explored how their family dynamics impacted the trajectory of the story. From there it was a matter of weaving together the plot, setting, and characters until it no longer mattered what element came first.

M.E. Browning served twenty-two years in law enforcement and retired as a captain before turning to a life of crime fiction. Writing as Micki Browning, she penned the Agatha-nominated and award-winning Mer Cavallo mysteries, and her short stories and nonfiction have appeared in anthologies, textbooks, and diving and mystery magazines. As M.E. Browning, she writes the Jo Wyatt Mysteries. The first in the series, Shadow Ridge, won the Colorado Book Award for Mystery and the silver medal in the popular fiction category of the Florida Book Awards. MERCY CREEK launches in October 2021.