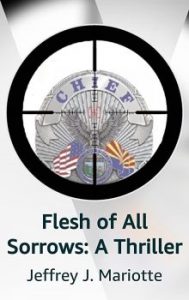 Newly minted police chief Danny’s Mansfield’s father, a former chief, became locally famous by catching the town’s most notorious serial killer. When it seems the real killer isn’t in prison, Danny risks destroying his father’s reputation, his brother’s political career, and his mother’s legacy to learn the truth. Meanwhile, the grandson of the original killer has discovered the old man’s trophy cache. He’s a supremely troubled young man in search of an identity. And he thinks he’s found it…

Jeffrey J. Mariotte recently spent some time with The Big Thrill discussing his latest thriller, FLESH OF ALL SORROWS:

I’ve done extensive research on the minds of murderers, and have written and lectured on the topic at events as varied as the Vail Symposium and the Tucson Festival of Books. Most “civilians” don’t understand what makes a serial killer or a mass murderer, and I’ve tried to address those topics in a fictional setting. The book also raises issues pertaining to police work in the modern era (pre-pandemic; future books in the series will address post-pandemic and post-“defund” efforts, etc.), because I’d like readers to understand the pressures on law enforcement in this new age. 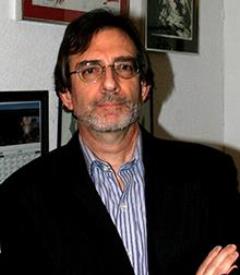 Everything I write has (I hope) elements of suspense that keep readers flipping the pages, and the books I like to read do the same. FLESH OF ALL SORROWS is a meshing of a police procedural with a serial-killer novel, and love both of those genres—this one’s sort of Michael Connelly meets Thomas Harris.

The book takes place in the very recent past—2019, just before the COVID-19 pandemic hit—but aspects of it reach into the 1970s and 1980s. Briefly, Danny Mansfield is a brand-new police chief, a job his father held years ago after his capture of serial killer The Bookbinder. Now it turns out that his father might have imprisoned an innocent man, and The Bookbinder might be back at work. Weaving the backstory into the current timeline was a real challenge. But at the same time, it enabled me to more fully reveal Danny’s family background and bring those characters to life.

Research for this book included conversations, some quite lengthy, with police chiefs in three different Arizona cities and participation in two different Citizens’ Police Academies. Those—in addition to ride-alongs I’ve done with various law-enforcement agencies over the years—really opened my eyes to the nature of police work in general, and specifically the role of the chief. In most agencies, the chief is a bureaucrat, divorced from the aspects of the job at which he or she was good enough at to be promoted. It’s a dramatic shift, and some of them would rather go back to the street.

I don’t know if it’s specifically a genre convention or just a general fiction convention, but I wrote protagonist Danny Mansfield’s sections in past tense and the villain’s (or one of them, anyway) in present tense. I wanted to make that character’s mental state—and the changes therein—very immediate, and present tense seemed to be effective. The book’s not a whodunnit, so that’s not giving away too much. I hope.

FLESH OF ALL SORROWS—in addition to being a gripping thriller—is a love letter to thrillers of the past, specifically what I consider to be a previous golden age running from the mid-1960s to the mid-1970s. The signature of serial killer The Bookbinder, captured by Danny’s father, is that he chose his victims based on their resemblance to characters in his favorite thrillers, and then he rebound those books in the flesh of his victims. I wanted to call out some books that I loved—and still love—from that era (albeit in a grisly way).

Oh, so many. In addition to being a writer, I’ve managed and owned bookstores—I was a founder and co-owner of Mysterious Galaxy—and I’ve worked in publishing, so authors and books have been major parts of my life. More specifically, a YA western novel called The Mystery of the Haunted Mine by Gordon D. Shirreffs contained aspects of mystery, thriller, western, and horror fiction, and I write in all those genres. Michael Connelly, T. Jefferson Parker, and David Morrell have been good friends, inspirations, and have kindly blurbed some of my books. William Goldman, Ross Macdonald, Stephen King, and James Lee Burke are continuing influences.

A common question or misperception about mass murderers is “Did he just snap?” The truth is, nobody snaps. There’s a process that drives people to that extreme, a series of factors, and it’s true in almost every case. They’re almost always young males; they’ve experienced violence in their lives, usually as victims; they’ve had contact with mental health professionals, law enforcement, or both; they’ve recently experienced a profound change that has affected their sense of their own identity; and they have access to firearms.

Jeffrey J. Mariotte has written more than seventy books, including original supernatural thrillers River Runs Red, Missing White Girl, and Cold Black Hearts, horror epic The Slab, and the Stoker Award-nominated teen horror quartet Dark Vengeance. Other works include the acclaimed thrillers Empty Rooms and The Devil’s Bait. With his wife and writing partner Marsheila (Marcy) Rockwell, he wrote the science fiction thriller 7 Sykos and Mafia III: Plain of Jars, the authorized prequel to the hit video game, as well as numerous shorter works. He has also written novels set in the worlds of Star Trek, CSI, NCIS, Narcos, Deadlands, 30 Days of Night, Spider-Man, Superman, Conan, Buffy the Vampire Slayer and Angel, and more. Three of his novels have won Scribe Awards for Best Original Novel, presented by the International Association of Media Tie-In Writers. He’s also won the Inkpot Award from the San Diego Comic-Con and has been a finalist for the Bram Stoker Award from the Horror Writers Association, the International Horror Guild Award, the Spur Award from the Western Writers of America, and the Peacemaker Award from the Western Fictioneers.

He is also the author of many comic books and graphic novels, including the original Western series Desperadoes, some of which have been nominated for Stoker and International Horror Guild Awards. Other comics work includes the horror series Fade to Black, action-adventure series Garrison, and the original graphic novel Zombie Cop.
He is a member of the International Thriller Writers, Sisters in Crime, the Western Writers of America, Western Fictioneers, and the International Association of Media Tie-In Writers. He has worked in virtually every aspect of the book businesses, as a bookstore manager and owner, VP of marketing for image comics/WildStorm, senior editor for DC Comics/WildStorm, and the first editor-in-chief for IDW Publishing. When he’s not writing, reading, or editing something, he’s probably out enjoying the desert landscape around the Arizona home he shares with his family and cats.