Horticultural Mysteries with a Touch of Magic 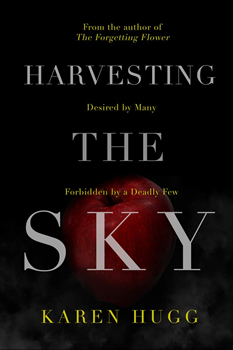 Karen Hugg was born into a Polish family in a Polish neighborhood in Chicago. “My older relatives came to America because they were seeking a better life,” she says. Then, in her early twenties, she moved west to Seattle…also in search of a better life.

The idea of making a life in a new city is deeply meaningful to Hugg, who also lived for a time in Paris. “It’s exciting,” she says. “You feel like anything is possible. And of course, it’s universal. We all want better opportunities and more happiness.”

That’s why Hugg’s books are often set in foreign countries and why several of her protagonists are Polish or Polish-American. Hugg explains, “I know those people. And there’s a special historical connection between France and Poland I’ve always found interesting.”

Hugg’s books fall into a niche of their own: literary horticultural mysteries with a touch of magic. 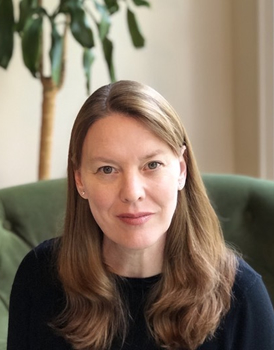 “I fell in love with plants as an adult,” she says. “I became a professional gardener and worked for almost 20 years in the industry. I always found plants beautiful and soothing and therefore totally inappropriate for fiction or thrillers. But scenes with dangerous plants kept popping into my mind. So when I finally opened the door to including plants in my fiction, my creative life clicked. I had ideas for novels, short stories, novellas, different genres. Now I have so many ideas it’s nuts!”

Her debut, The Forgetting Flower, is about a flower that erases memories. Her latest, HARVESTING THE SKY, is about an apple that heals. There’s a haunting quality to the writing, which explores such universal themes as trauma, guilt, and regret.

Asked about her writing journey, Hugg says, “Well, my dad died from cancer when I was about four and a half years old. As you can imagine, this spawned a fairly sad childhood for me. Once I discovered books, I escaped into the world of stories. They were like a salve. While my real life was painful, the lives of story characters weren’t. They went on great adventures, fought bravely, fell in love. Back then, I just wanted to live inside my books. Later, when I was about 10, I started writing my own stories. I’ve written stories on and off since then.”

She wrote her first novel in her early thirties as a way out of a deep depression. 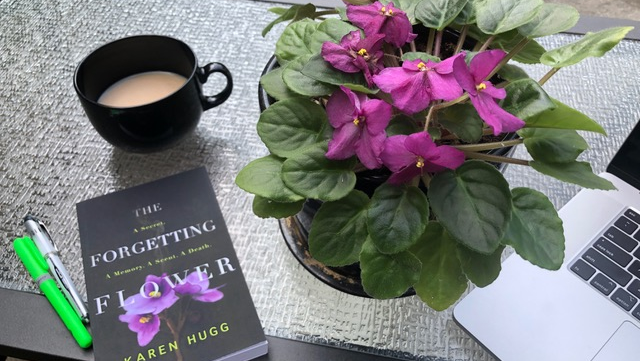 Hugg’s African Violet plant, the inspiration for her debut novel The Forgetting Flower

“My husband had encouraged me to focus my mind on an activity that would make me happy,” she says. “At that time, I’d been learning French and had finished a prolonged work stint in Paris a few years before. So I thought, All right, I’m going to write a story and throw in all the things I love: Paris, a unique plant, a classic epic story, a sci-fi premise, etc. But the story never felt quite right. I was working as a gardener, and I’d never fully included plants in fiction because they were too soothing and pleasant. But I had this dark scene with a thorny plant that haunted me. So I decided to rewrite the novel with a botany professor as the protagonist. The story clicked…And again, a book had healed my sadness.”

She says a typical writing day is “rather boring.” Wake up, drink tea, exercise, and write or revise. She breaks for lunch, checks social media, and writes some more. She works longer hours in the rainy winter season, and if she’s on a deadline, she sometimes works on into the evening, after dinner with her family. It’s a disciplined schedule, but somehow, she still finds time to listen to music and learn to play guitar. 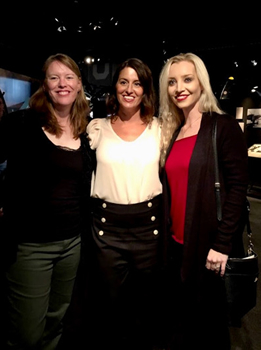 “I find it super relaxing,” she says. “My guitar teacher said to find favorite songs and learn those, so I’m working on my favorite songs by the Scottish rock band Travis. Their sound is so textured and melancholy and yet magnetic.”

Her latest book, HARVESTING THE SKY, is about a Polish-American horticulturist named Andre, who discovers a rare medicinal apple in Kazakhstan. “The discovery is personal,” Hugg says, “since his mother had a stroke and this apple could help her and others who are ill. So he returns to Paris with an apple sapling and grows more of the special trees, but a stranger thwarts his plans. He sends threatening notes and effigies, vandalizes his greenhouse, and more…and the apple trees may not survive.”

The book was inspired by several things. “First,” Hugg says, “that haunting scene I mentioned where my old protagonist stabbed himself in the wrists with the thorns of a plant. Second, I’ve had a mild fascination with apples, in terms of the stories in history and religion about them, and the fact that I have trouble eating them because they’re hard on my system. Third, my husband had cancer several years ago, and at the time I’d wished a simple but highly medicinal fruit could just boost his immune system and make him better. The good news is he did get better (knock on wood). Lastly, I’ll mention that I found a hidden work yard across the street from the Jardin des Plantes in Paris. This is part of the garden but isn’t public, where workers grow plants and such. Unless you walk down the driveway, you can’t see it. I fell in love with the idea of a secret greenhouse hidden away in the middle of Paris. So that’s where the setting landed.” 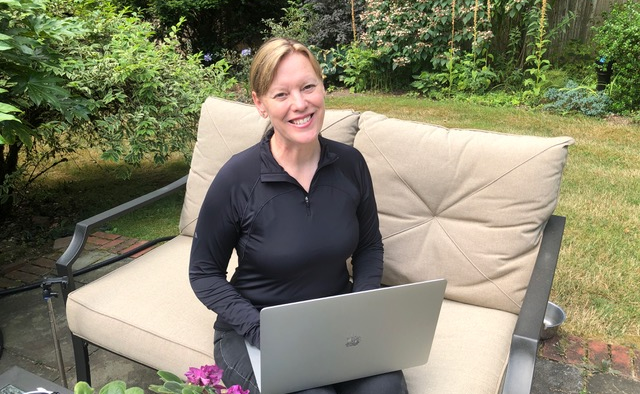 Hugg in her garden

Settings are among Hugg’s greatest strengths. Asked how she creates such a vivid sense of place, she laughs.

“I definitely wake-dream my novels. I’ve always had a vivid imagination. And I want to share what I see with readers in a sensory-rich but economical way. That includes short bits of sight, sound, smell, touch, etc. Plus, I think it’s about passion,” she says. “If I’ve been to the place I’m describing and loved it, I want to convey that intimate experience for readers. Of course, I’ve never hung off a steep slope so I had to figuratively put myself in Andre’s shoes for that Kazakhstan scene. But I’ve always admired plant explorers and the lengths they go to, to find new species. So when Andre’s hanging off that hillside, stuck in a prickly shrub and bleeding from his forehead, I wondered what his natural reaction would be, what he’d be most concerned about. The answer was simple. He’d want to save the apple sapling before grabbing the rope to save himself.” 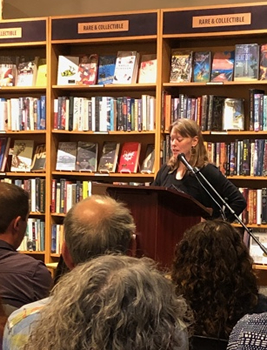 Hugg reads from her 2019 mystery The Forgetting Flower at Third Place Books near Seattle.

Hugg hopes her books lead her readers to see plants in a different light. “Plants are fascinating beings. They make their own food and survive just fine without us. Yet we don’t treat them very well, even though they’re a big reason we exist on this planet. I hope readers find them as alluring as I do.”

Hugg’s next project is another horticultural literary mystery called The Dark Petals of Provence. It’s the story of an American photographer who visits Provence for a photo shoot. But on her first night there, she accidentally photographs a teenage boy running through the lavender fields, covered in blood. Concerned for the boy, she snoops around, braving threats, obstruction, and vandalism. “In the end,” Hugg says, “when she stands up for what’s right, she reveals the village’s shameful secret they’ve kept hidden for years.”

Hugg is also outlining the follow-up to HARVESTING THE SKY, the third book in the Botanique Noire series. And she’s putting the finishing touches on a nonfiction self-help book, Leaf Your Troubles Behind (Prometheus, June 2022), about how plants can help you de-stress.