Even a Perfect Life Has Secrets 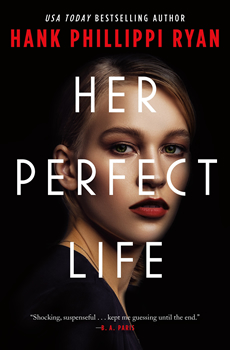 On Twitter, she’s dubbed #PerfectLily. That’s because Boston’s Channel 6 News investigative reporter Lily Atwood must be perfect when she’s on the air. Or at least, appear perfect.

In bestselling author and Emmy Award-winning journalist Hank Phillippi Ryan’s newest thriller, HER PERFECT LIFE, readers discover that even those of us whose lives appear flawless might have devastating secrets to hide.

Lily Atwood knows her life isn’t as perfect as she must appear on television. When she was seven years old, her sister Cassie—a freshman in college—vanished. And Lily has been searching for her ever since.

But Lily’s fans don’t know that. They adore her idyllic façade. The famous Lily smile is part of “The Lily package. The single-mom, career-woman, gorgeous, smart, having-it-all perfect package. Perfection is in the perception.”

Now, Lily has her own daughter, seven-year-old Rowen, who’s the center of her world. Lily never married Rowe’s father—he already had a wife, after all. Lily is determined to protect Rowe from anything that might mar the idyllic life they have together.

Lily’s news producer, Greer Whitfield, knows that perfect Lily wouldn’t be so perfect if she didn’t have Greer to organize her every move. And yes, she has resentment that Lily never asks about her personal life—which is nonexistent, with no family, not even a cat. Everything she does is for Lily.

When one of Lily’s informants feeds Greer information about Lily’s personal life, Greer can’t help but pursue it. Lily has a sister? And who is Rowen’s father? 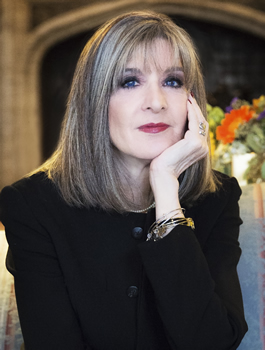 The idea that Cassie might still be alive takes center stage, and Lily wonders if finding Cassie would be a dream come true—or a disaster. As Greer knows, “grown-up Lily could not afford ‘something bad’ in her life.”

The narrative alternates between Lily and Greer in the present day and Cassie 20 years before, and we know their lives are on a dangerous collision course. Who will survive the ensuing crash?

Ryan wrote HER PERFECT LIFE during the pandemic—“It’s always safe inside a book,” she says. Here, she chats with The Big Thrill about her inspiration for the story and how her experience as an investigative journalist enriched the book.

What was the inspiration for the story in HER PERFECT LIFE?

It’s kind of like a Rubik’s cube, as I took a bit of experience and a bit of curiosity and a bit of observation and even a bit of philosophy—then I twisted and tweaked and changed, and out came a combination that’s a whole new story.

The beginning? Years ago, I was the weekend night anchor for the CBS affiliate in Atlanta. One night I came home after the show, after midnight, to find police cars surrounding my house. There had been a break-in, and the police told me that the burglar—who they caught—said that he knew I wasn’t home because I was on TV. Live on TV. The break-in was scary enough, but the burglar’s reasoning was incredibly chilling. That’s the reality of live television—viewers not only know where you are, but they also know where you aren’t. That was very disturbing.

As my TV years went by, I thought more and more about the spotlight. The spotlight is a fact of life for a television reporter, and that’s for better and for worse. We want people to watch our stories, we want to change people’s lives with our journalism, we want to make a difference in the world. But that also means that people recognize you. That spotlight is always there.

The job is very public. It’s designed to be public and relies on being public, and I embrace that. That’s also an immense responsibility—I’m proud of my work and thrilled that we’ve made a difference. 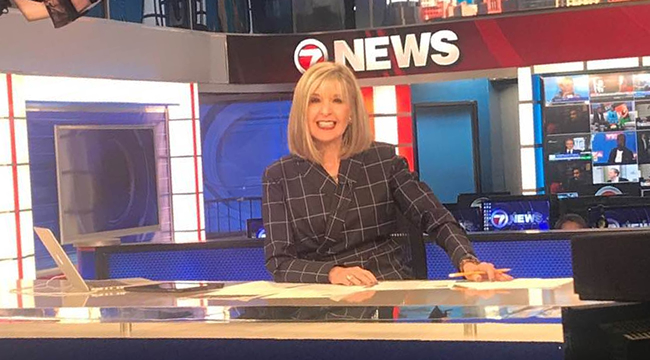 Ryan on set at WHDH-TV in Boston, where she has been a reporter since 1982 and won 37 EMMYs for her investigative reporting

But the times I walk down the street and a perfect stranger says to me, ‘Oh Hank, I love you’—that can be a little unnerving. They mean well, and I’m flattered. But because I’m always in their homes—on TV—they feel as if they know me. They’ve seen me, they’ve recognized me, and they’ve watched me, wondering whether to approach me—and then they do.

But they don’t really know me. We’re all very careful about our personal lives, and we try to protect that. After all, we chose a public career. That was a valid, conscious, intentional decision. And we chose all that comes with it, the wonderful and the worrisome. But our families have not chosen that. What if the spotlight puts them in danger, too?

What’s the danger of trying to have a perfect life, and what is perfect anyway? 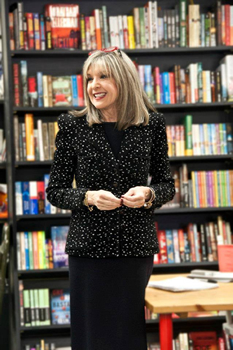 Ryan at an author event at a Boston bookstore Photo credit: Steve Bucci

That’s the absolute key to this book. The title is ironic, of course, because perfection is only in the perception. Perfection is only what someone else thinks, not what any of us believe about ourselves. But living up to that perception, in whatever way we can—no matter what we do in our lives—is a lot of pressure.

“These days—not just for journalists, but for anyone—the slightest error or slip or wrong move can become destructive and devastating. It can ruin your life. Everyone has a camera, and everyone is on social media. Anyone can use whatever snippet or failure to pounce on you in any way they decide.

Journalists are used to this scrutiny. In my stories, I can never make a mistake. I can never use the wrong word, or call people by the wrong name, or miscalculate, or get something incorrect. I cannot be one second late, I cannot look anything but camera-ready on TV. It all has to be… perfect. And at any moment in a live broadcast, anything could go wrong.  And all the while, I know a million people may be watching.

There are reporters on television who appear calm, well-dressed, and self-assured, when underneath they’re probably worrying and stressed every second of the day. Bottom line—there is no way to be perfect, even though the world’s expectation is that you are.

How did your experience in investigative journalism inform the story?

No one keeps a secret without a reason. That is such a key to HER PERFECT LIFE. Each of those 37 EMMYs on my shelf represents a secret someone tried to hide. A secret that I researched, documented, focused on, and pursued. Then I wrote a story about it—essentially turning it into a little movie and putting it on TV. I made it public. And that comes with its own pressures.

One of my former news directors once said, “A good investigative reporter comes to town and works until everyone hates them.” He was right. Even though my intentions for stories are for the greater good, someone is often harmed. People have called me, screaming, asking how I could have done this to them. I have to answer, “You did it to yourself.”

There is constant gauging of every element in the journalistic decisions about what story to pursue. And every decision must be perfect. As Lily Atwood learns, that’s impossible. In HER PERFECT LIFE, the focus of the investigation changes—to her!  Reporter Lily Atwood is all about revealing secrets—but what if someone reveals a secret about her? How will she handle being on the other side of the equation? 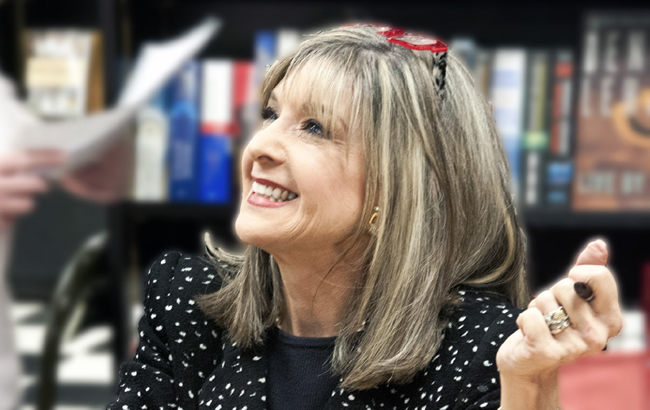 The lives of popular general journalists appear to be scrutinized by the public. How is this dangerous, and what are some of your personal experiences under the public’s microscope?

I need to make sure you know that what I say is not in the nature of a complaint! It’s tricky to write about the spotlight—no one likes to hear people whining about being famous, right? So I tried to be very careful with Lily Atwood—savvy readers will beware of making judgments about her based on what other characters say.

But for me, 40-ish years ago, when I had just started in television, I had gone to the laundromat to do some laundry. (Glamorous, right?) While my stuff was in the dryer, a person approached me to discuss a story they wanted me to do. I was pleasant and polite, but 25-year-old me went home and called my mom, complaining. “I can’t believe someone came up and talked to me in the laundromat,” I whined.

My mom was silent for a moment, and then she said, “You chose this job in the spotlight. Welcome to the spotlight. And I never want to hear a complaint about this again.” She was right.

And that’s what I wanted to reveal in HER PERFECT LIFE—that when you’re in the spotlight, you may be asking for trouble.

And I can tell you—I’ve been threatened, punched, pushed down, stalked, slapped with lawsuits, called at home, and had people waiting for me as I left the station at night. One of my protections on the job is that I always work with a photographer, as every television reporter does. I’ve always told my camera person that if someone hits me, make sure you’re rolling. Gotta get that video.

In writing fiction, every day is not a test. Every day is one more page, one more scene, one more chapter. It’s arithmetic. And if you add, add, and add, you can later tweak and polish and discover the book you meant to write.

What is a fact about you that your fans might not know?

I am a terrible, pitiful, hideous, embarrassingly bad singer. I mean terrible. Sometimes I ask my husband to identify a certain song, and when I try to sing it, he doesn’t recognize the tune.

In high school, I was also briefly a majorette. But I was so terrible that the band director put me in the middle of the back row and told me: “Just pretend to twirl.”

Thinking about it, that’s what I do in writing. Some days, I just pretend to twirl. And then, on other days, I realize I don’t have to pretend. I love what I do and happily march ahead.